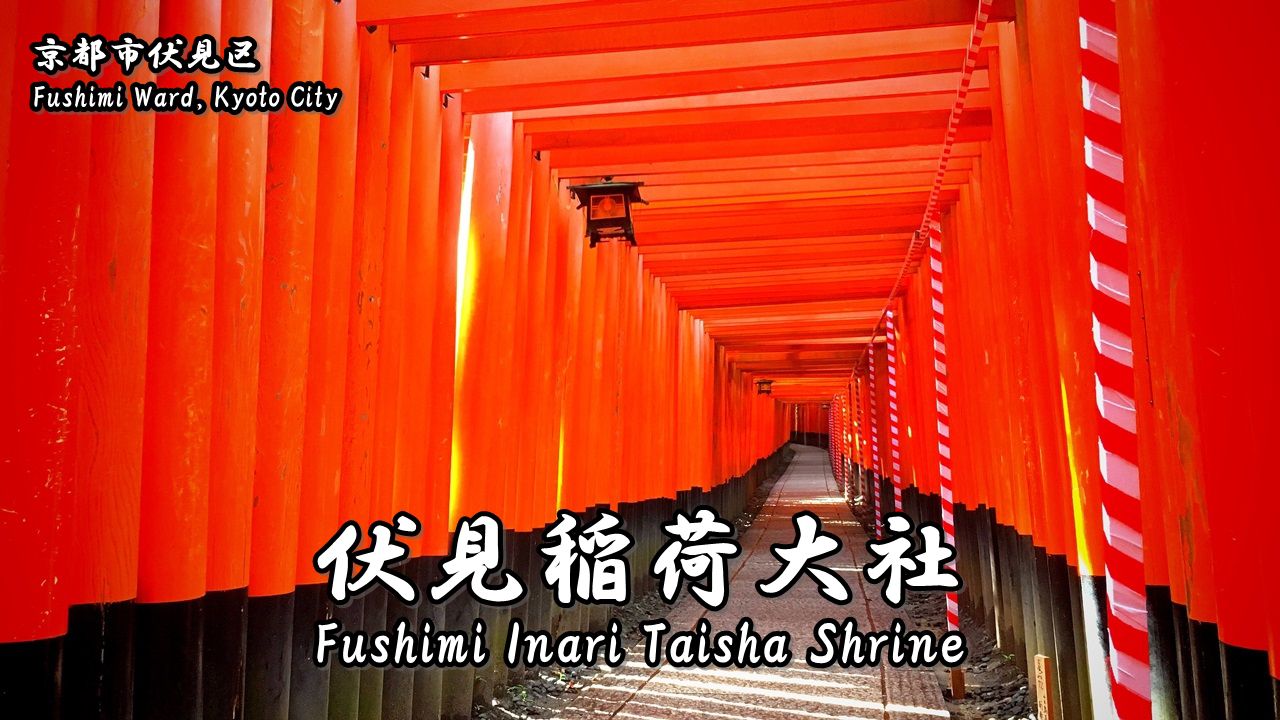 Fushimi-Inari Taisha Shrine is the very famous sightseeing spot that Kyoto boasts to the world.

This shrine is famous for words called “1, 000 torii gates”, and there are many torii gates in this shrine.

This shrine is too famous and is also crowded very much every day.

If you go to Fushimiinari with much effort,

“I want to see the sights slowly in the time when it is not crowded!!”

“I want to take the clean photograph which other person does not appear in!!”

I have some good news for you!!

I visited to see whether Fushimi-Inari Taisha at the early morning is not really crowded. 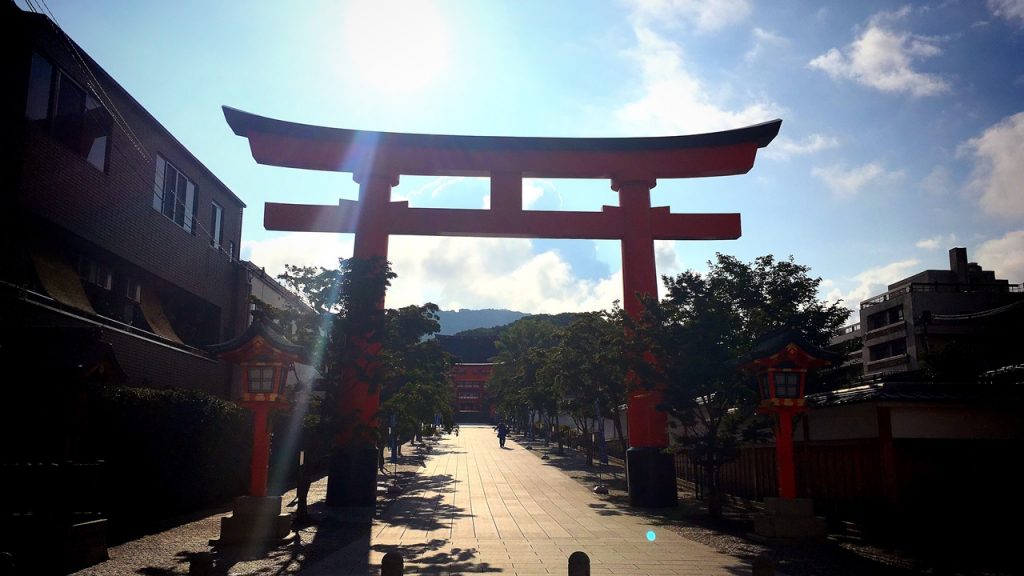 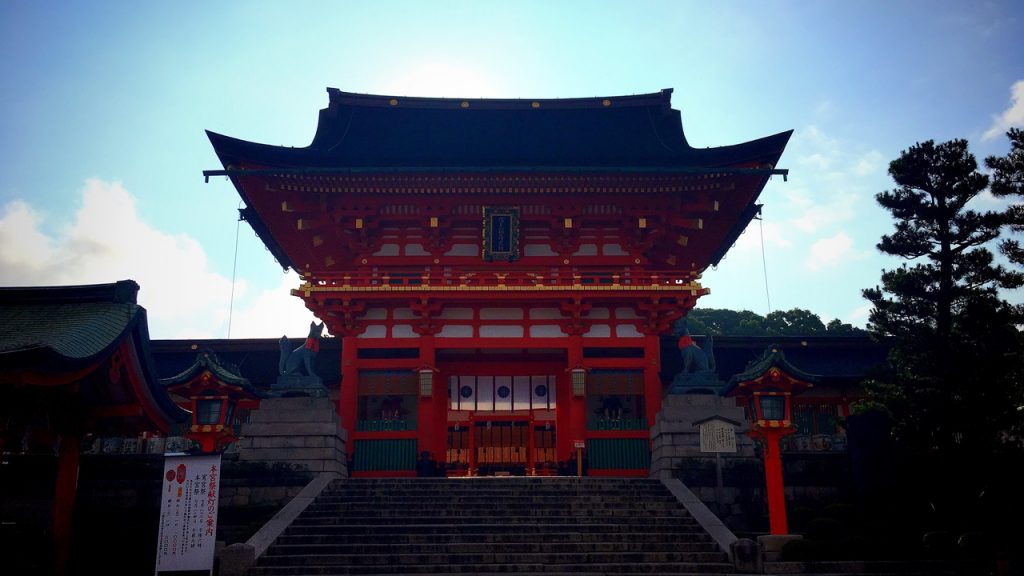 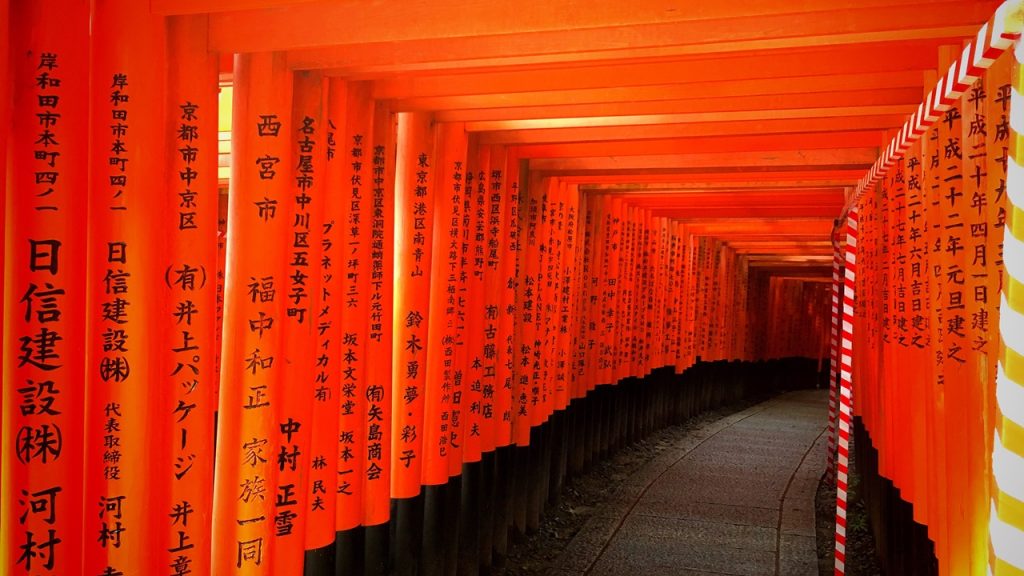 I went to Fushimi-Inari Taisha Shrine on the first train.

It was before 7:00 a.m. that I arrived at Fushimi-Inari Taisha Shrine.

There is nobody in front of a main shrine in this time. 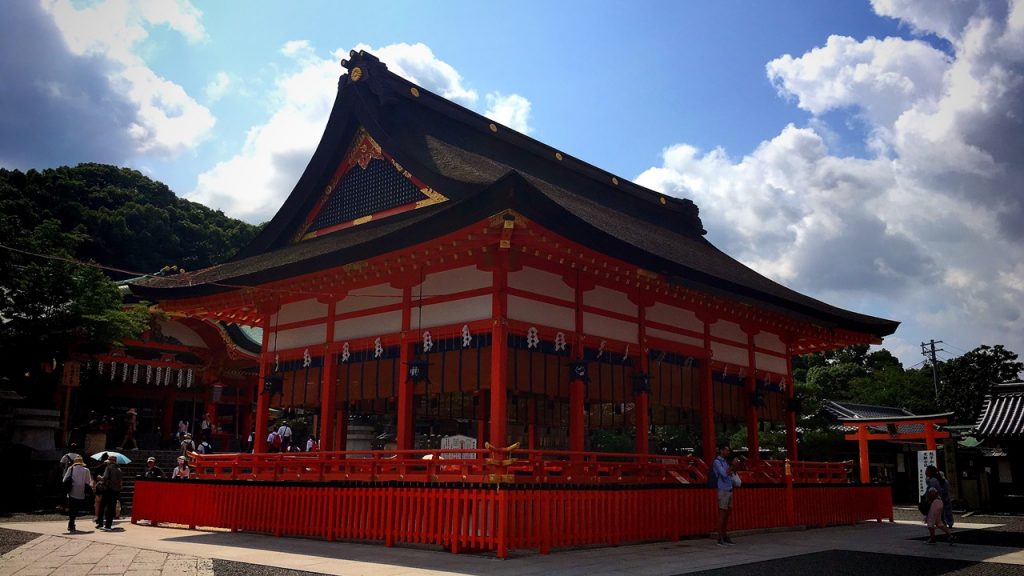 However, it is crowded with tourists when it is past 8:00 a.m.

Fushimi Inari Taisha (伏見稲荷大社) is the head shrine of Inari, located in Fushimi-ku, Kyoto, Japan. The shrine sits at the base of a mountain also named Inari which is 233 metres above sea level, and includes trails up the mountain to many smaller shrines which span 4 kilometers and takes approximately 2 hours to walk up.
Since early Japan, Inari was seen as the patron of business, and merchants and manufacturers have traditionally worshipped Inari. Each of the torii at Fushimi Inari Taisha is donated by a Japanese business. First and foremost, though, Inari is the god of rice.
This popular shrine is said to have as many as 32,000 sub-shrines (bunsha (分社)) throughout Japan.
引用(citation):https://en.wikipedia.org/wiki/Fushimi_Inari-taisha

Inari means God of the fox. Therefore a lot of guardian fox is installed in the precincts of this shrine.

If you look the guardian fox closely, it is enshrined with “Ear of rice” or “Scroll” or “玉(Holy ball)” or “鍵(Holy key)” in its mouth.

Japanese people say “玉屋(Tamaya)” or “鍵屋(Kagiya)” when they see fireworks, those were the names of the manufacturers of fireworks in the Edo period.

And the origin of the name of these fireworks shop is the Holy ball and the Holy key which a guardian fox has in its mouth. 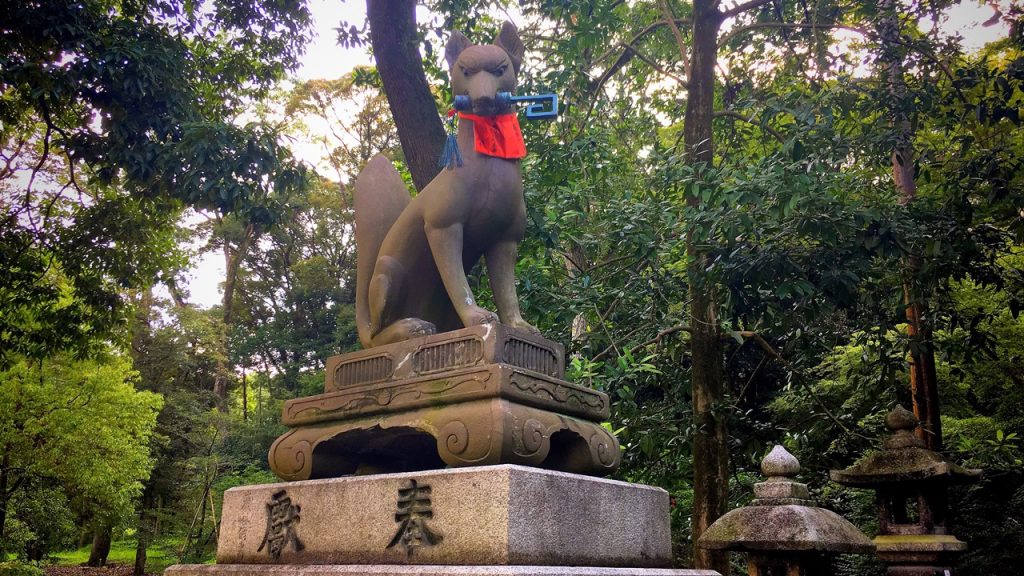 The guardian fox which has “Holy key” in its mouth. 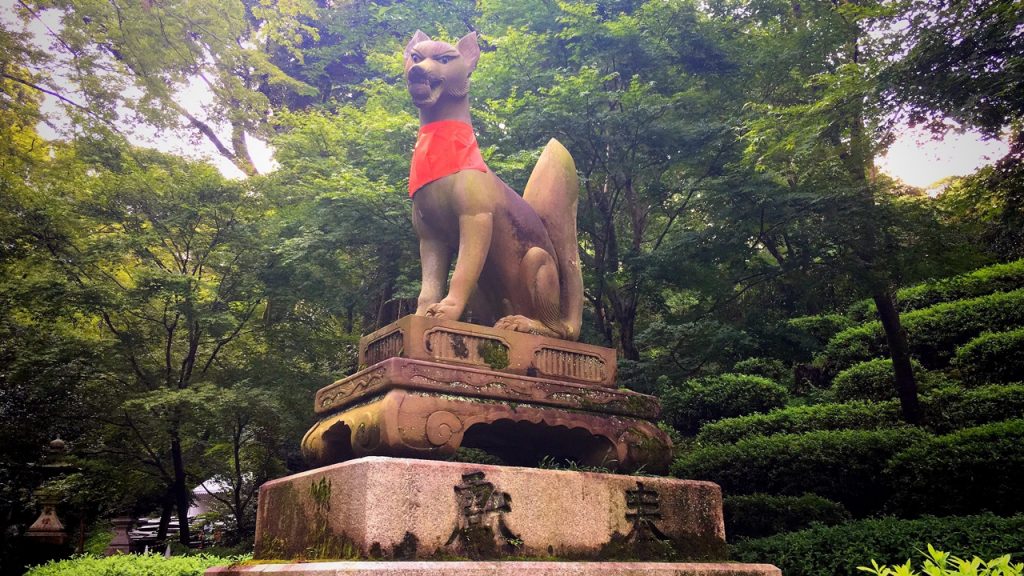 The guardian fox which has “Holy ball” in its mouth.

The tower gate of the entrance is appointed to important cultural property.

There is an 外拝殿(ge-haiden) ahead of the tower gate. 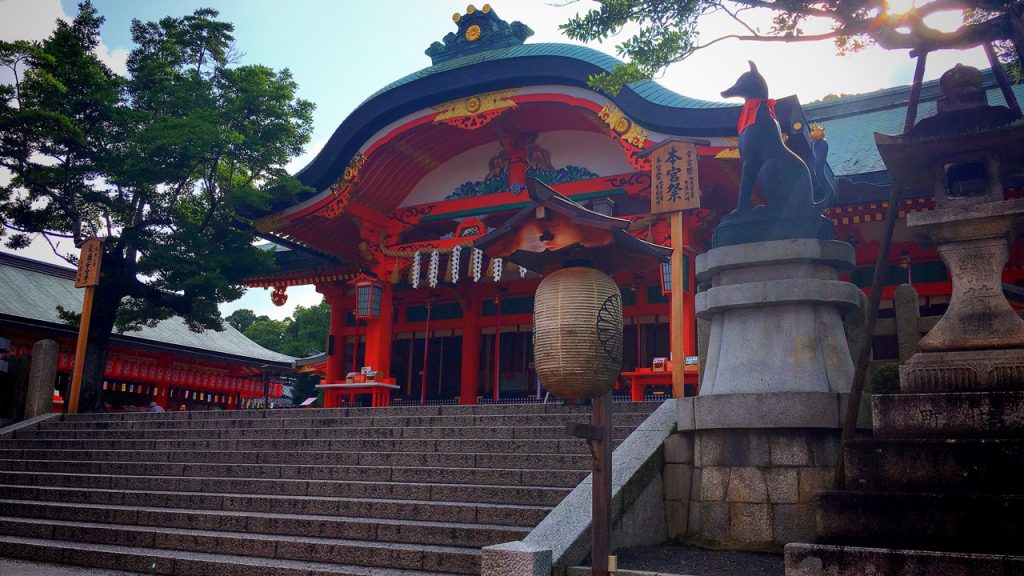 This is 内拝殿(nai-haiden). There is a main shrine at the rear of this building. 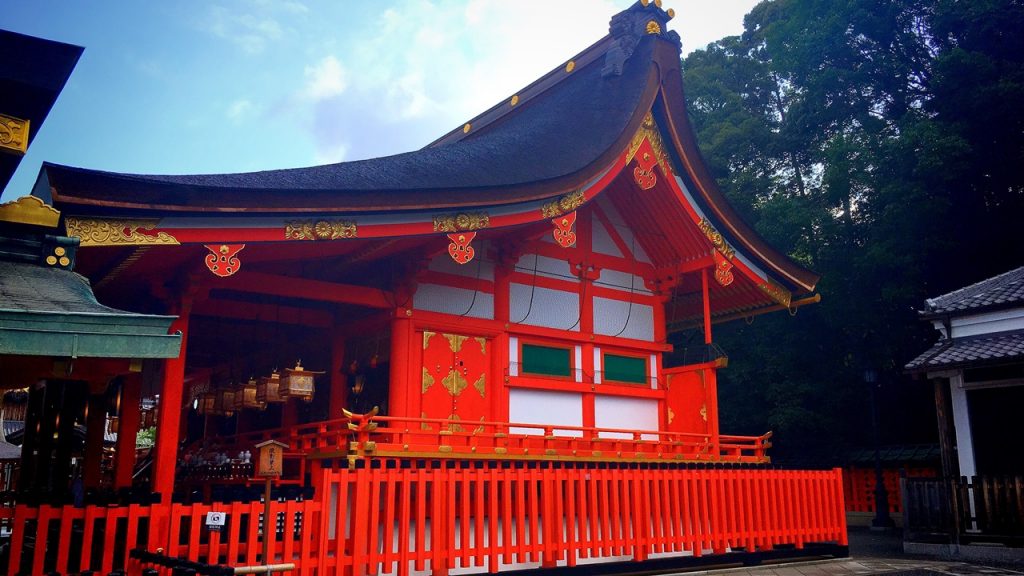 This is the main shrine of Fushimi-Inari Taisha Shrine.

Because this building was destroyed by Onin War, it was rebuilt in 1499 and has been appointed to important cultural property. 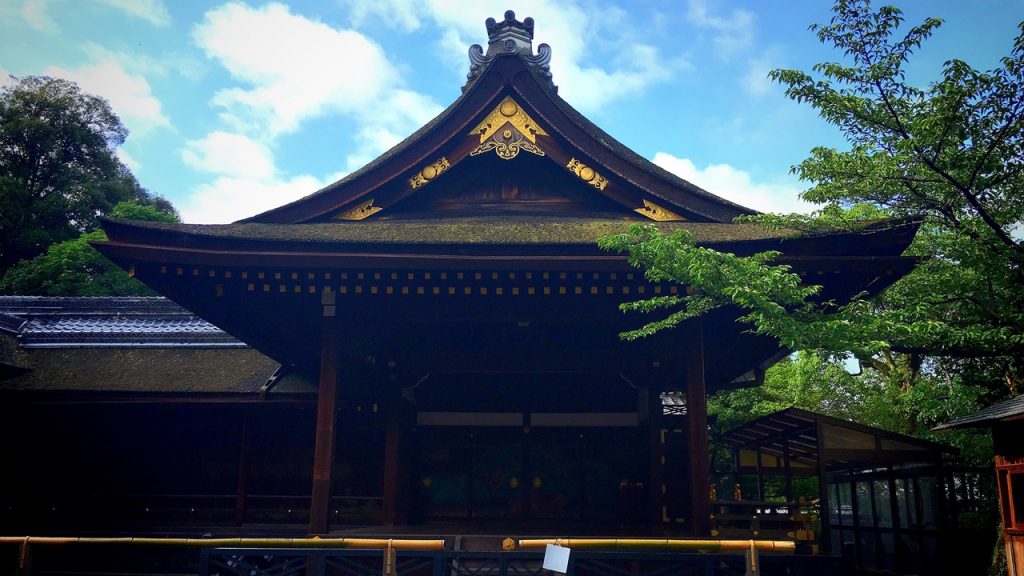 Kagura hall which has been built beside a main shrine. 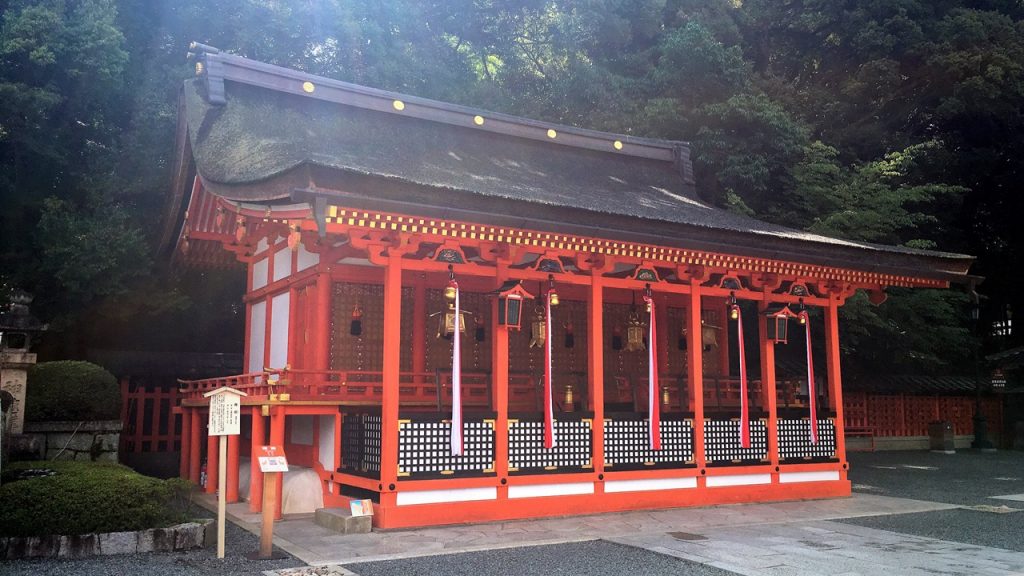 This is the 権殿(provisional shrine). It is appointed to important cultural property. 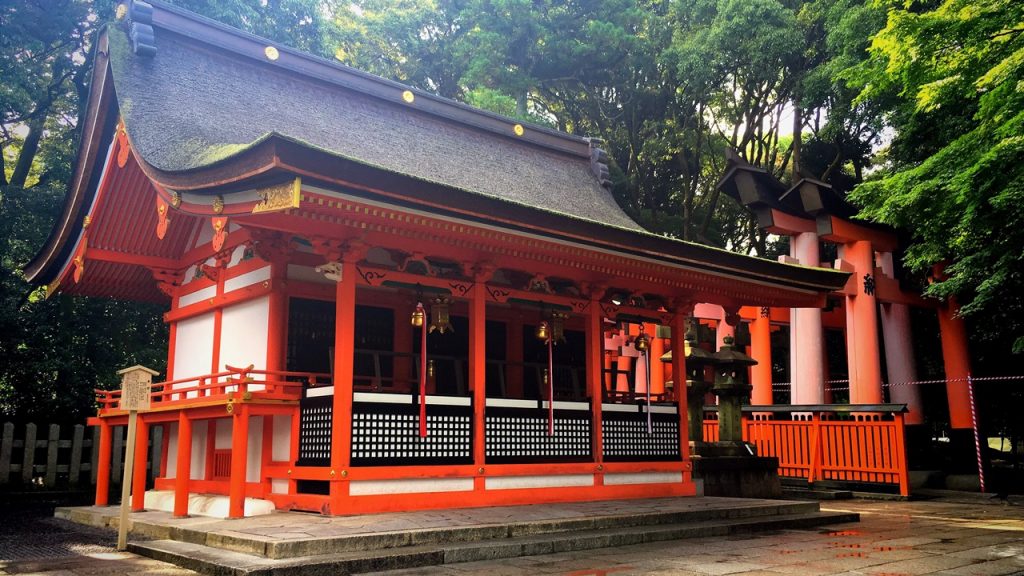 The road of 1000 torii gates begins with the torii built beside Okumiya (rear shrine). 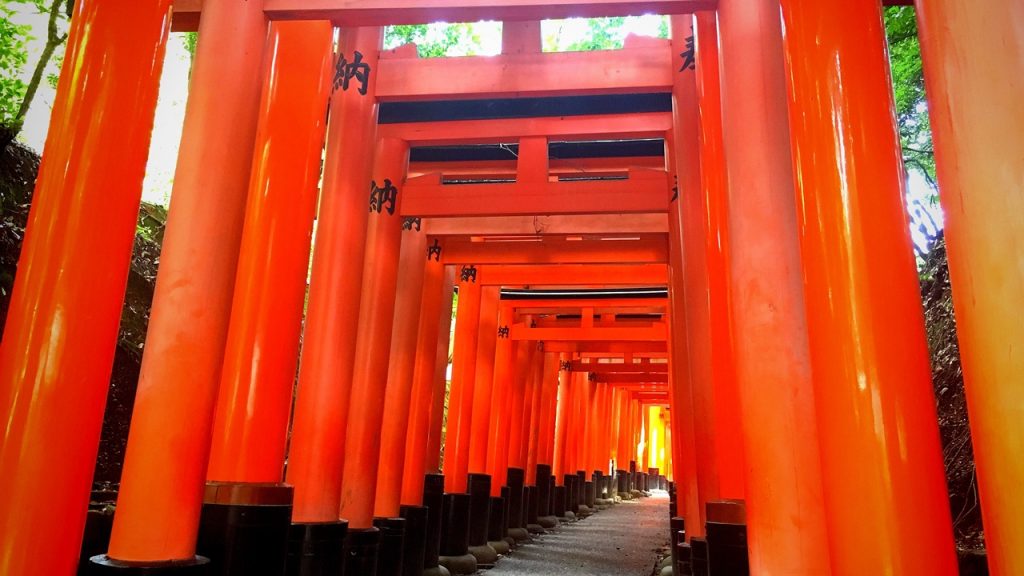 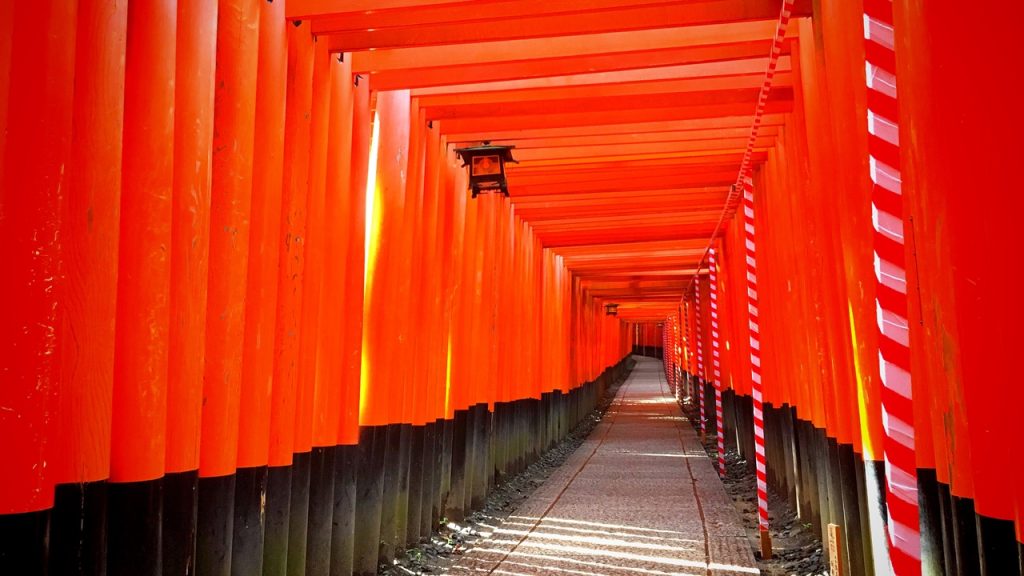 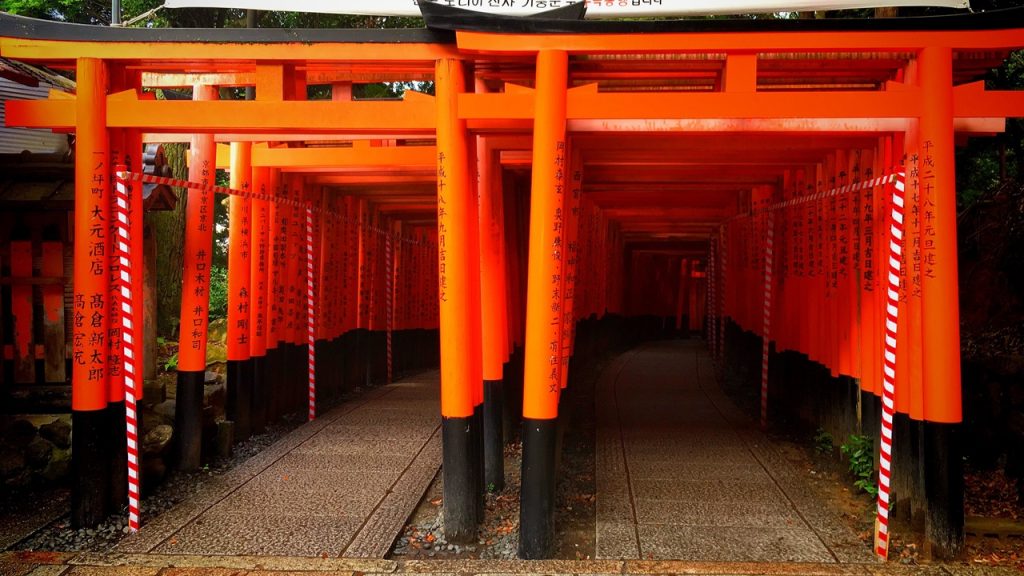 The common tourist returns at the end of these 1000 torii gates.

However, the road of the torii leads to the top of the mountain from here.

If you have time to spare, why do not you try to go to Inariyama?

Is it me ? Of course I climbed it. 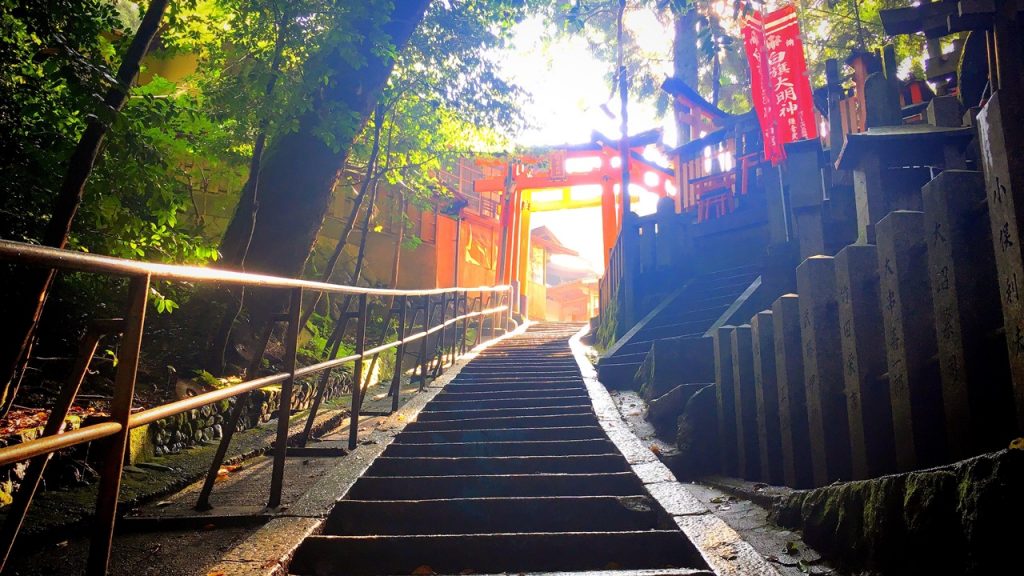 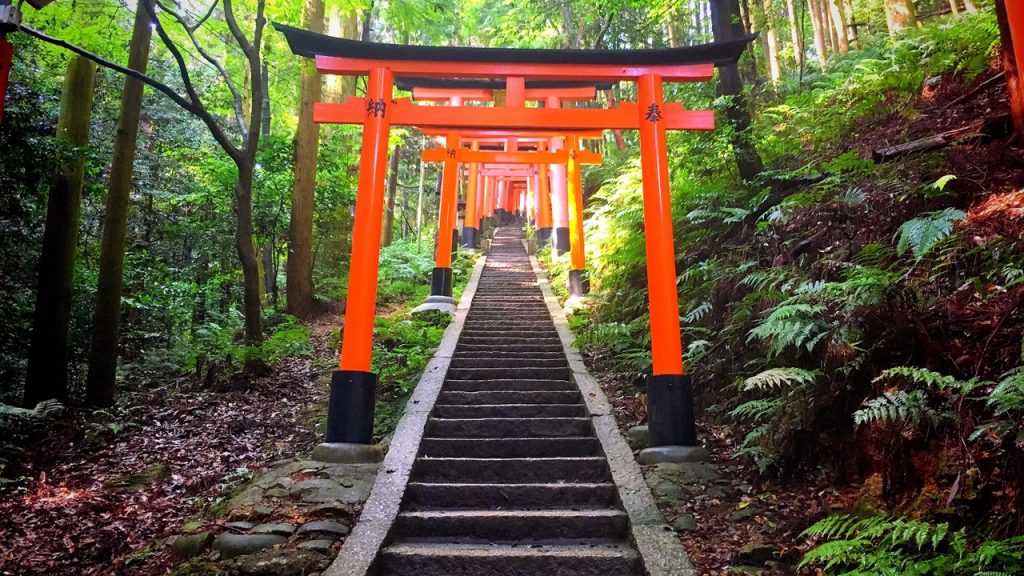 The trail road has many stairs. 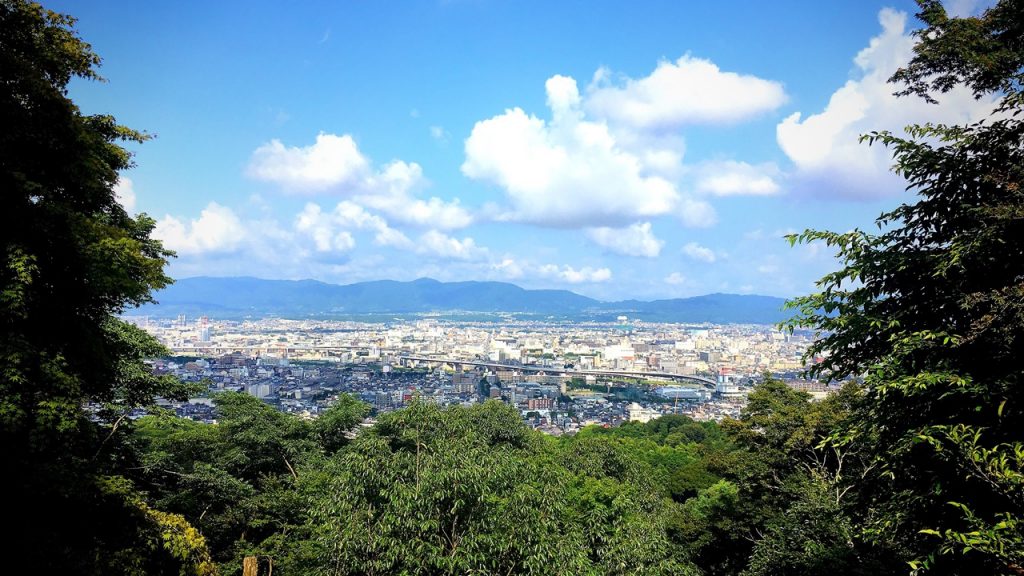 The view from the place called 四つ辻(Yotsutsuji). 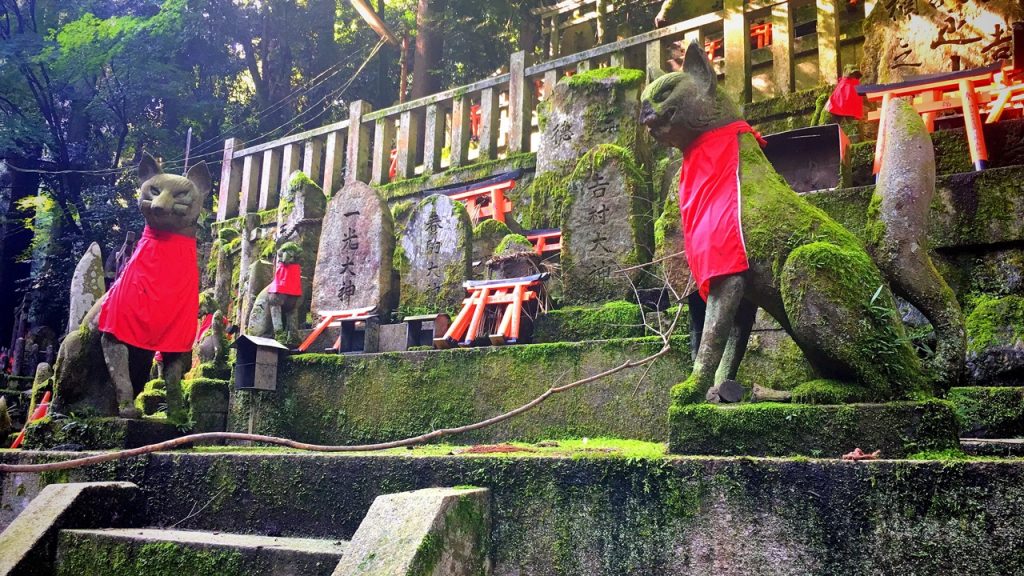 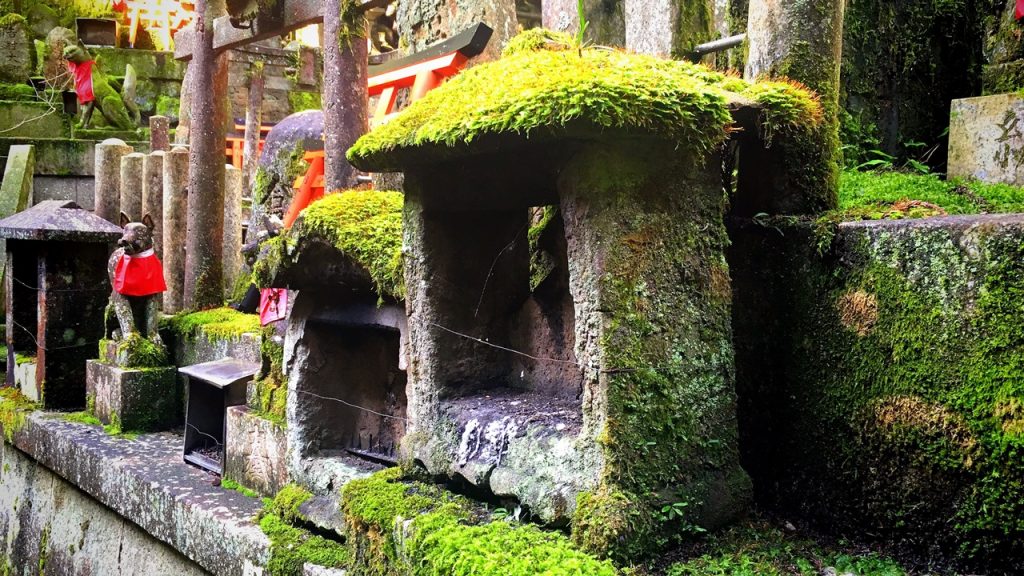 The small shrine and guardian fox which there is in the mountain trail are solemn atmospheres. 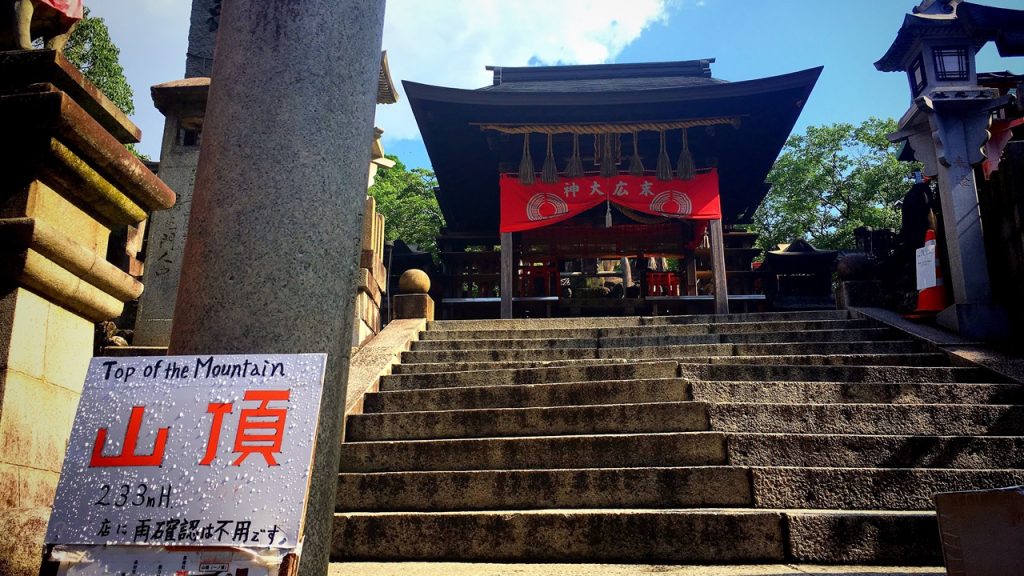 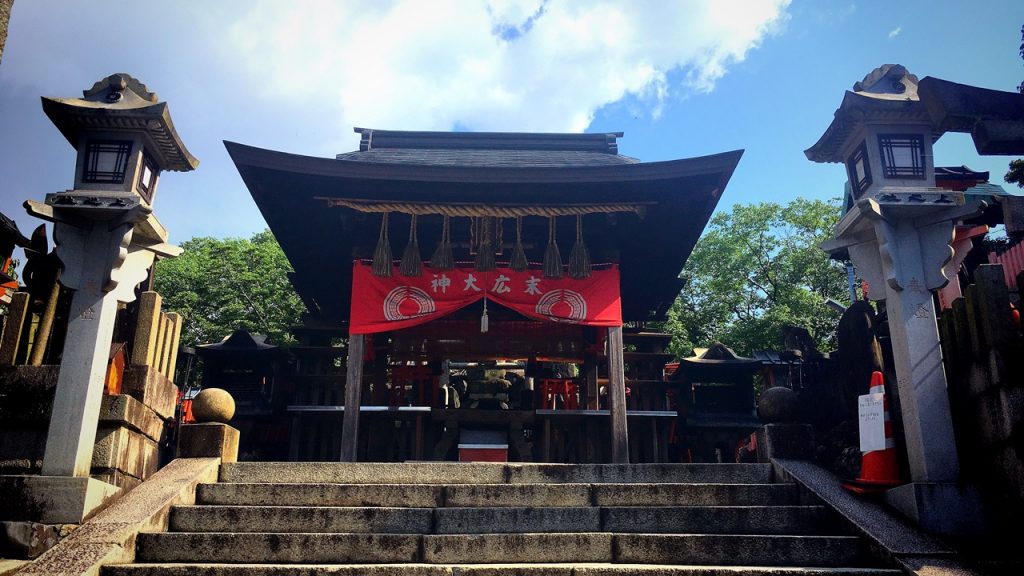 There is a small shrine called 上之社(Kami-no-Yashiro) on the mountaintop. There are a lot of such small Shinto shrines on the trail road. 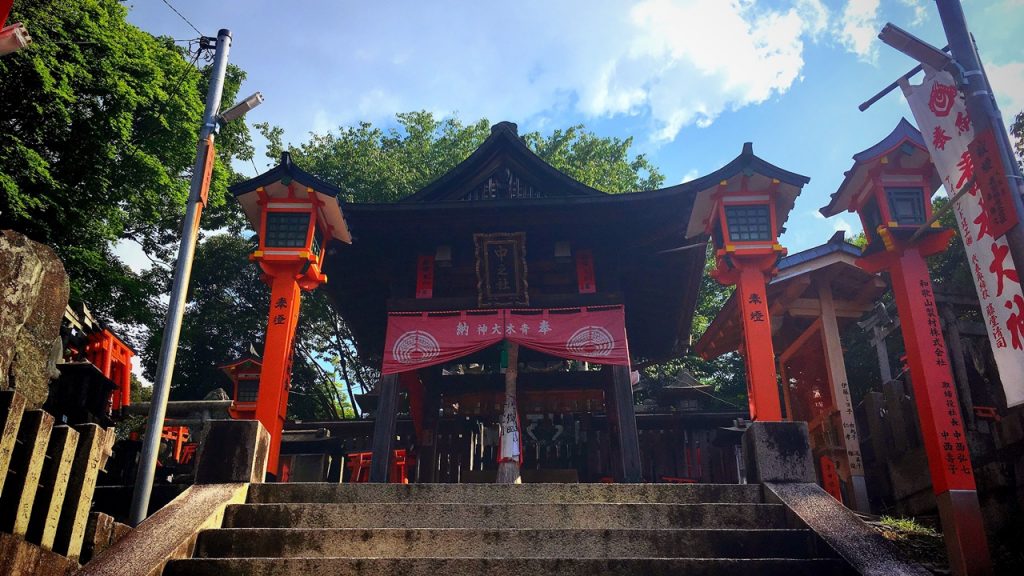 There is a small shrine called 中之社(Naka-no-Yashiro). 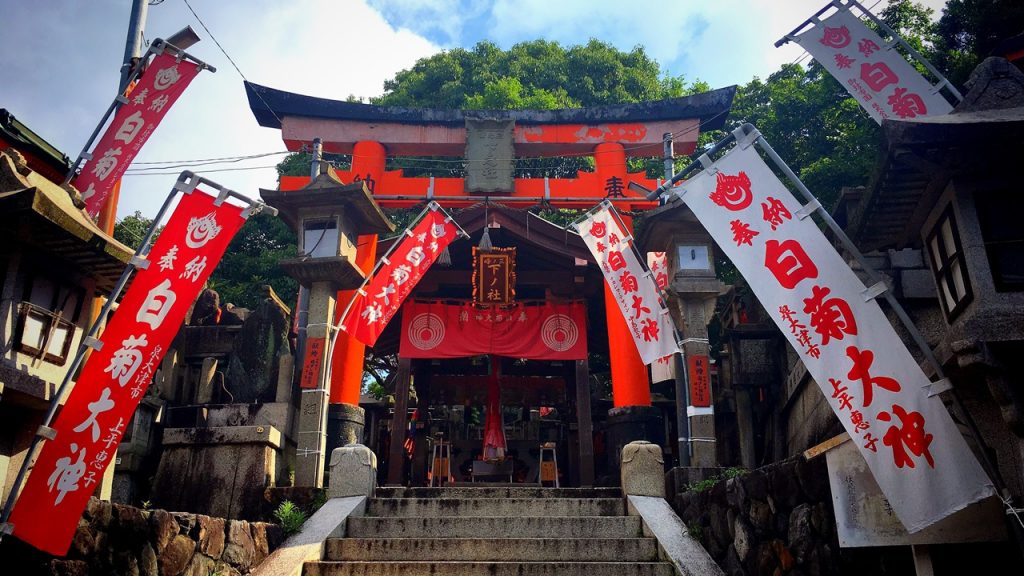 There is a small shrine called 下之社(Shimo-no-Yashiro).

If you have time to spare, why do not you try to go to Inariyama? 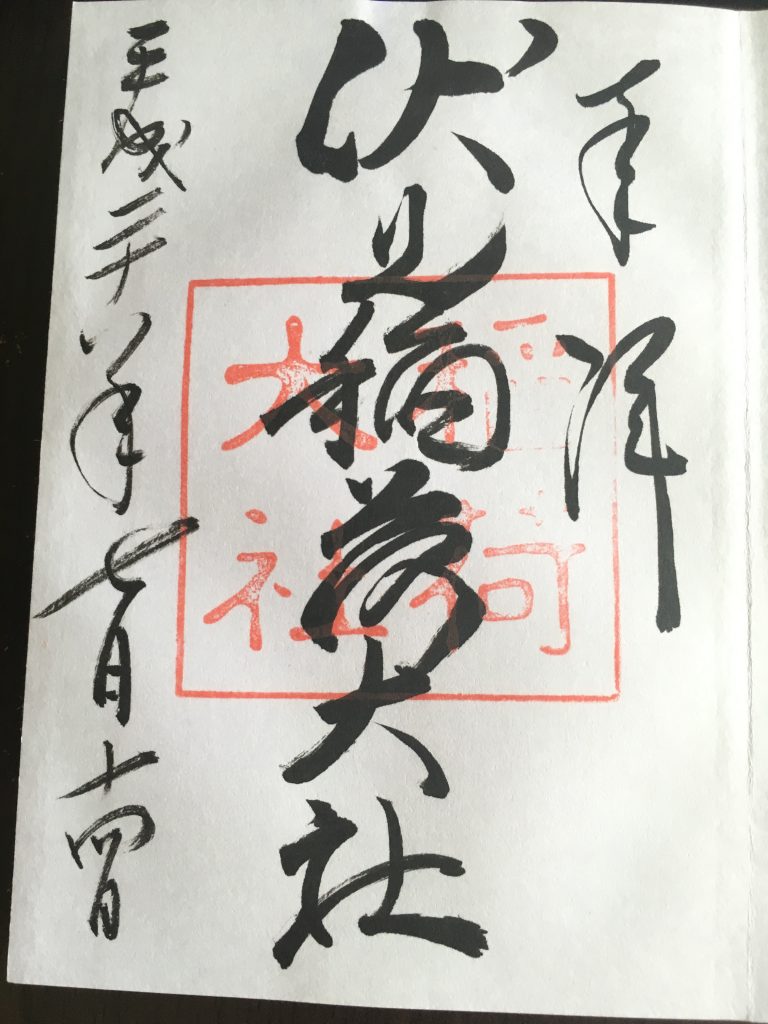 How to get to the Fushimi-Inari Taisha

From Osaka Sta. (by train)

1.Get on the JR Osaka Loop Line from Osaka Station to Kyobashi Station and change to the Keihan Railway.

2.Get on the Keihan Railway from Kyobashi Station to Fushimi-Inari Station.

From Namba Sta. (by train)

1.Get on the Osaka Metro Midosuji Line from Namba Station to Yodoyabashi Station and change to the Keihan Railway.

2.Get on the Keihan Railway from Yodoyabashi Station to Fushimi-Inari Station.

From Kyoto Sta. (by train)

1.Get on the JR Nara Line from Kyoto Station to Inari Station. 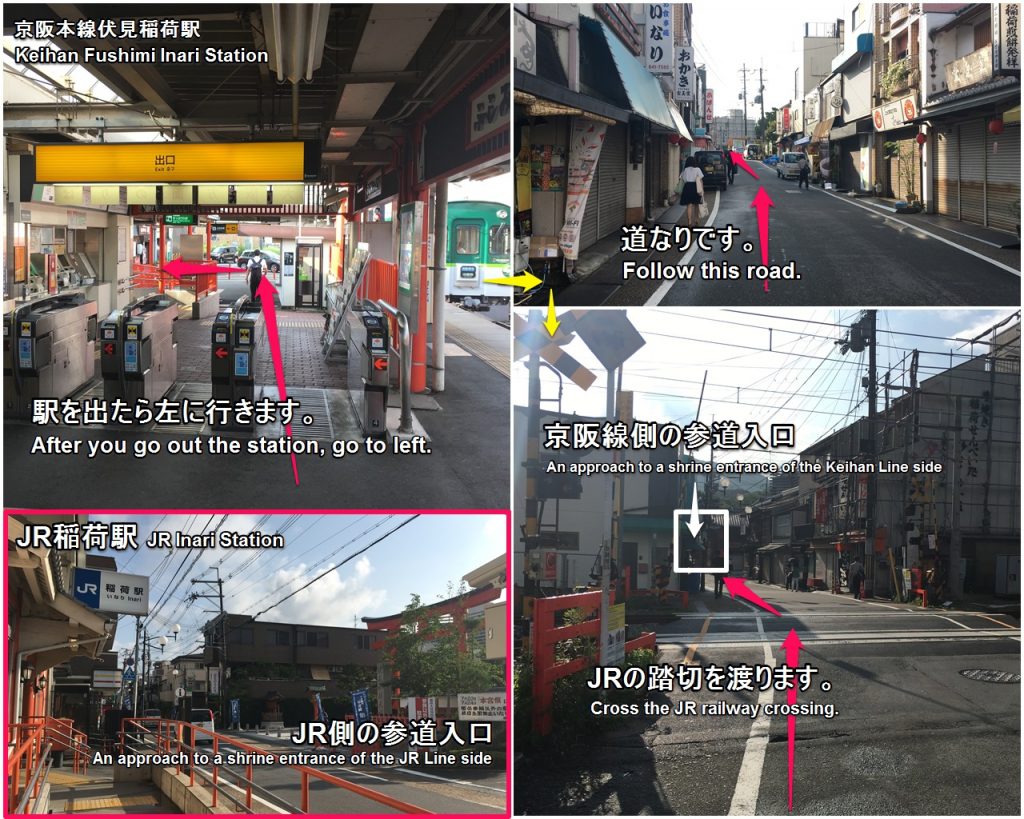 Phone number of taxi company (around the Kyoto Station) *Japanese text only.