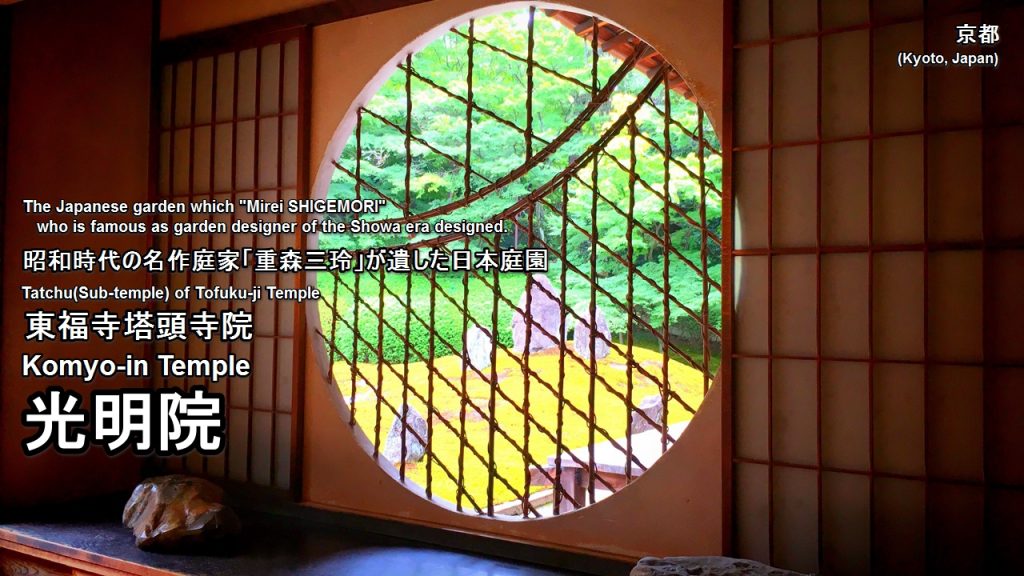 This temple was founded by Kinzan Myosho in 1391.
(He was a Buddhist priest of the Rinzai sect of the Muromachi era and was a 70th chief priest of Tofuku-ji Temple.)

The best highlight of this temple is a Japanese garden with dry landscape.

This Japanese garden is called “Hashintei“.

The gardens Mirei SHIGEMORI performedlandscape architecture on was the Karesansui Garden (dry landscape garden) with strong stone foundation and modern-style allotment of land by moss, and his representative works include the Garden of the Hojo (Hall of an Abbot) in Tofuku-ji Temple, the garden of Zuiho-in Temple within the grounds of Daitoku-ji Temple, and the garden of the Matsuo-taisha Shrine.

Because we can watch various scenery every four seasons, this temple is also called the “moss temple of the rainbow“.

Komyo-in Temple is a temple of the Rinzai sect of Tofuku-ji Temple group.
Marishiten (Goddess of Wealth and Warrior Class) is enshrined in this temple. 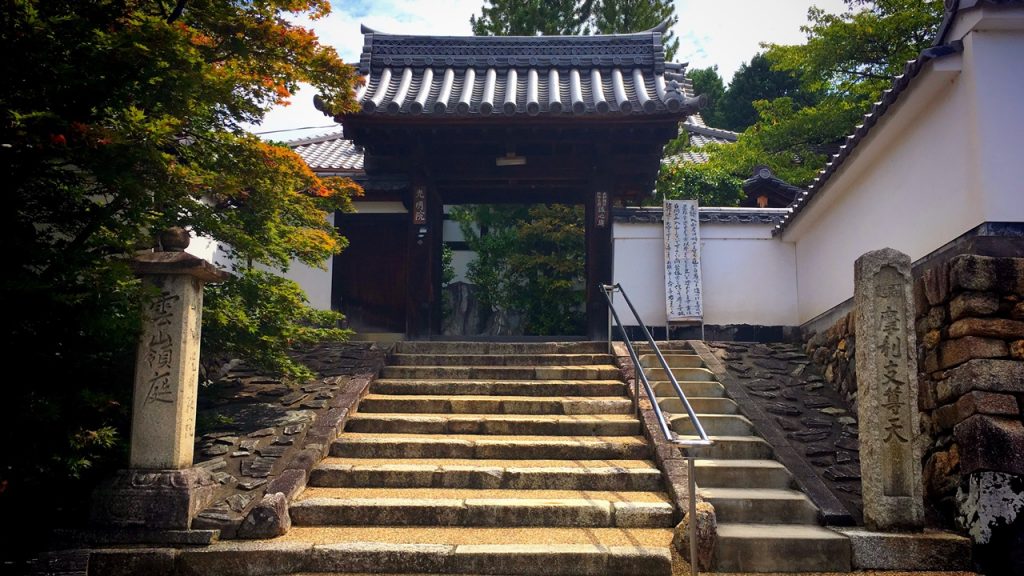 Because of the Haibutsu-kishaku (a movement to abolish Buddhism) in the early Meiji era, this temple was abandoned.
However, it was revived in the late Meiji era (1911).
(Thus, a building and a Japanese garden of this temple were built in the Showa era.) 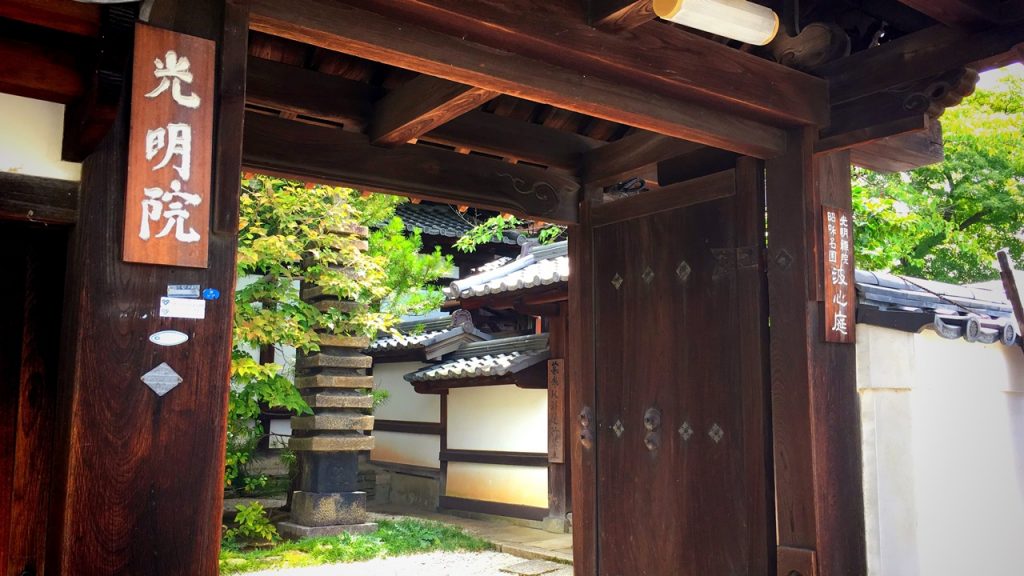 An admission fee of this temple is a small money of your gratitude.
You decide an admission fee by yourself and put the money into the bamboo tube of the entrance.
This system is called “Shino(志納)“. (A standard fee is 300 yen.) 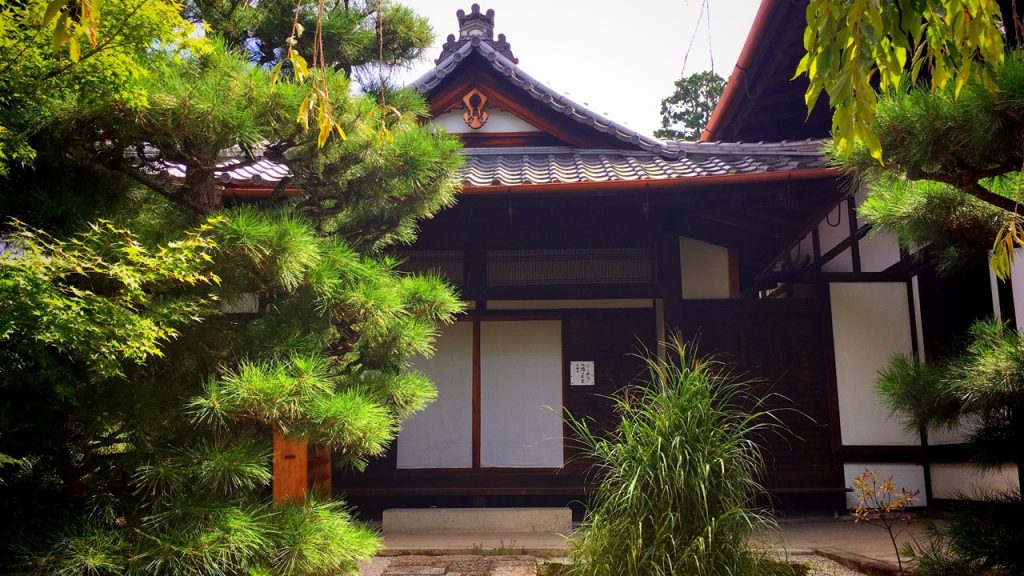 We enter the precincts of the temple from the tea-ceremony room called “Kantei-ro(観庭楼)“. 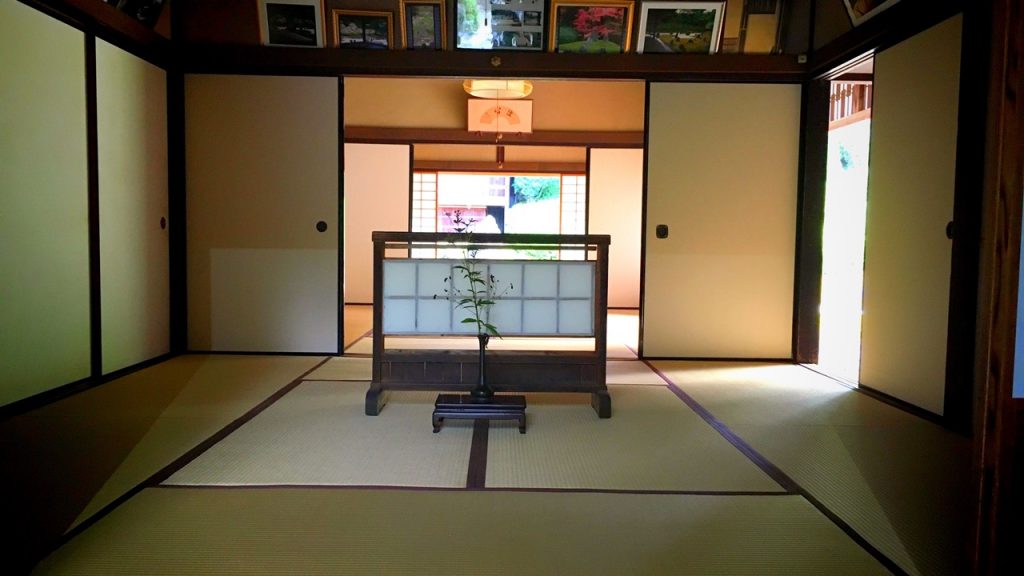 A garden spreading out before the tea-ceremony room and the Hojo (Abbot’s Quarters) is “Hashintei(波心庭)“.
It is a beautiful garden which was created by Mirei SHIGEMORI who was a  famous Japanese gardener during the Showa period. 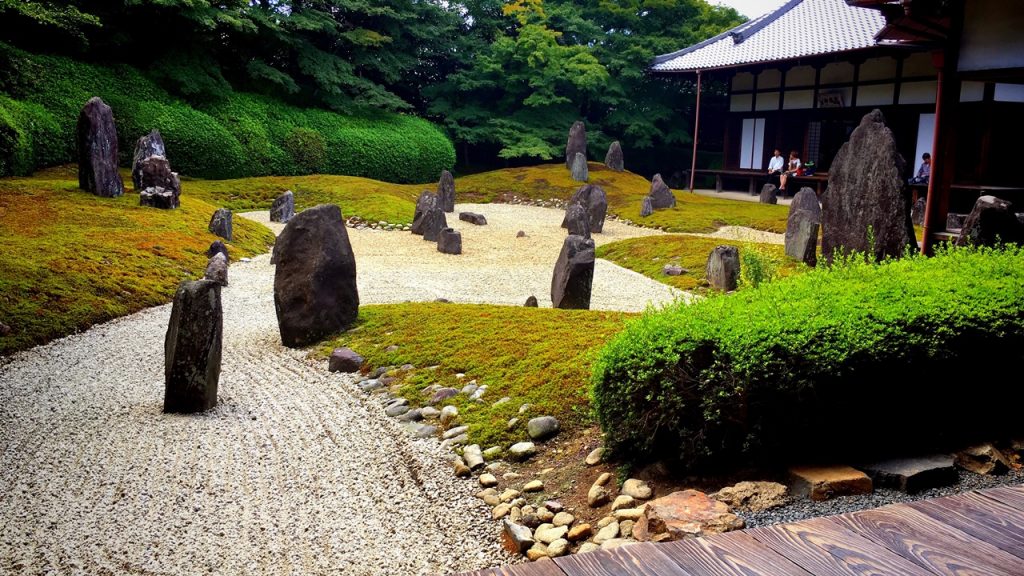 The great pruning of a azalea which is behind a garden expresses a “cloud“, and the white sand expresses the “big ocean“.
“Hashin(波心)” which is the name of this garden is derived from a following sentence of the Zen.
“雲ハ嶺上ニ生ズルコトナク、月ハ波心ニ落ツルコト有リ”
(Kumo ha reijo ni shozurukoto naku tuki ha hashin ni otsurukoto ari)
The meanings of this sentence are as follows.
“If you throw away the cloud named worldly desires, the moon which is called the Great compassion is reflected in the waves.” 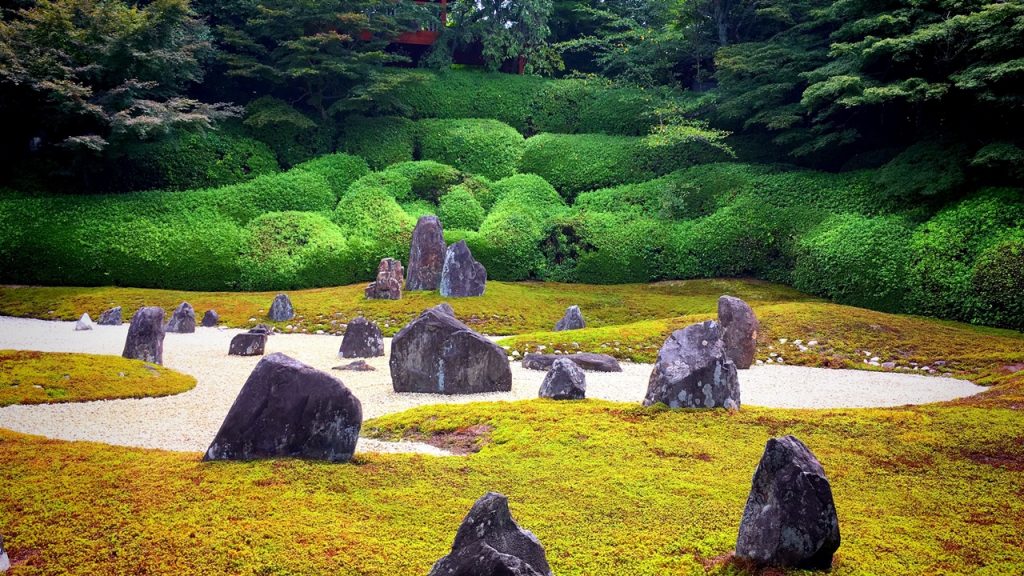 A pattern of the white sand express the big ocean well. d(*ﾟーﾟ*)
75 stones are placed in this garden.
This stones express the condition which the light emitted radially. 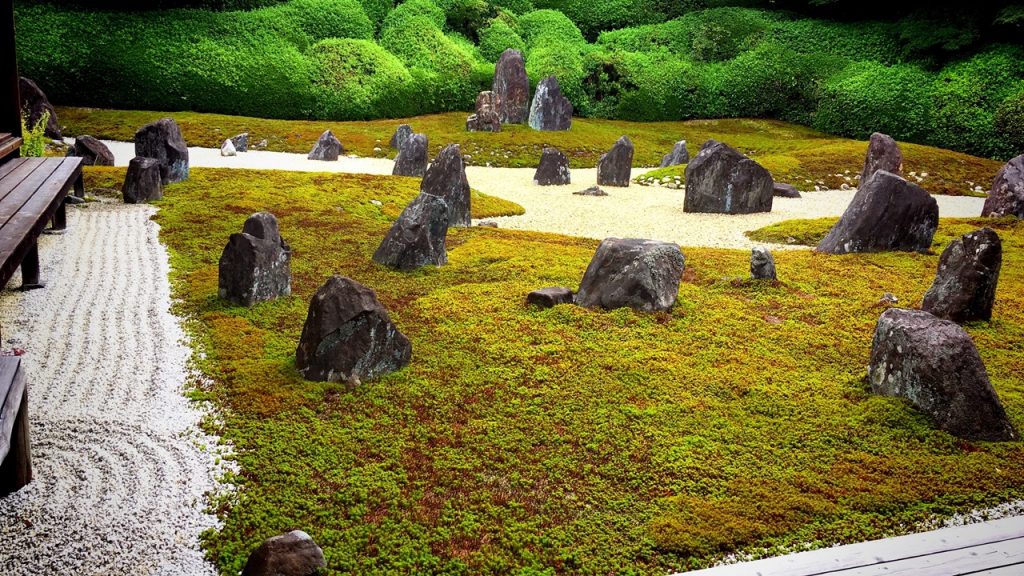 Three big stones in the depths of the garden are called “Sanzoniwagumi(三尊石組)“.
These three stones express the three stone Buddha statue triads known as the Shaka Triad, Yakushi triad and Amida triad. 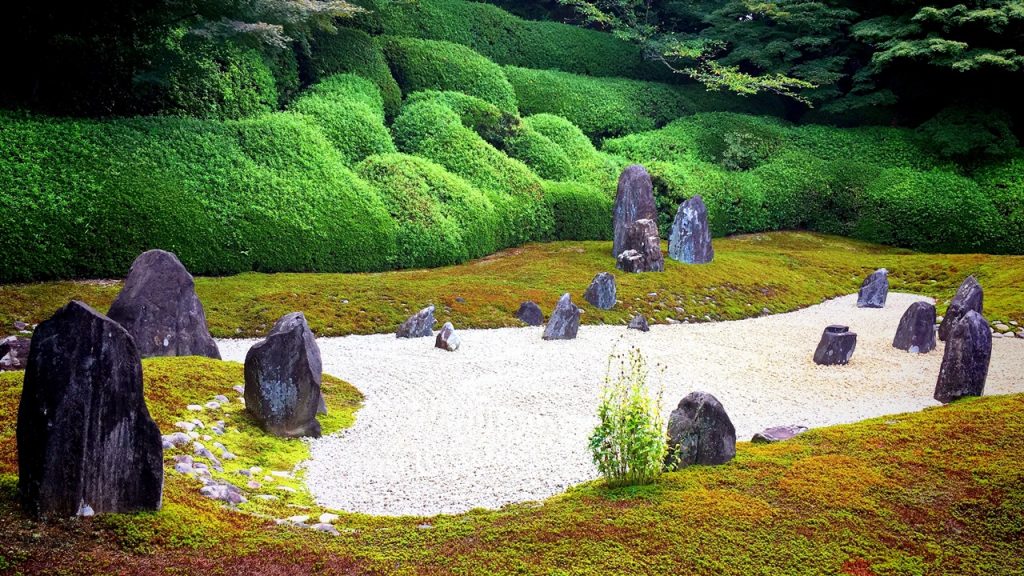 This is the Hojo (Abbot’s Quarters). 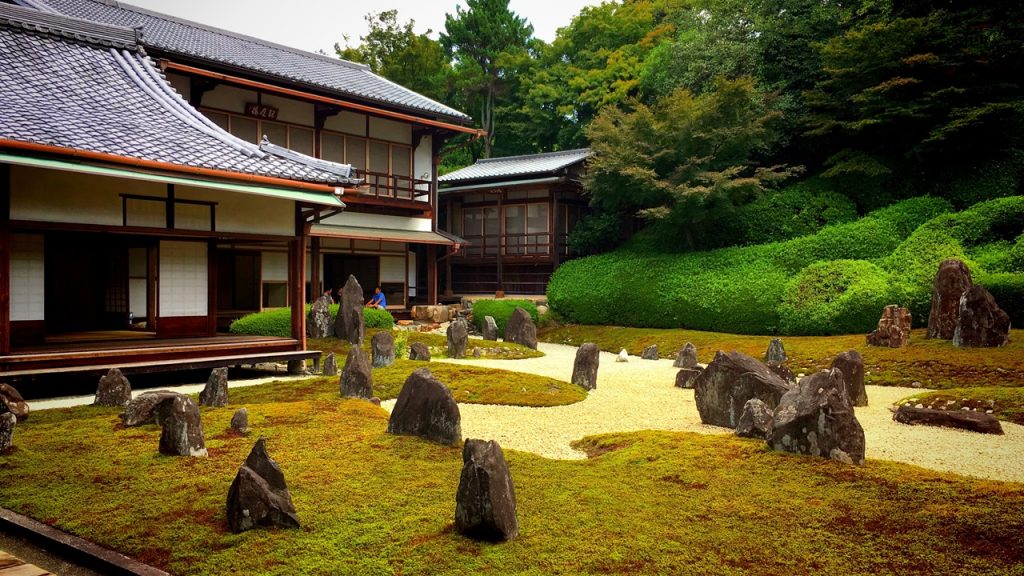 The scenery of the garden to look at from the Yoshino window of the tea-ceremony room. 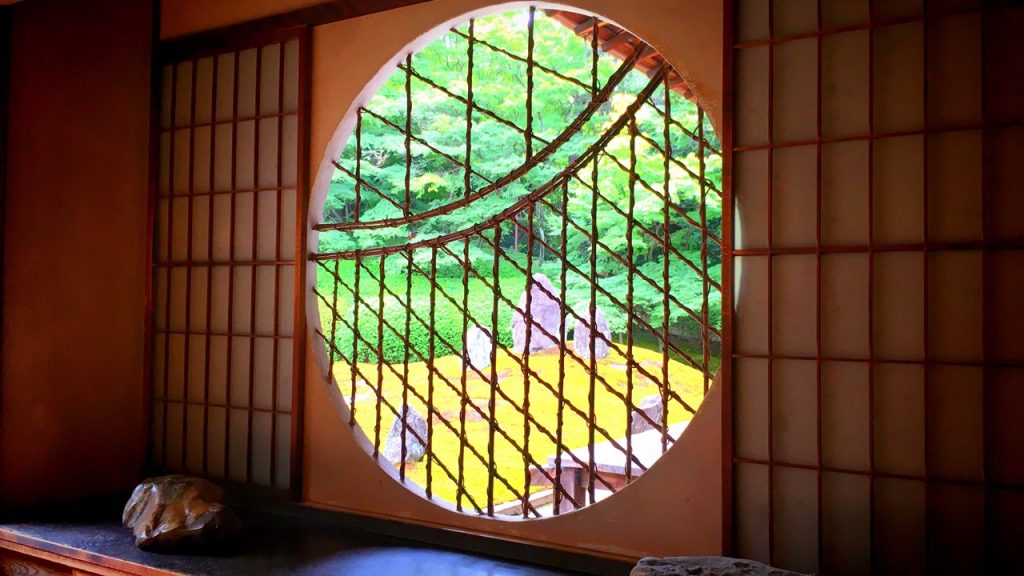 The scenery of the garden to look at from the room. Beautiful!! d(*ﾟーﾟ*) 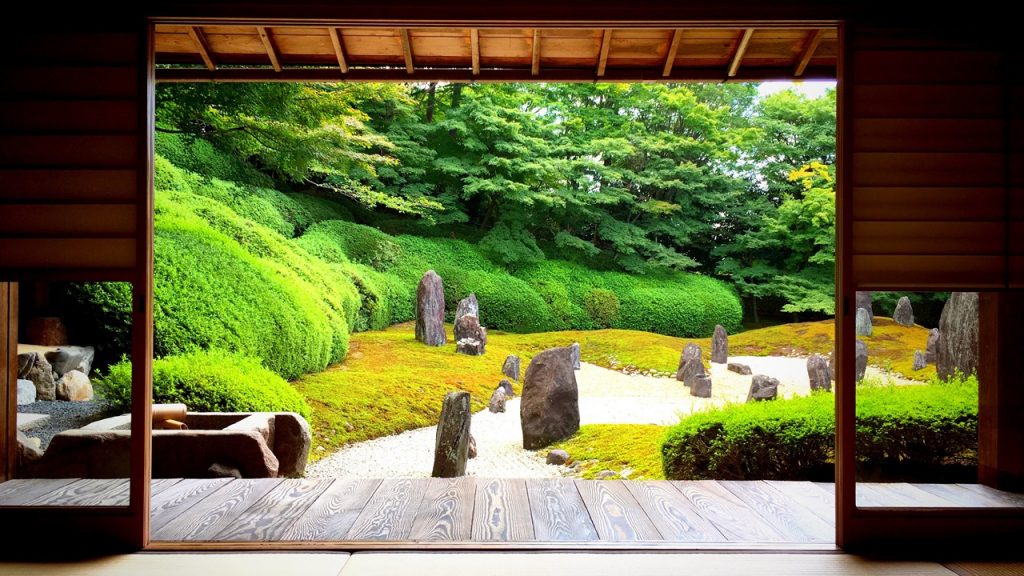 This temple does not have “Goshuin(The stamp of shrine or temple)”.

4.How to get to Komyo-in Temple

The nearest station of Komyo-in Temple is “Keihan Tobakaido station”.
It is about 10-minutes walk from the station. 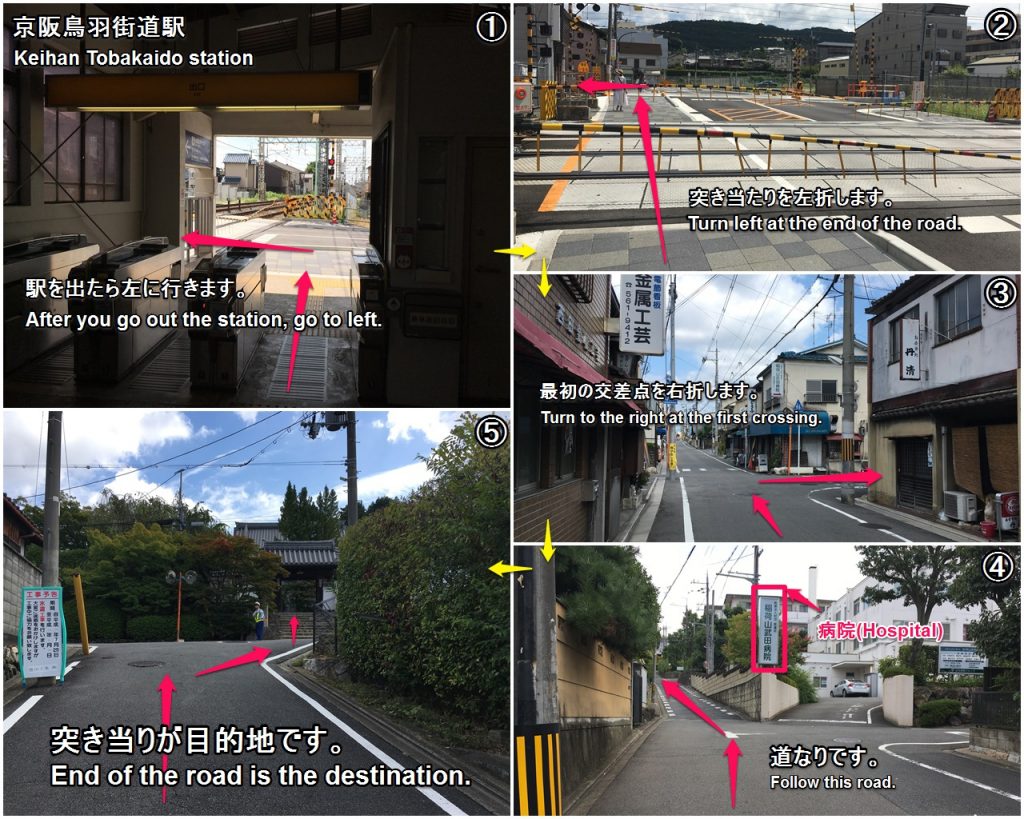