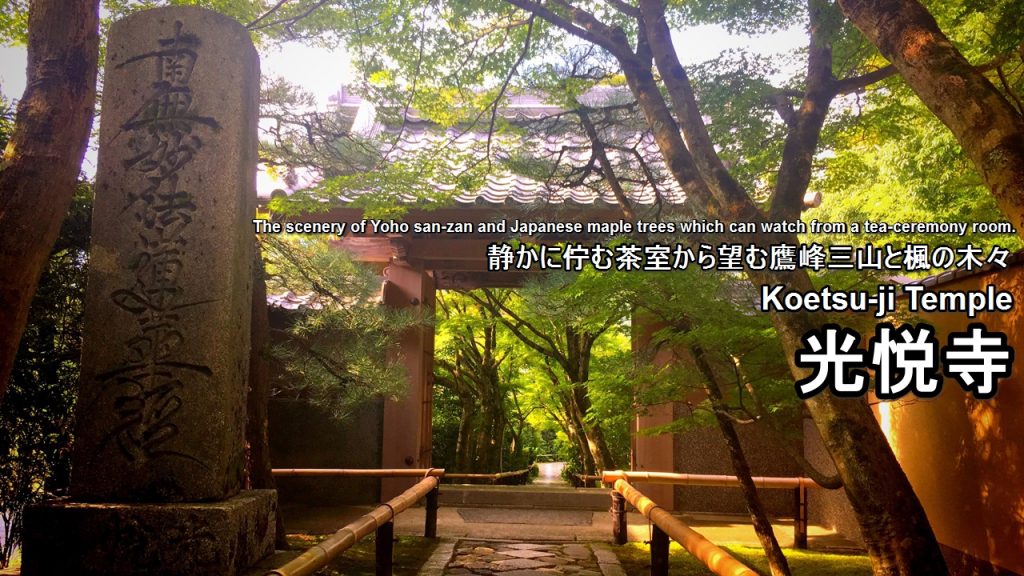 Koetsu-ji Temple is a Buddhist temple belonging to the Nichiren Sect located in Takagamine, Kita Ward, Kyoto City.
The establishment as the temple is said to be 1656.

The Edo period artist Koetsu Honami(本阿弥 光悦) was granted the site by Ieyasu Tokigawa(徳川 家康) in 1615.
And, he moved into this area along with followers of the Hokke sect (Nichiren sect), including the Honami family, townspeople and craftsmen.

After Koetsu’s death, his residence became a temple for the Nichiren sect called the Koetsu-ji Temple.

This is the temple worthy of the temple of artist, and there are seven tea-ceremony rooms in this temple.

In this temple, a lot of the maple-leaves turn red in autumn.
Therefore this temple is also a noted place of famous colored leaves of North Kyoto.

In addition, there are a temple such as Genko-an Temple which is famous for the blood ceiling and Josho-ji Temple in the neighborhood of this temple.

The temple that conveys the heart of tea ceremony was named after Koetsu, a multi-artist
The temple was named after Honami Koetsu, famous calligrapher, ceramic artist and master of tea ceremony in the early Edo period. Many of the tea cups, calligraphies, paintings and other works of art created by him are Important Cultural Properties of Japan. He lived and built a building to console the souls of ancestors on the land received from Tokugawa Ieyasu (one of the three great military commanders during the Warring States period of Japan.) Later he developed an art community inviting his relatives and an array of craftsmen. Around 1656 after his death, the place was made a temple.
引用(citation):https://www.jnto.go.jp/eng/spot/shritemp/koetsujishrine.html

In this temple, four days of November 10~13 are regular holidays every year.
When you want to go to watch colored leaves, let’s be careful.

There is a entrance in the corner of the residential area.
Koetsu-ji Temple is a temple of the Nichiren Sect, and their main religion is Hoke-kyo Sutra (the Lotus Sutra).
The official name of Koetsu-ji Temple is “Taikyozan Koetsuji(大虚山 光悦寺)”. 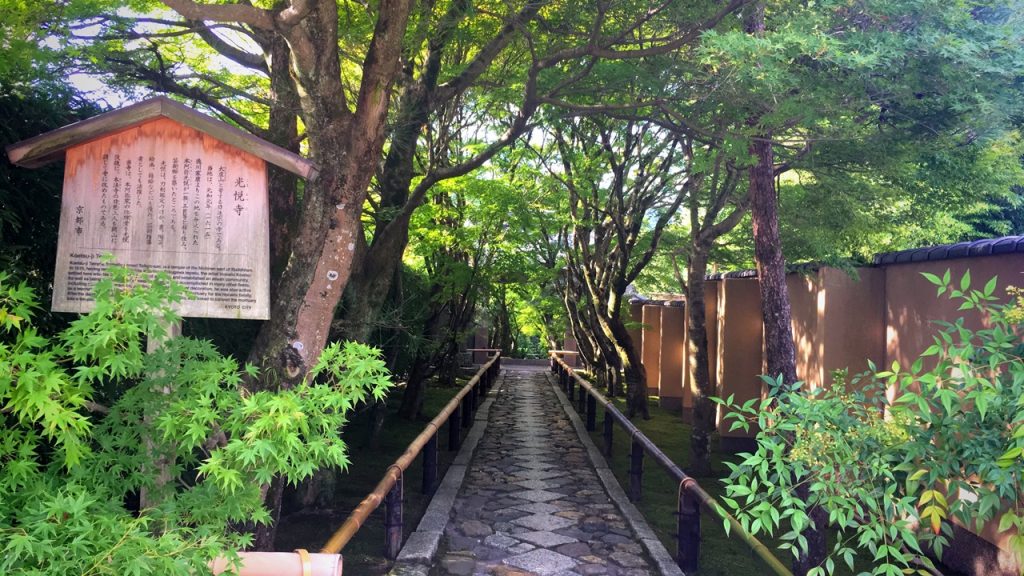 It comes from that the Sango (Mountain Name) of the Koetsu-ji Temple is “Taikyozan(大虚山)”.
In front of the main gate of a Buddhist temple, there is the monument where the words of “Nam-myoho-renge-kyo(南無妙法蓮華経)” that is the correct practices of the Lotus Sutra were engraved.
The seven kanji characters “南無妙法蓮華経” as a whole mean “I devote myself (embrace) to the teachings of the Lotus Sutra.” 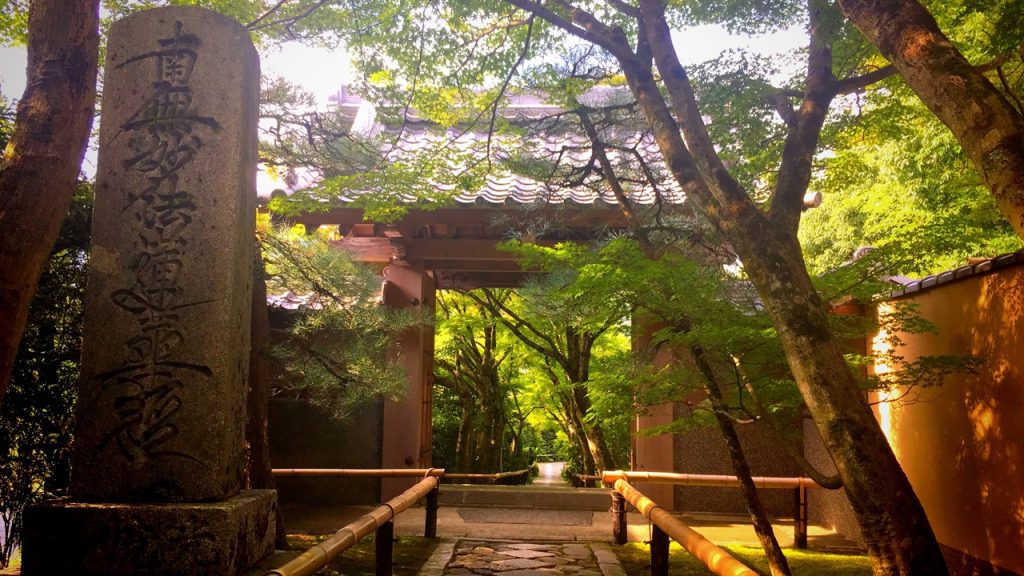 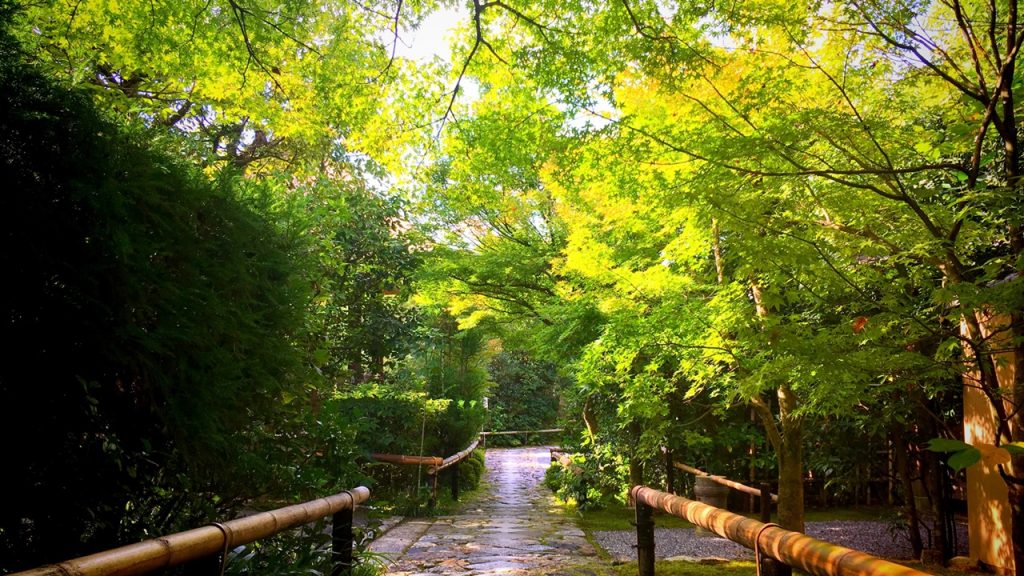 We can watch autumn leaves(紅葉) in the autumn.
This time is the best recommended season of this temple. d(*ﾟーﾟ*) 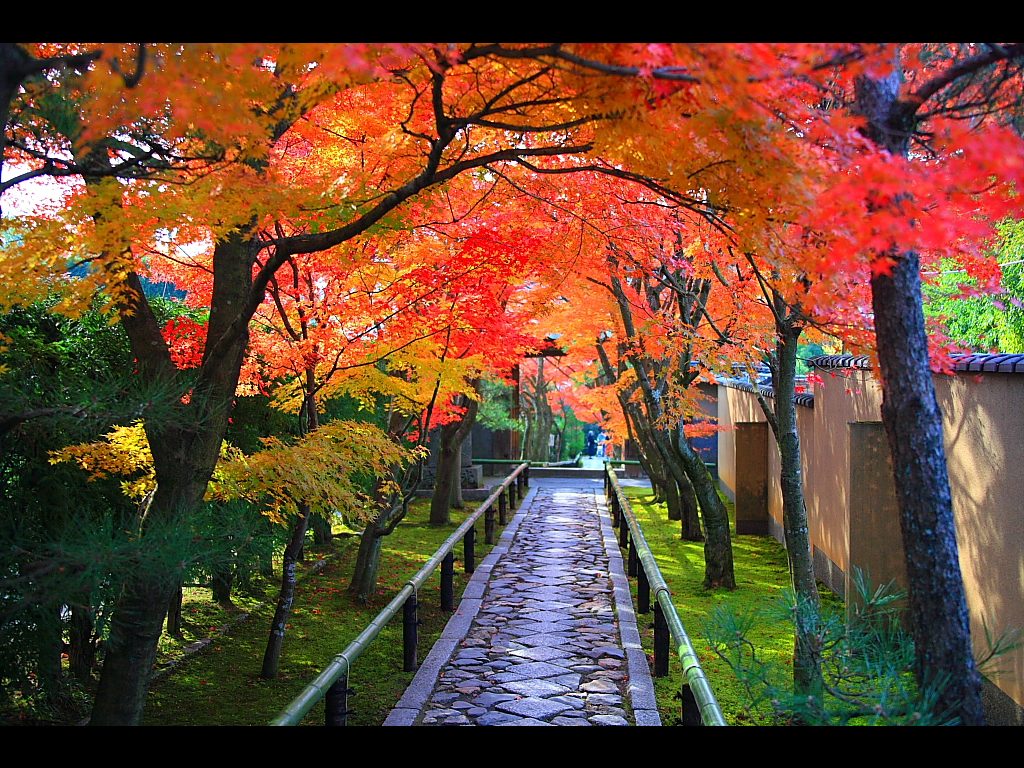 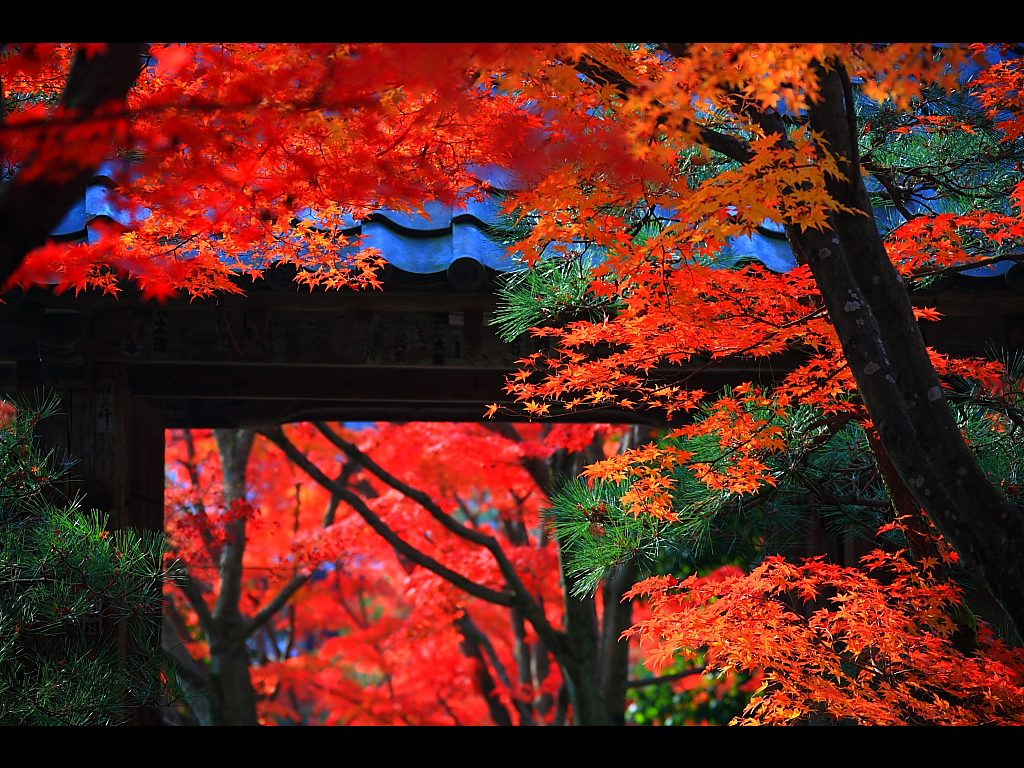 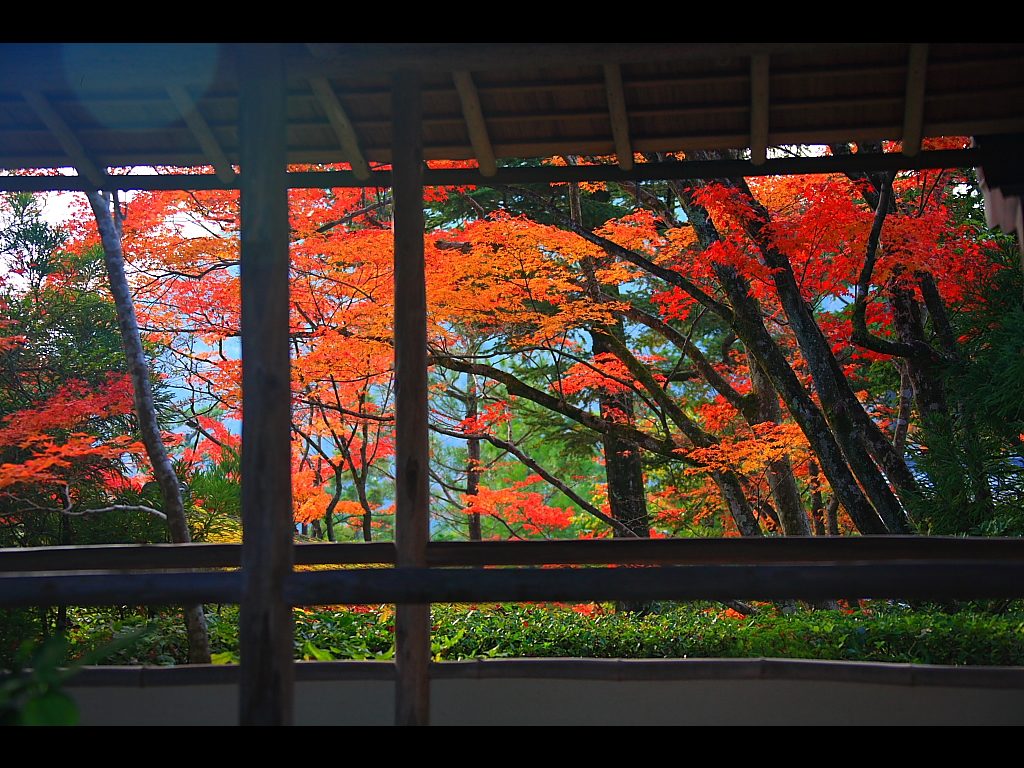 This temple is appointed to the special historic natural features conservation zones by Kyoto-shi. 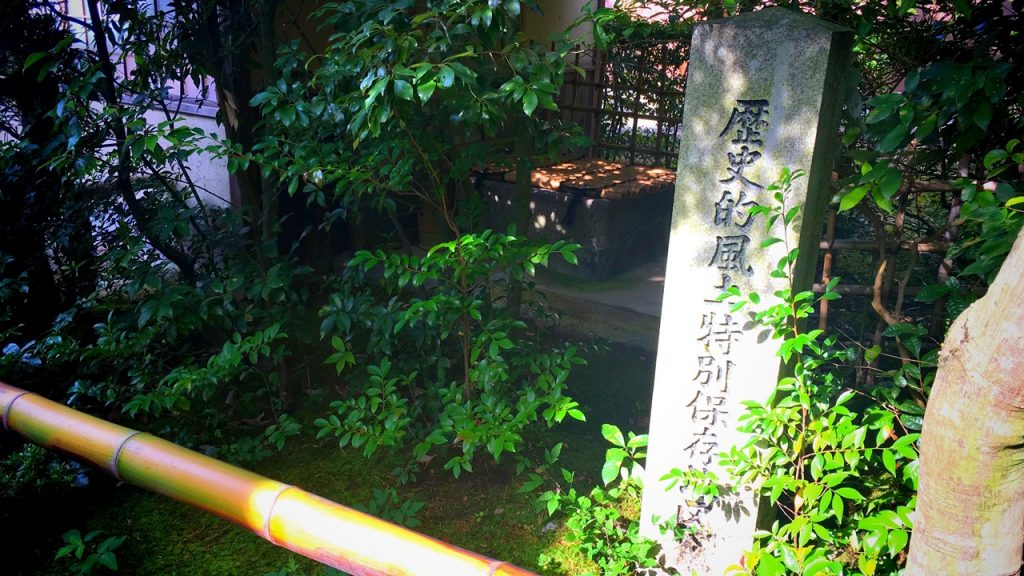 This is the bell tower just before an entrance.
This is a thatched-roofed building. 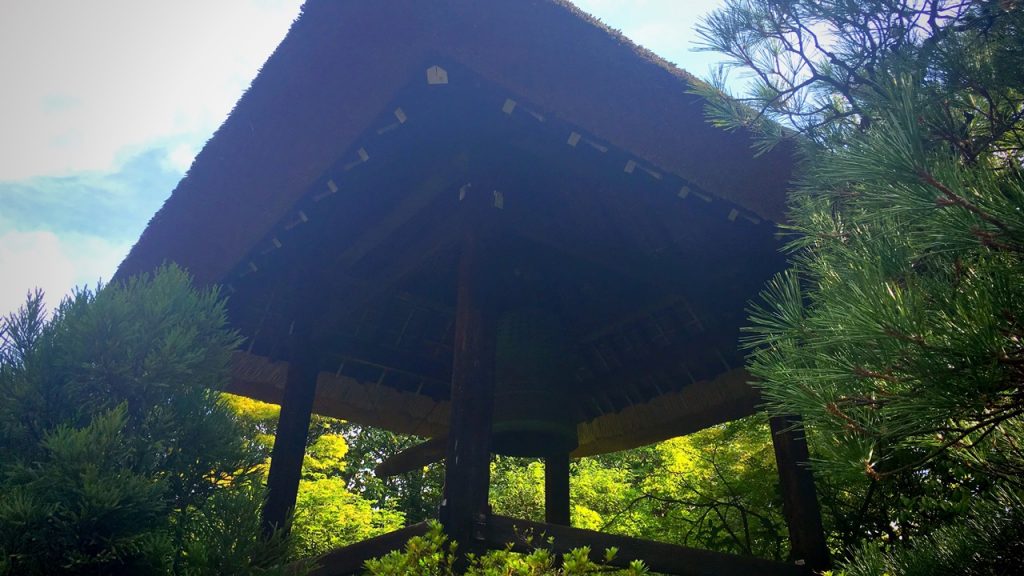 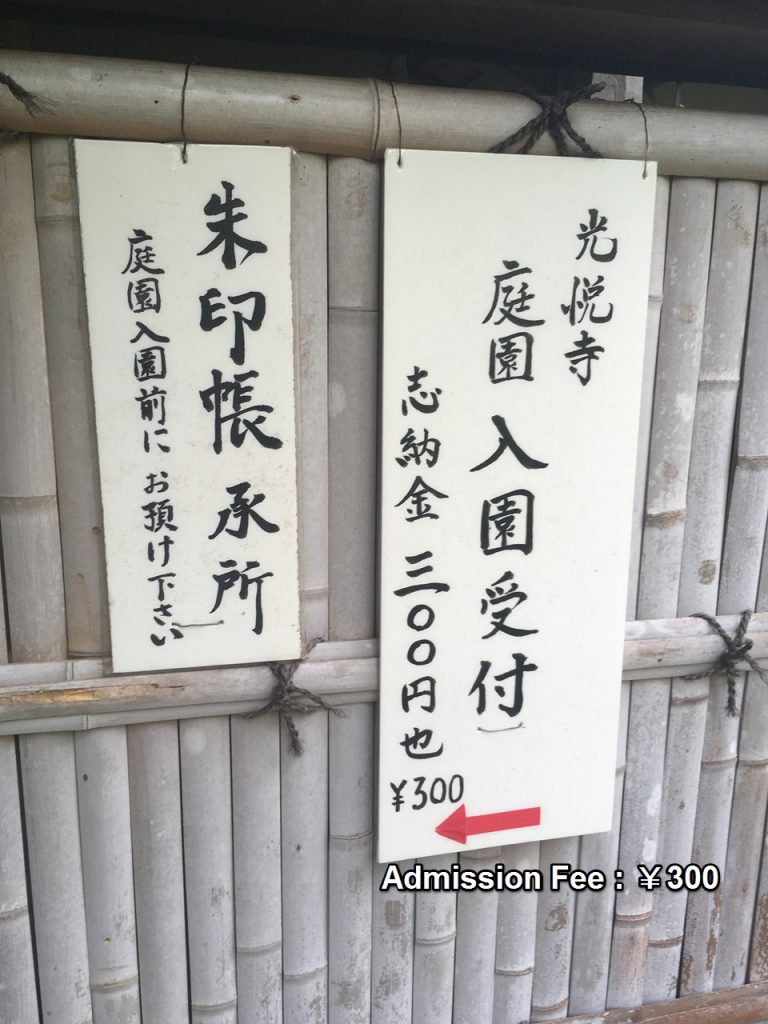 This is the main hall of the temple which was a mansion of Koetsu Honnami. 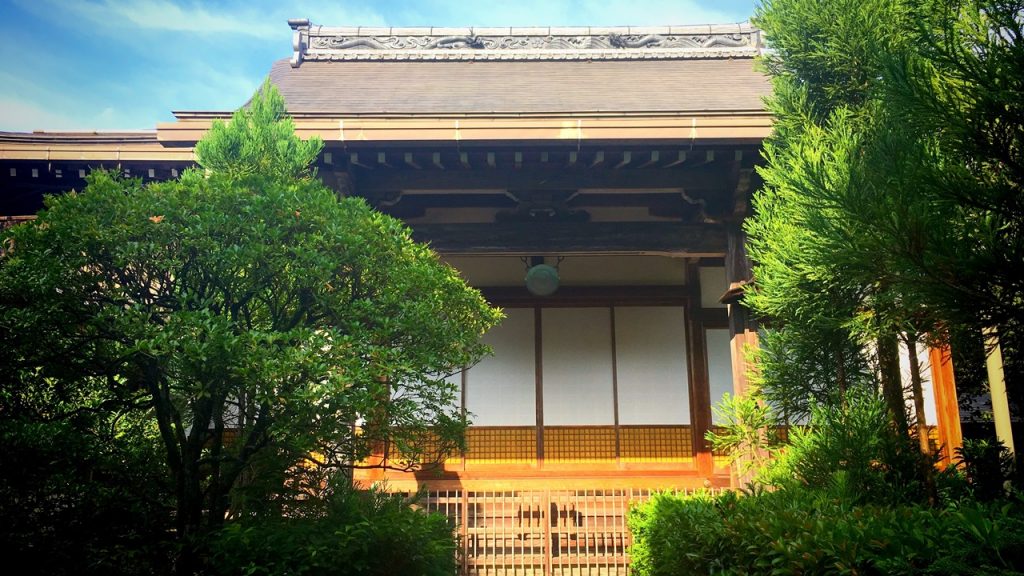 The precincts of this temple were created like the circuit style garden. 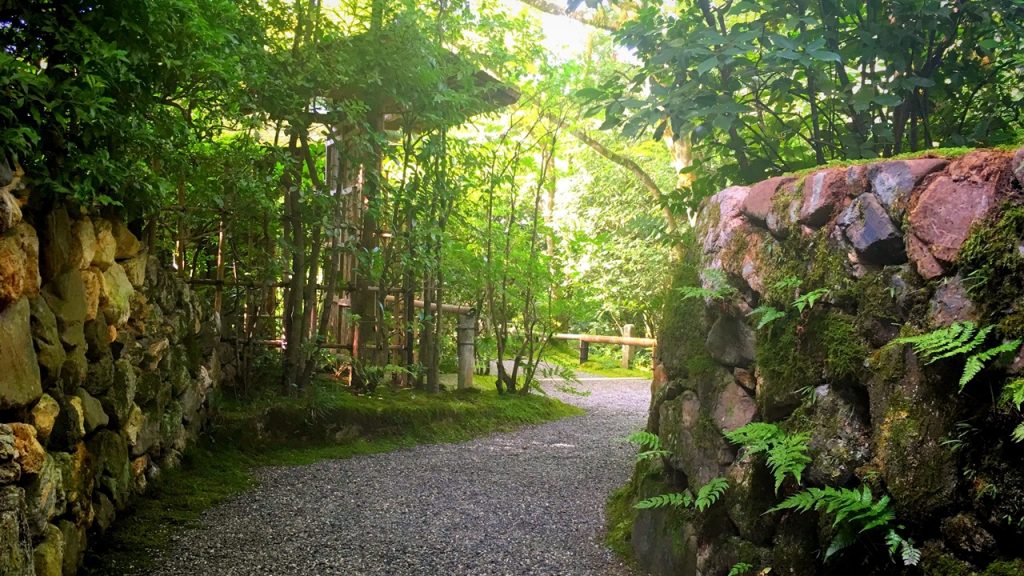 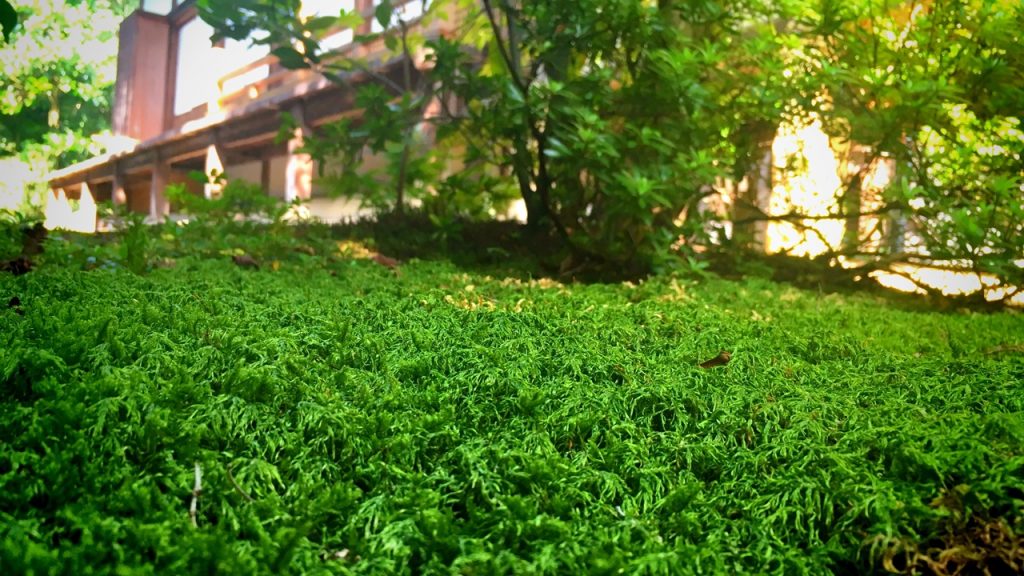 There are seven tea-ceremony rooms in this temple.
One of those is this. This is the tea-ceremony room which is called “Samba-tei(三巴亭)”.
Meaning of “三巴” is said to be “Past, Present, and Future”. 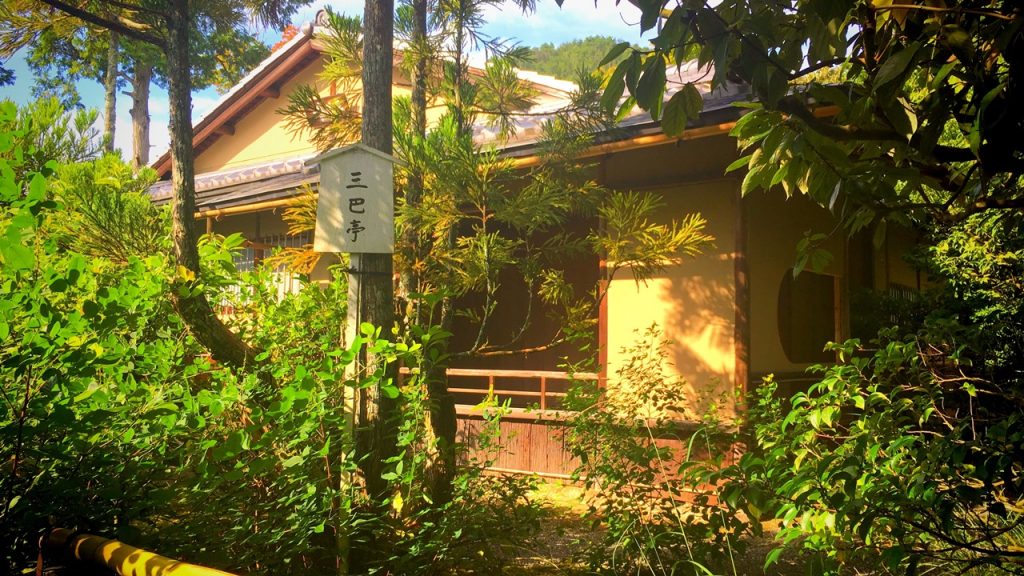 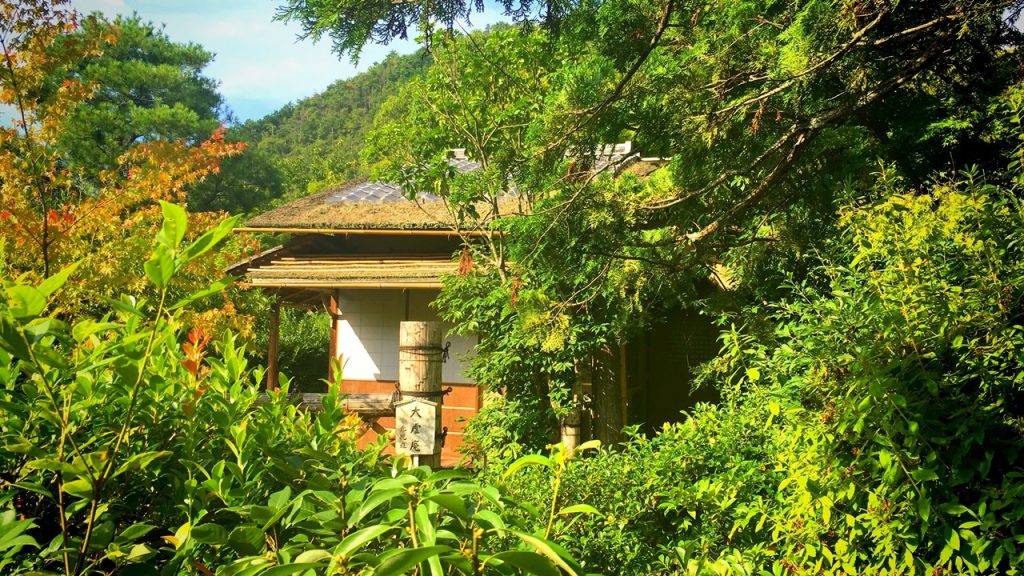 The fence surrounding a tea-ceremony room of Koetsu-ji Temple is called “Koetsu-gaki(光悦垣)”.
The characteristic of this fence is it which is made of bamboo woven in a lozenge pattern. 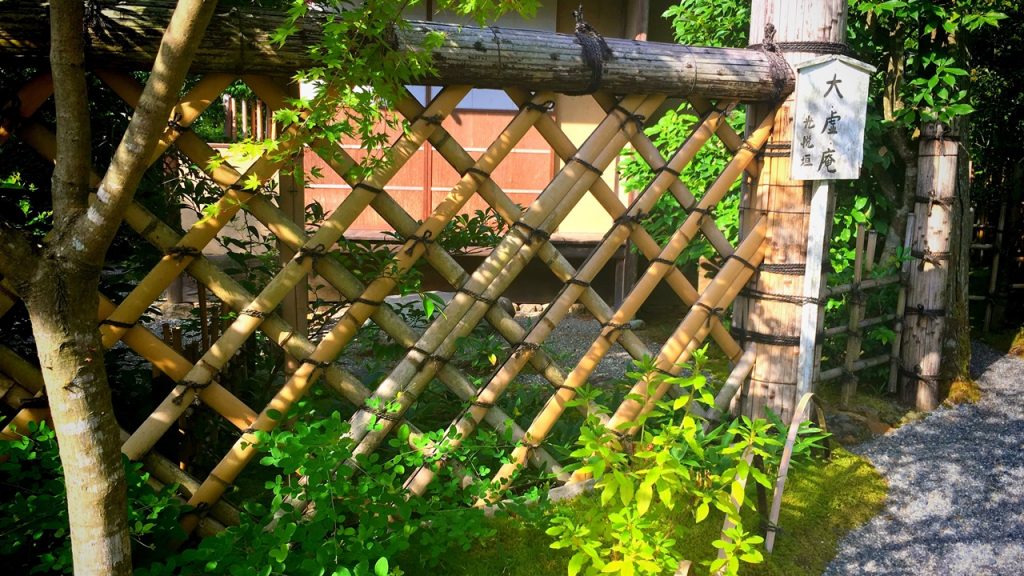 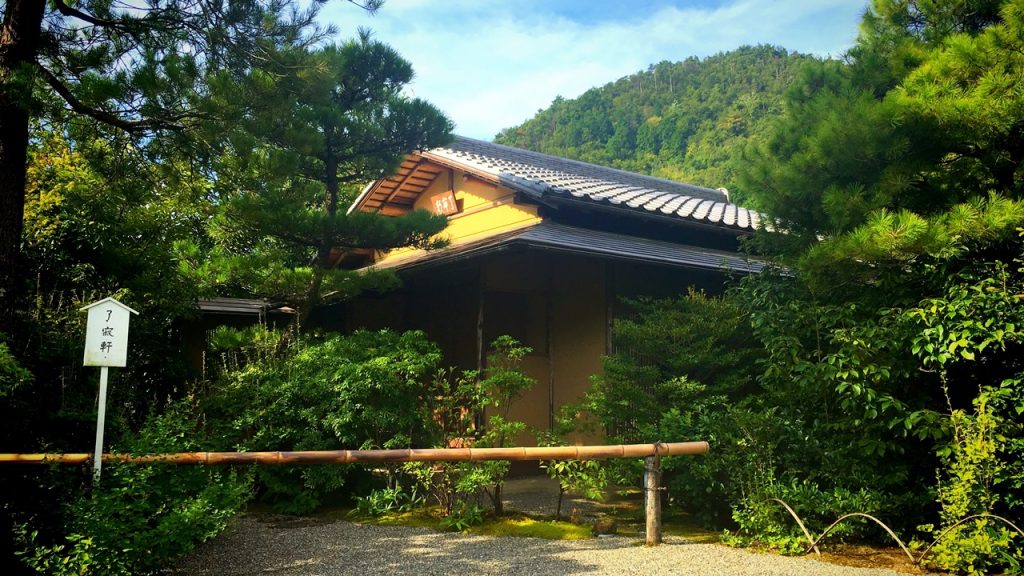 This is the tea-ceremony room which is called “Tokuyu-an(徳友庵)”.
Koetsu was also said to be alias “tokuyusai(徳友斎)”. 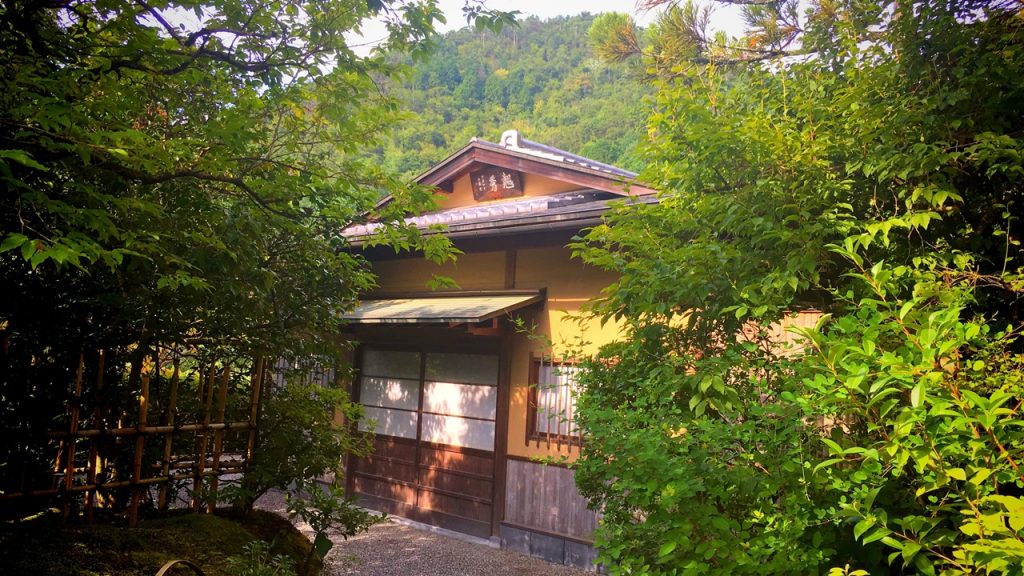 We can look at the scenery of a splendid mountain from the veranda of this building. d(*ﾟーﾟ*) 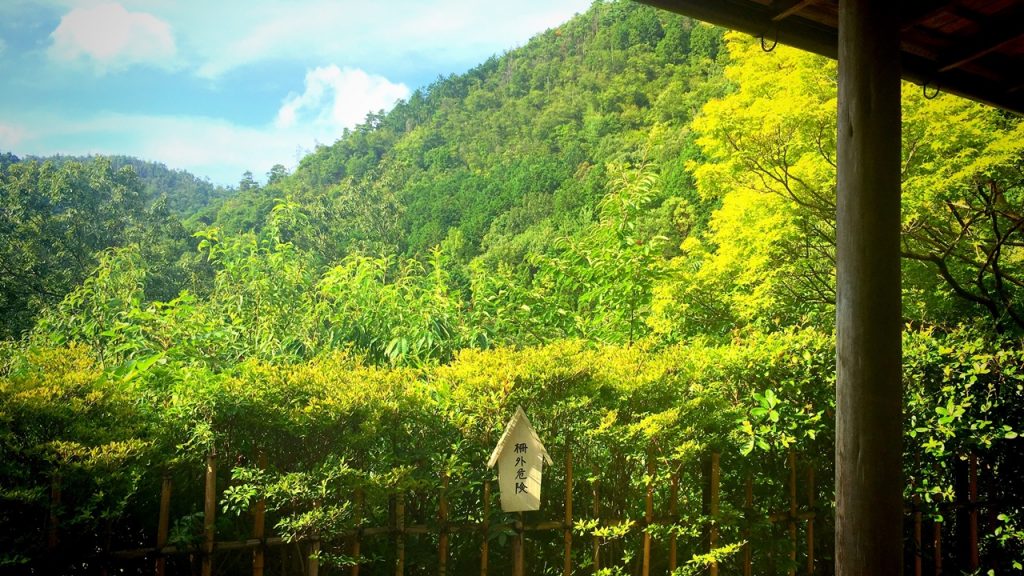 There is the Honami’s family cemetery in the neighbor of the Tokuyu-an(徳友庵). 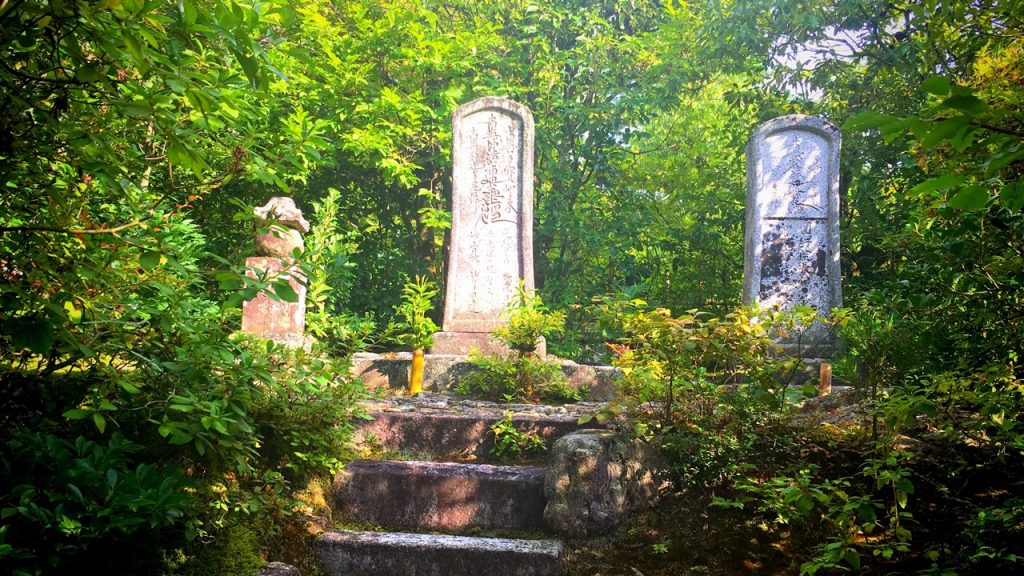 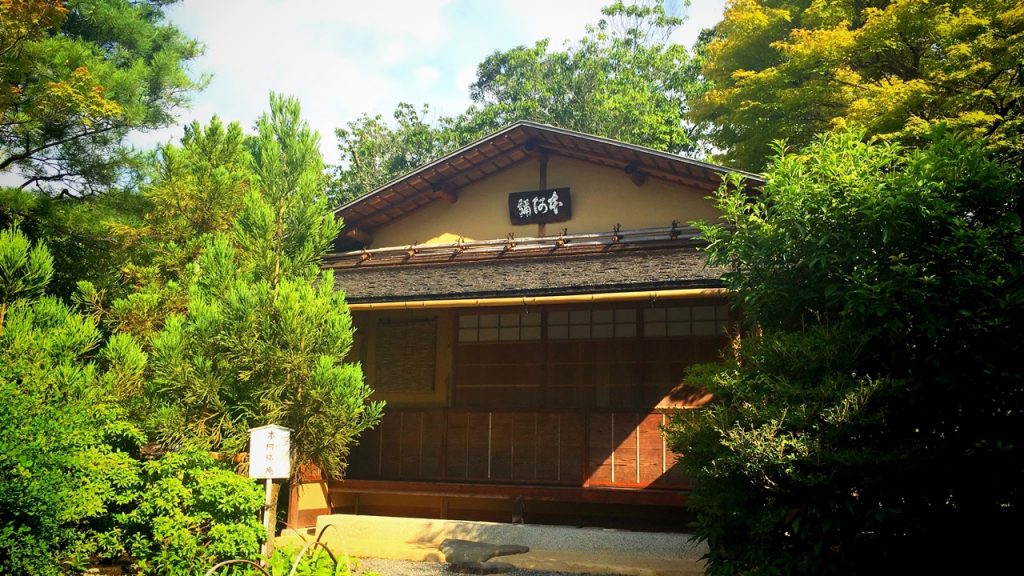 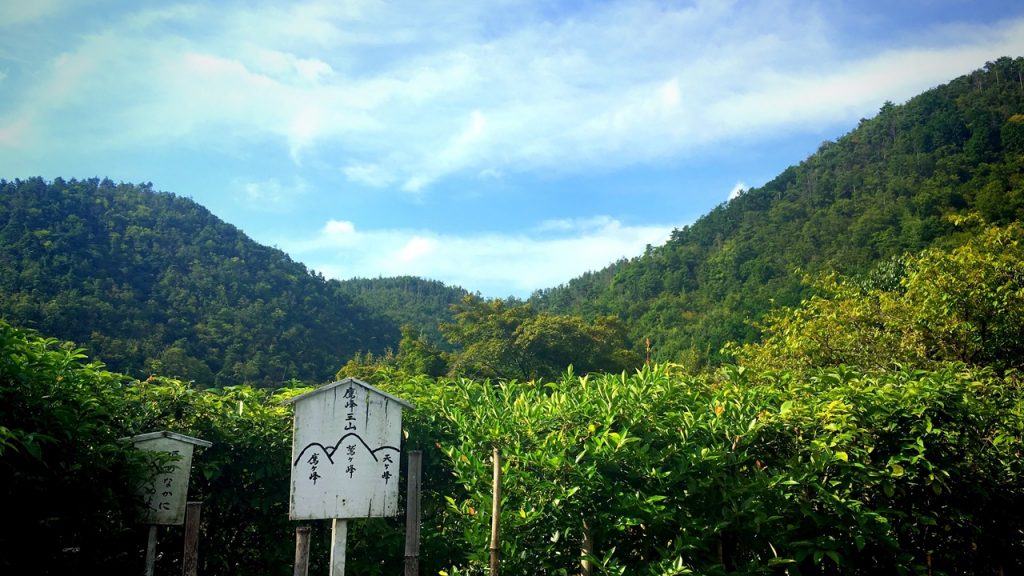 There is a cemetery of Koetsu Honami in the depths of the precincts. 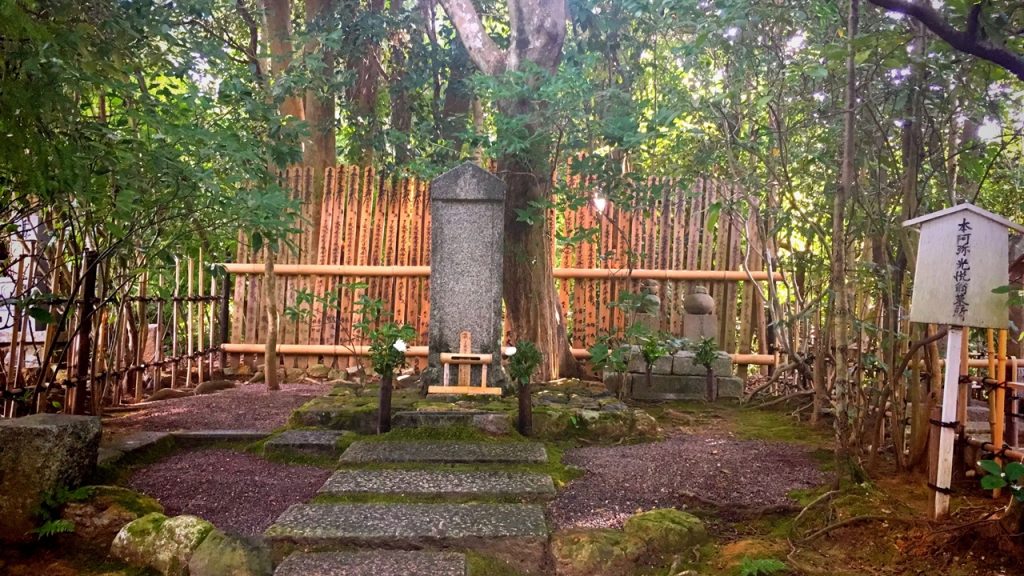 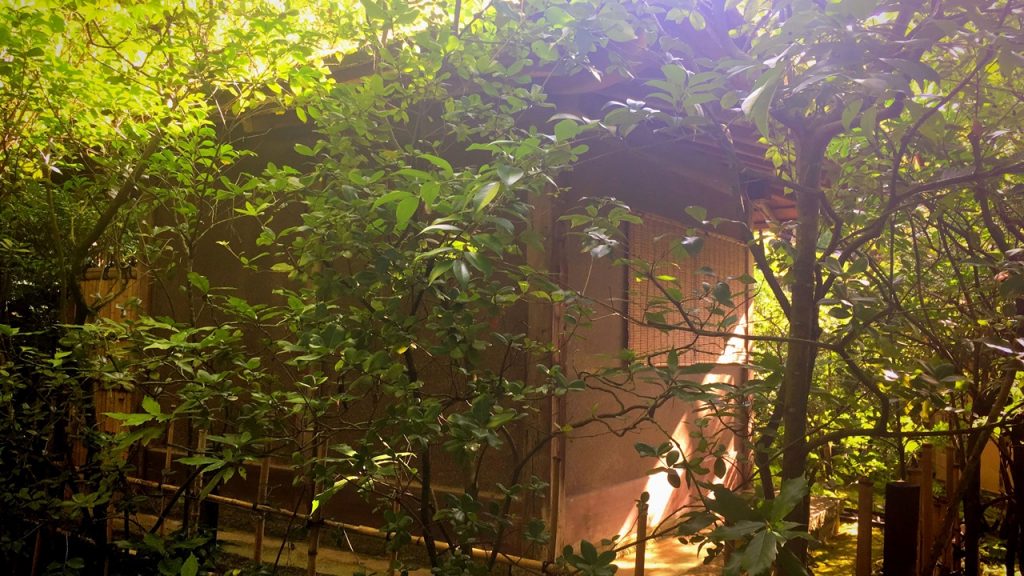 This Temple’s Sumigaki(The words which was written with a sumi(black ink)) is “Nam-myoho-renge-kyo(南無妙法蓮華経)”.
By the way, they distinguish the stamp of the temple of the Nichiren Sect from the stamp of other Sect of temples.
Let’s prepare the private ‘goshuin-cho’ (goshuin note) for the temple of Nichiren sect if possible. 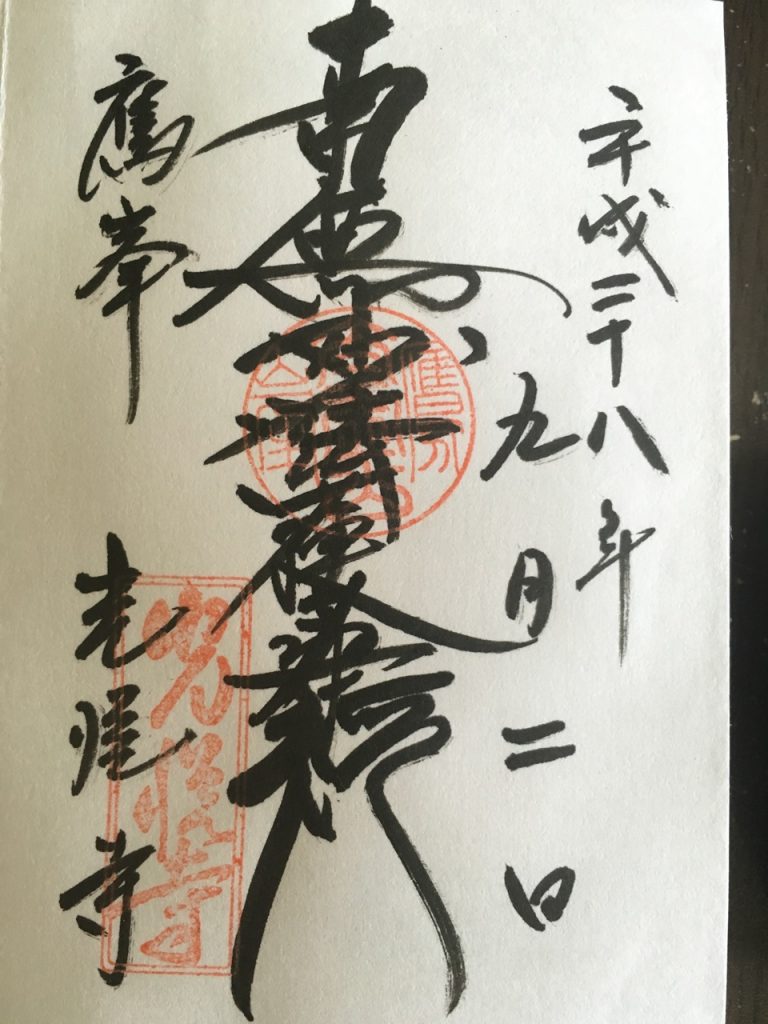 4.How to get to Koetsu-ji Temple 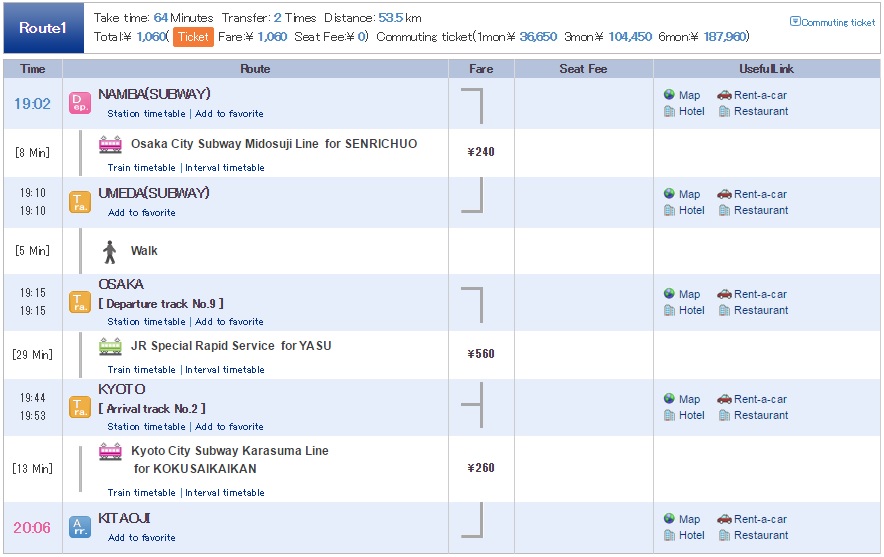 ■Kitaōji Station→Koetsu-ji Temple (In the case of using the bus.) 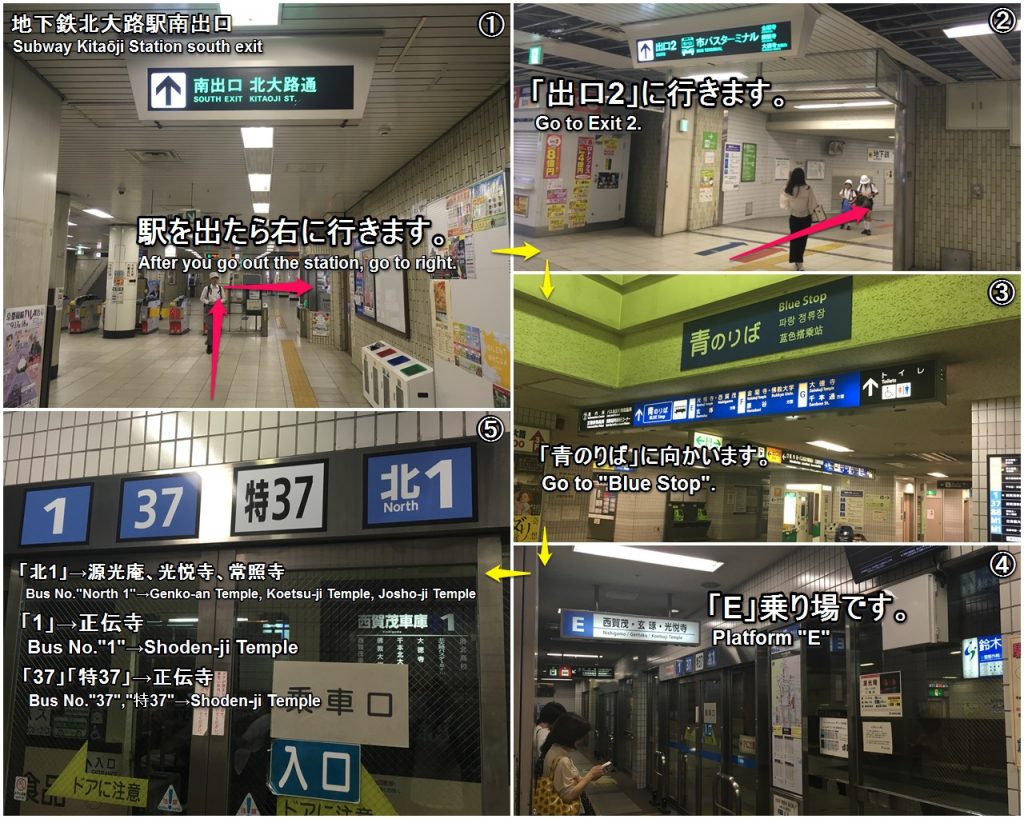 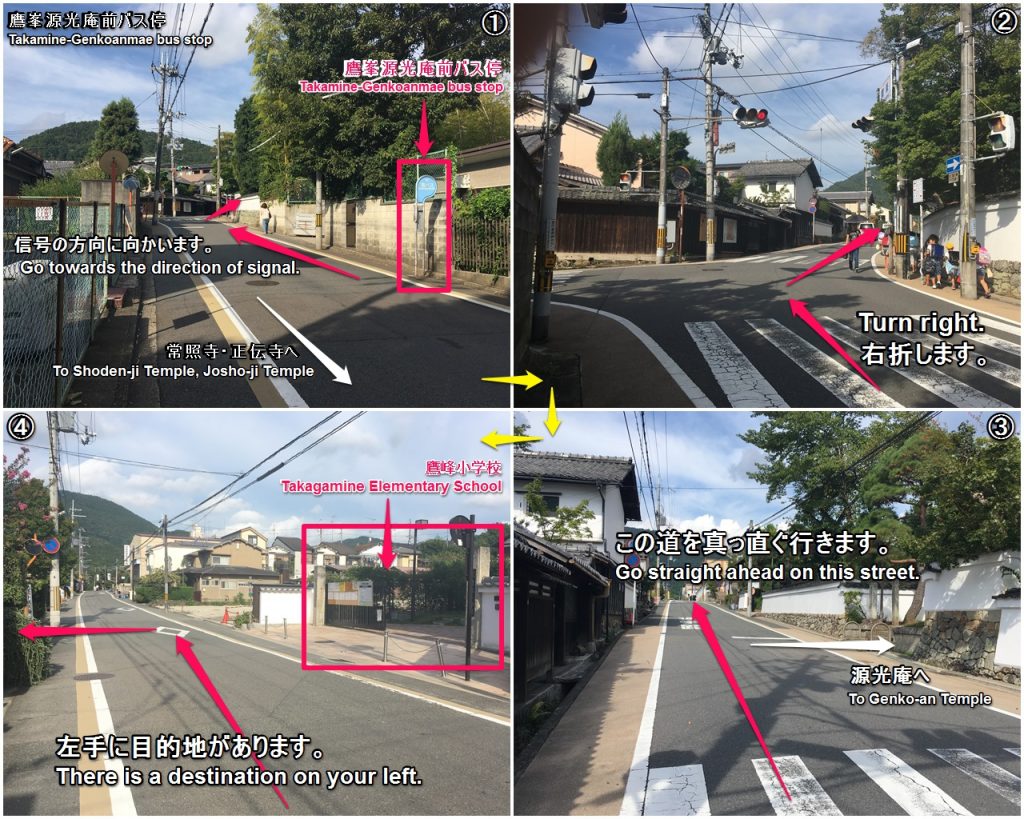 This temple which is the famous place of the colored leaves in the corner of the residential area is very recommended.
By all means, please go at the time of colored leaves.  XD