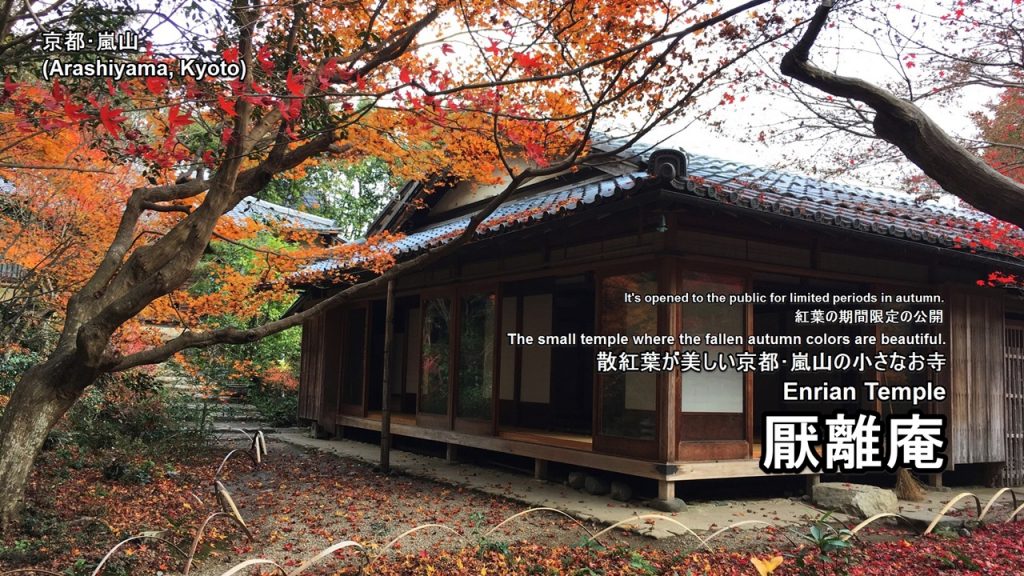 Enrian Temple is a small temple of the Tenryuji School of the Rinzai Sect located in Ukyo Ward, Kyoto City, Kyoto Prefecture.

Do you know ‘Ogura Hyakunin Isshu (Hundred Poems by One Hundred Poets)‘ ??

This collection of poems is familiar to everyone, and it has had great influence on the Japanese people’s appreciation of waka.
FUJIWARA no Teika is said to have built Ogura villa in this area and selected Ogura Hyakunin Isshu in the villa–the site where Enrian Temple now stands.

Here is the birthplace of Ogura Hyakunin Isshu.

In addition, it’s opened to the public for limited periods in autumn.
It is a small temple, but is known as a famous place of colored leaves of Arashiyama, Kyoto.

The word ‘厭離(Enri)’ has a meaning of ‘the condition of not being bored’.

So, I went to Enrian Temple this time.

Enrian Temple is a small temple of the Tenryuji School of the Rinzai Sect located in Ukyo Ward, Kyoto City, Kyoto Prefecture.
The principal image of this temple is Nyoirin Kannon (the Bodhisattva of Compassion). 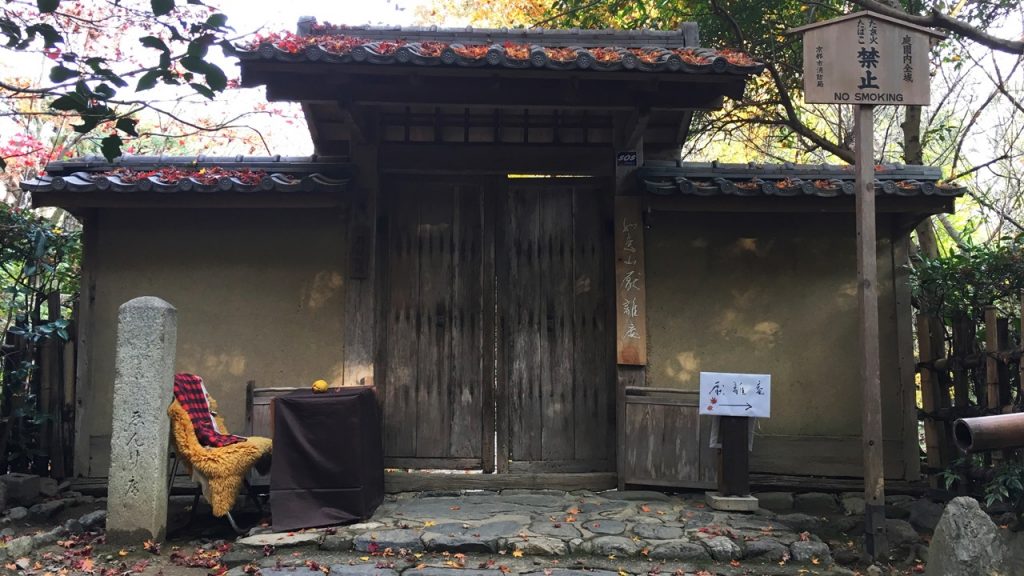 FUJIWARA no Teika is said to have built Ogura villa in this area and selected ‘Ogura Hyakunin Isshu (Hundred Poems by One Hundred Poets)‘ in the villa–the site where Enrian Temple now stands. 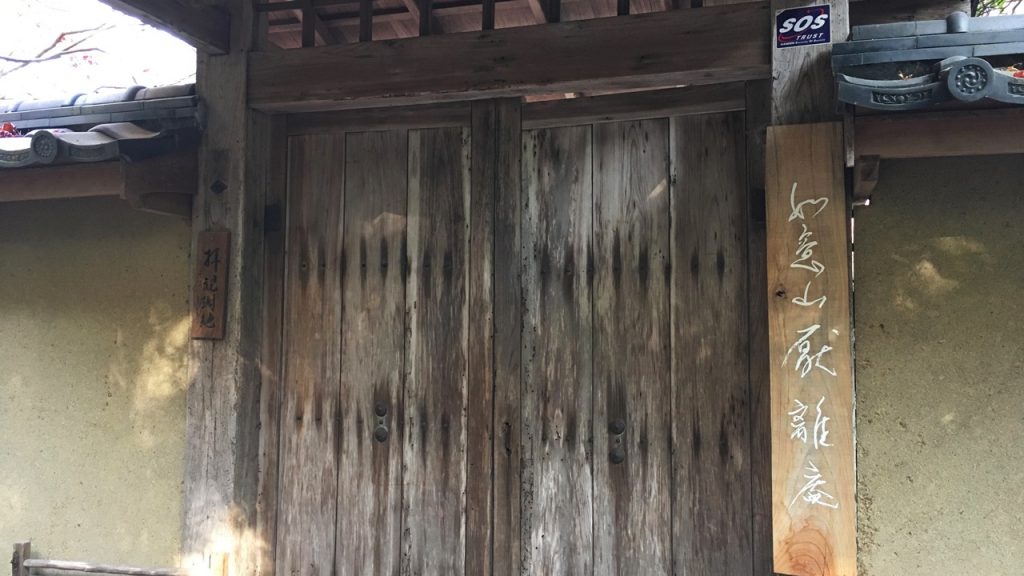 Ogura Hyakunin Isshu is believed to begin with 100 decorative waka which had been selected by FUJIWARA no Teika as fusumae (images drawn on fusuma sliding door) when he lived in his villa in Kyoto, Ogura villa. 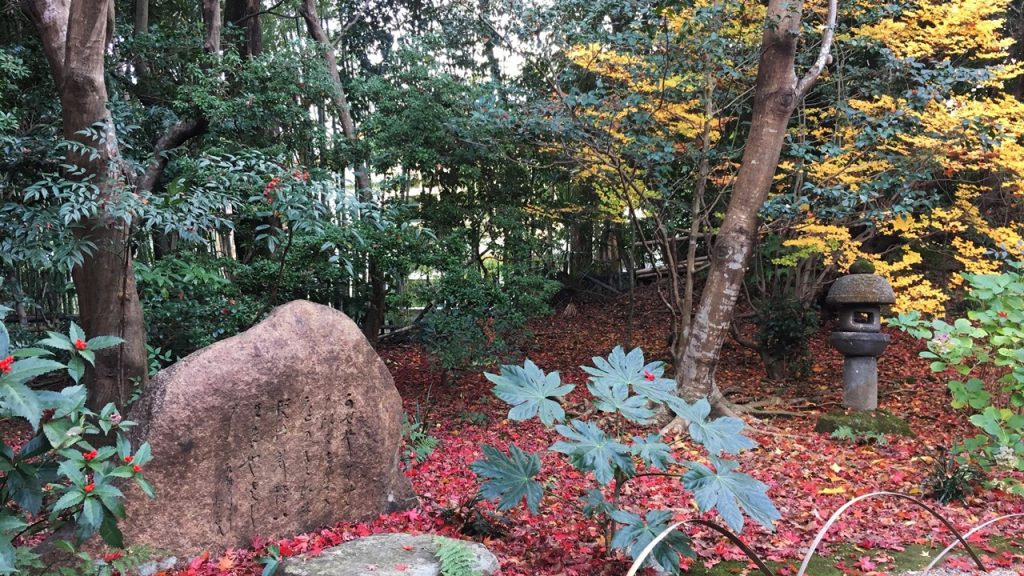 This collection of poems is familiar to everyone, and it has had great influence on the Japanese people’s appreciation of waka.
I also memorized this poems when I was an elementary school student. 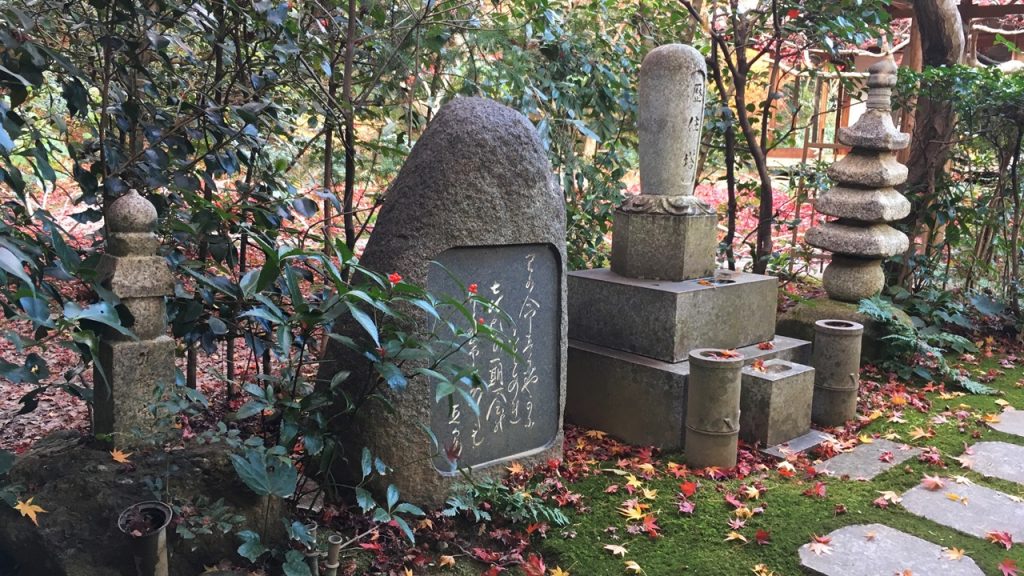 When you go to Enrian Temple, let’s be careful about the following points.

This temple is opened to the public only at the time of colored leaves (From November to early December).

*Special admission period is may become changed every year.

②An entrance is hard to find.

I think that you get lost when you check an entrance in GoogleMap.

An entrance is displayed in the north side by GoogleMap.
However, a real entrance is the south side.

I went on December 6, and there was not so many tourist on that day.
The condition of the colored leaves in that day was approximately over 100%.
(The leaf has begun to already fall.)

However, in this temple, the scenery of the fallen leaves are also beautiful.

From this point on, let’s watch a photo and video of Enrian Temple’s autumn leaves. 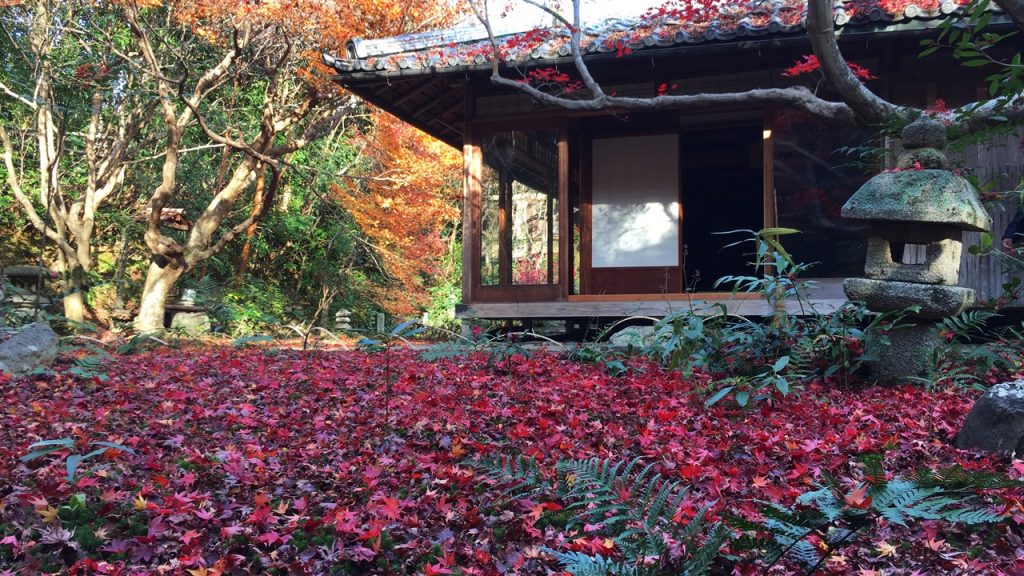 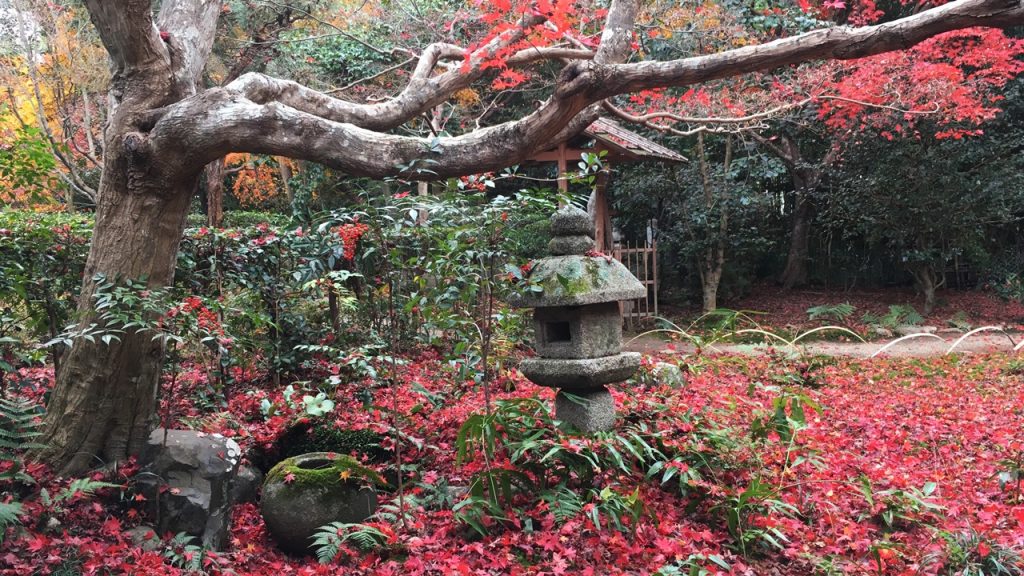 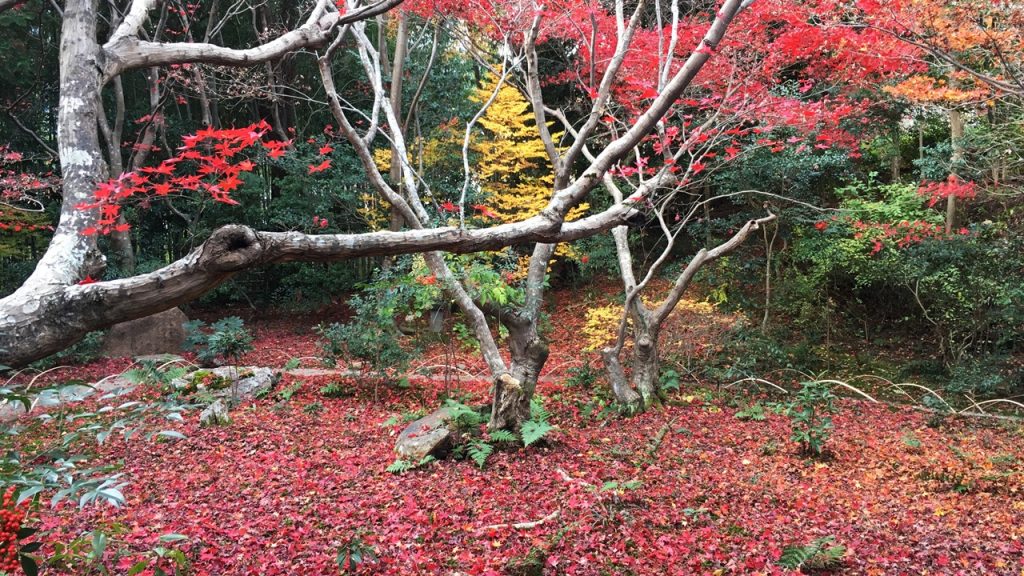 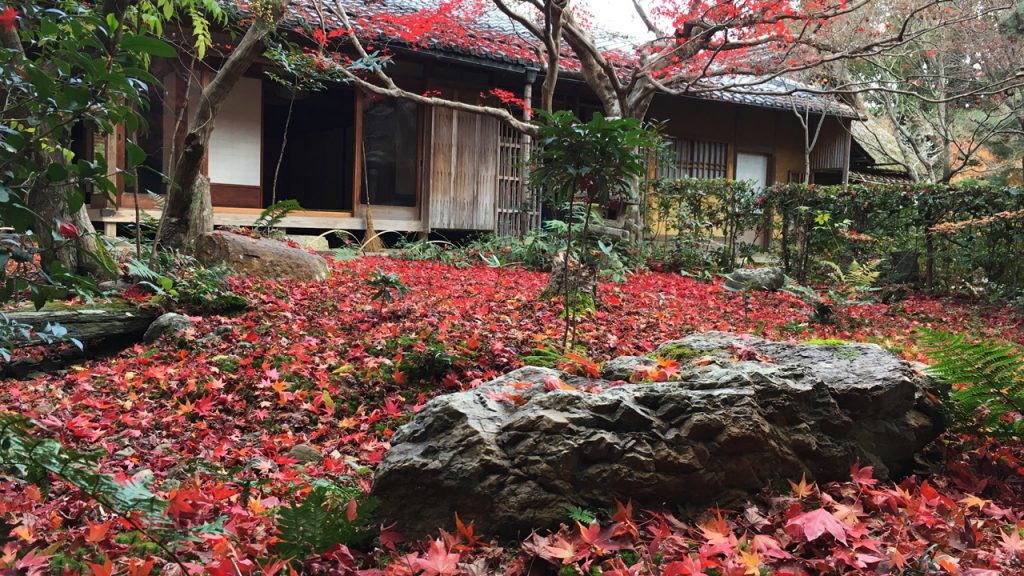 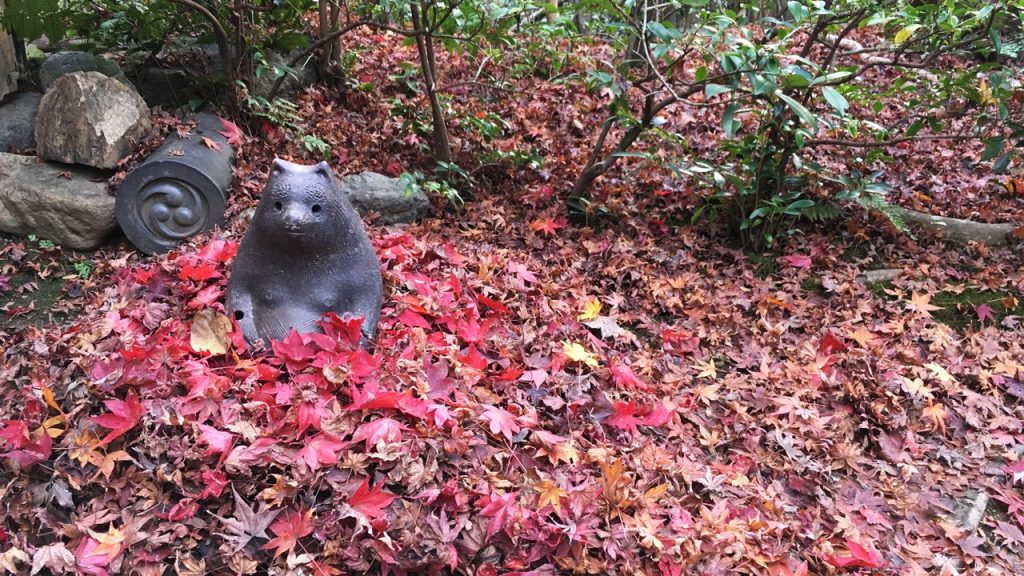 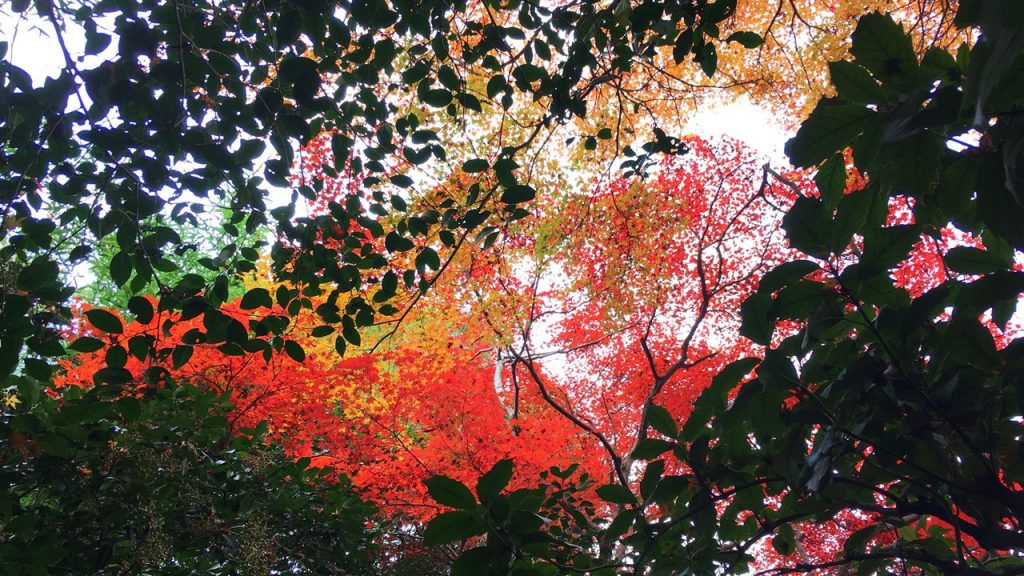 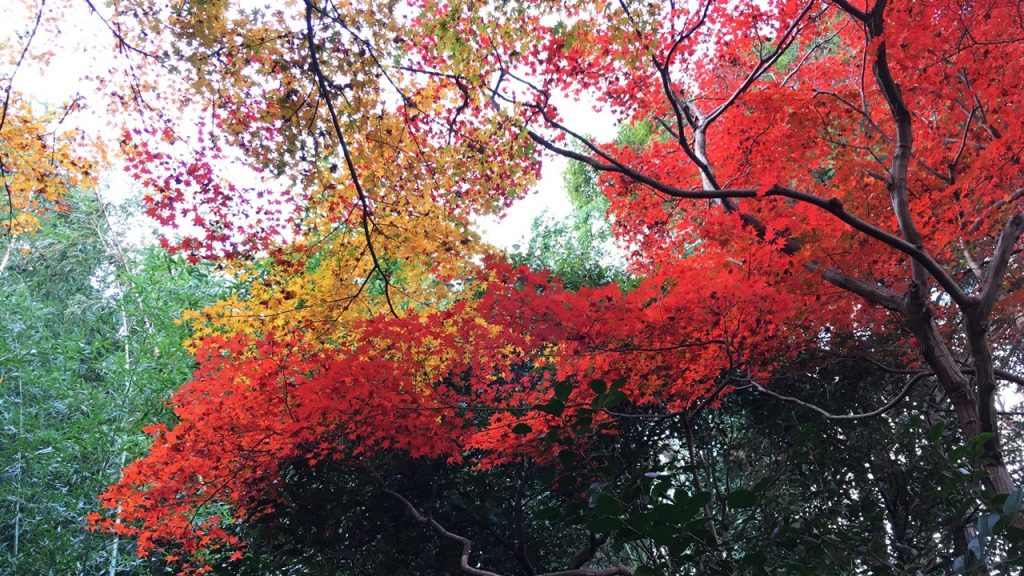 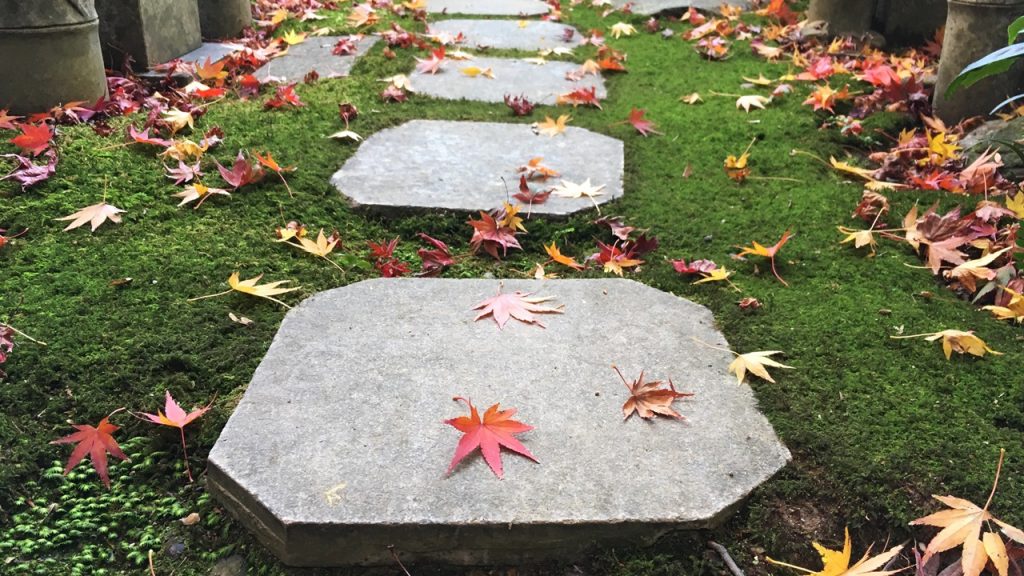 The scenery of the fallen leaves is beautiful, too.

Next, let’s watch the highlight of Enrian Temple!! 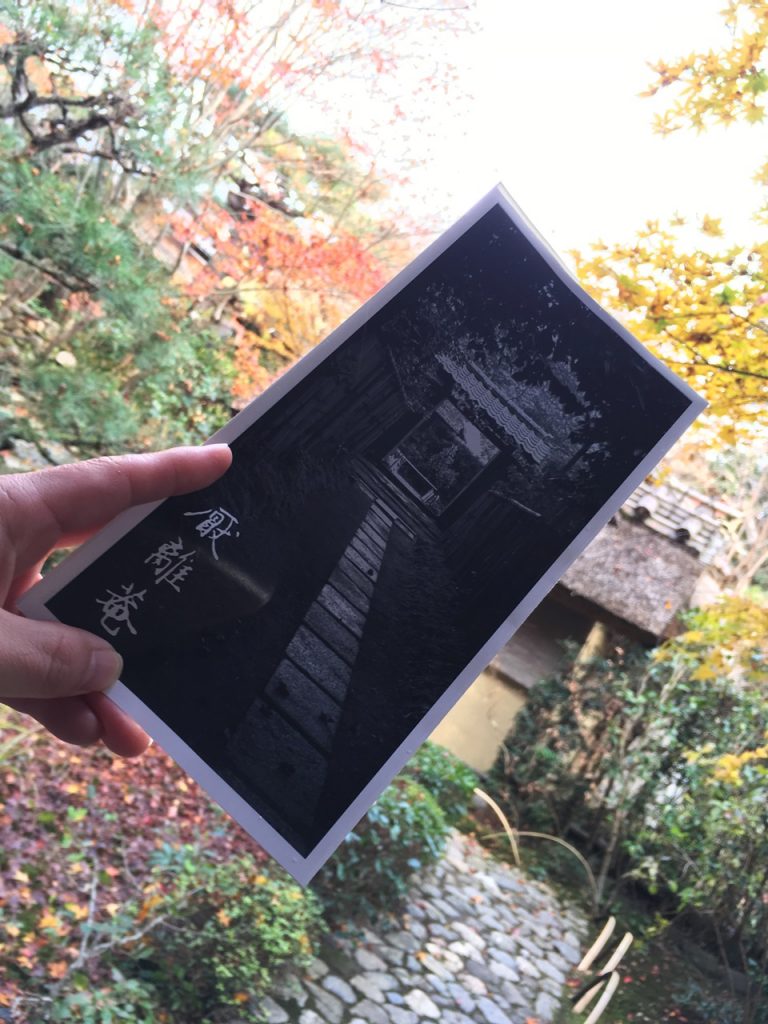 4.The highlights of Enrian Temple

This is San-mon gate (Temple gate) which is the entrance of this temple.
It is a very small gate. 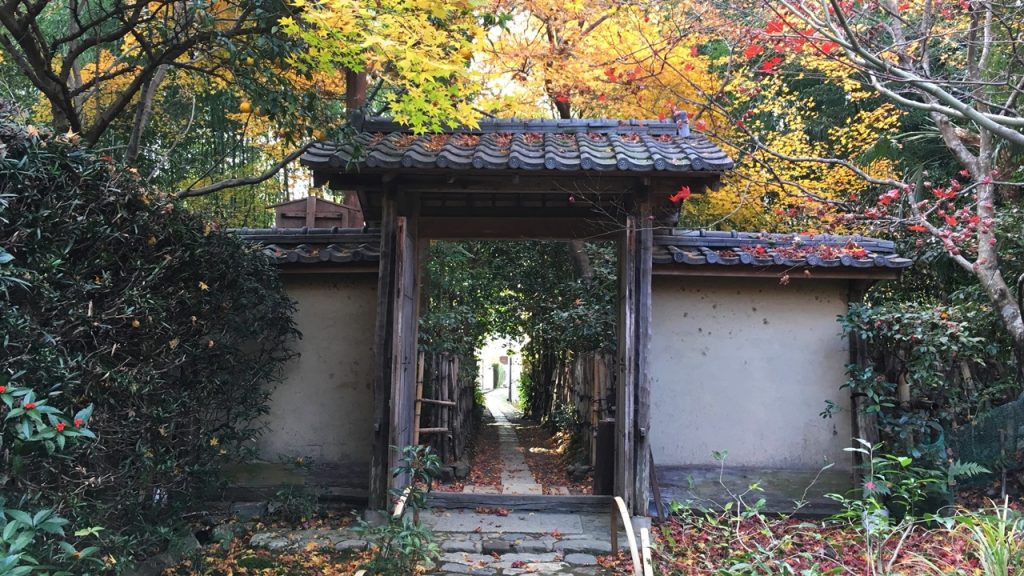 This is a tea house called ‘Shigure-tei‘ which was rebuilt in 1923. 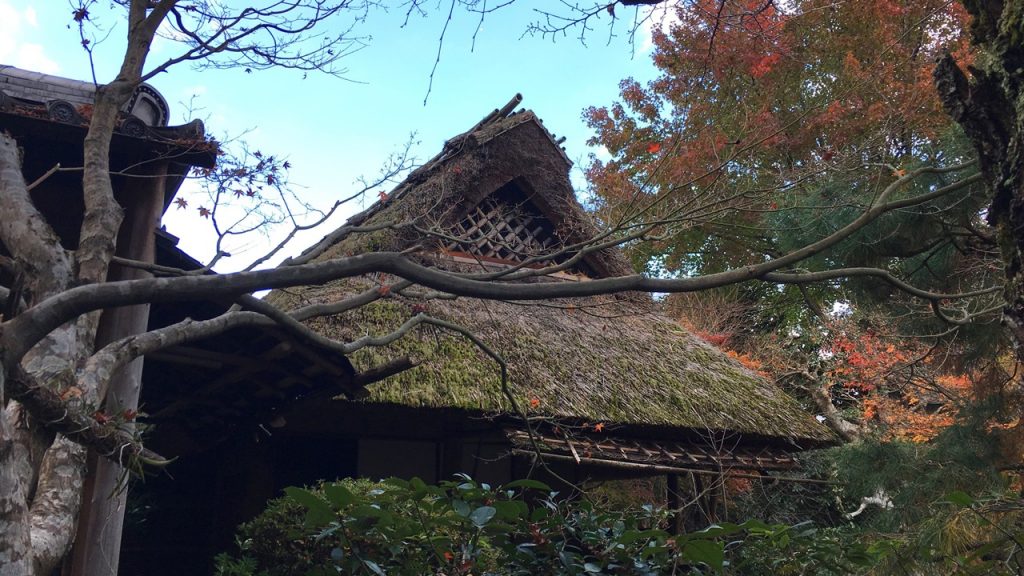 This building was rebuilt in reference to the Shoin (Study hall) of the period of FUJIWARA no Teika. 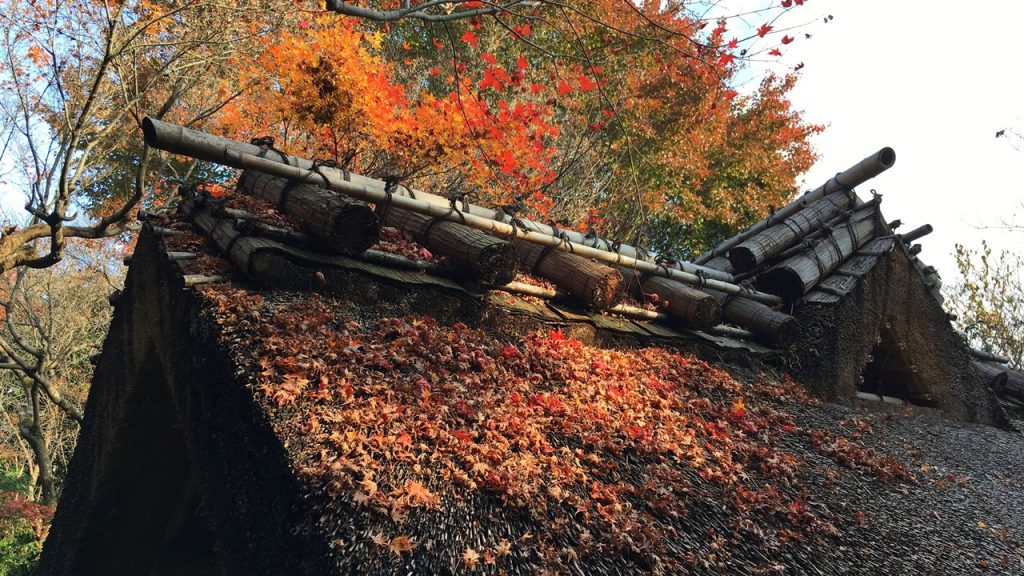 This is Shoin (Study hall). 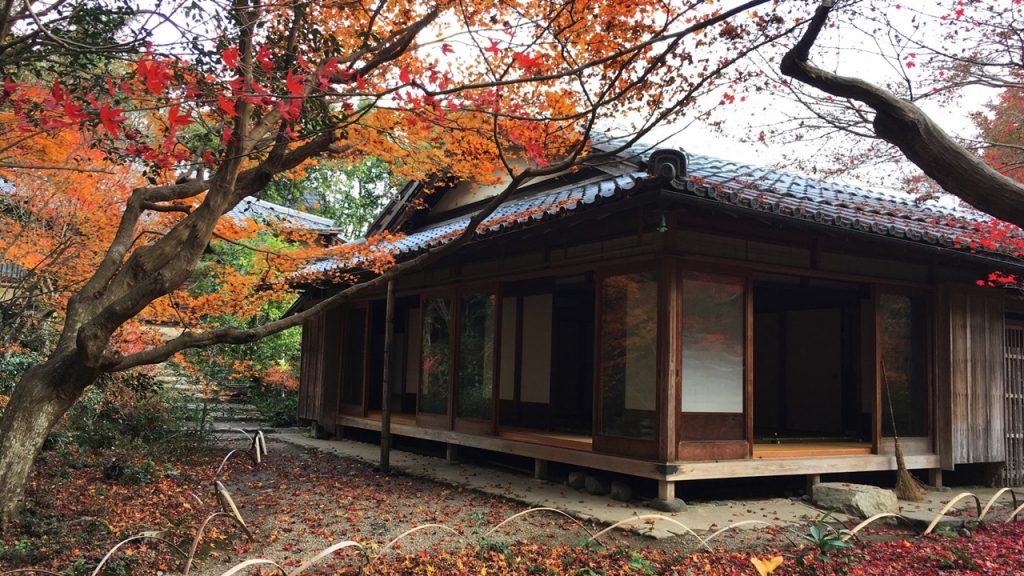 There is a garden in front of the Shoin (Study hall). 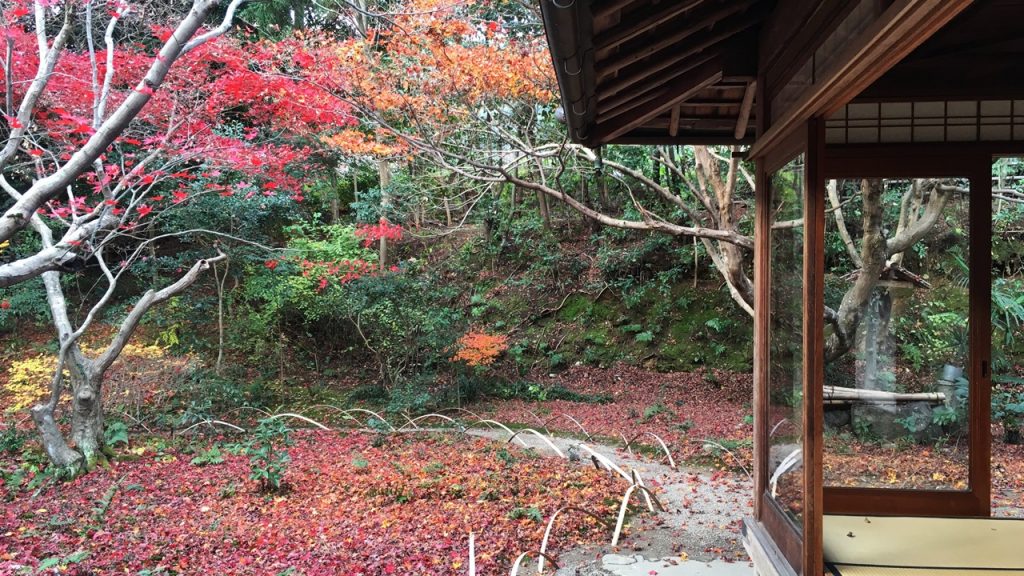 The scenery of the fallen leaves is very beautiful.

This is the Hon-do hall (Main temple).
Because typhoon destroyed this building in 1950, it was rebuilt in 1953. 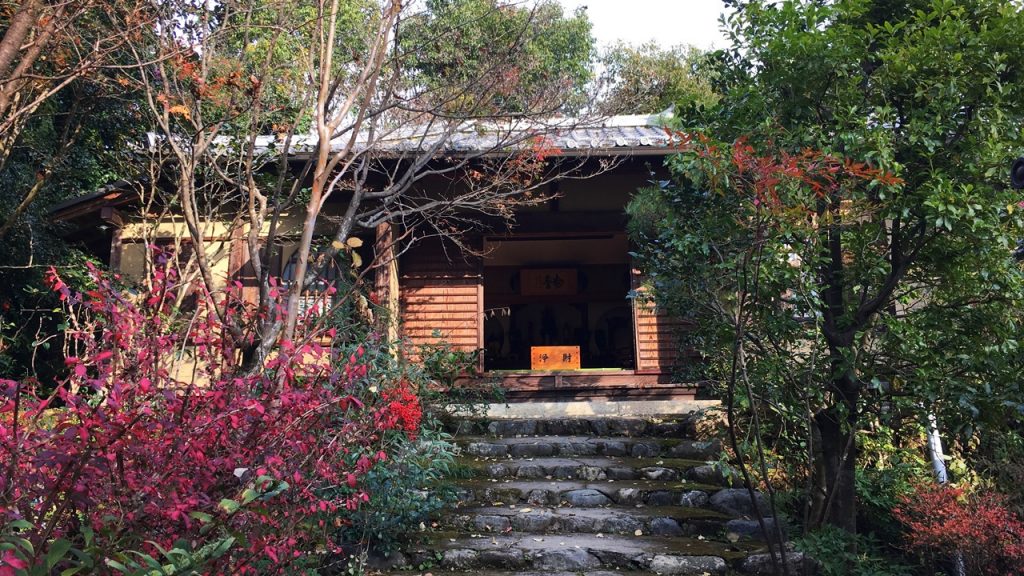 This is the Teika’s mound.
FUJIWARA no Teika is worshiped. 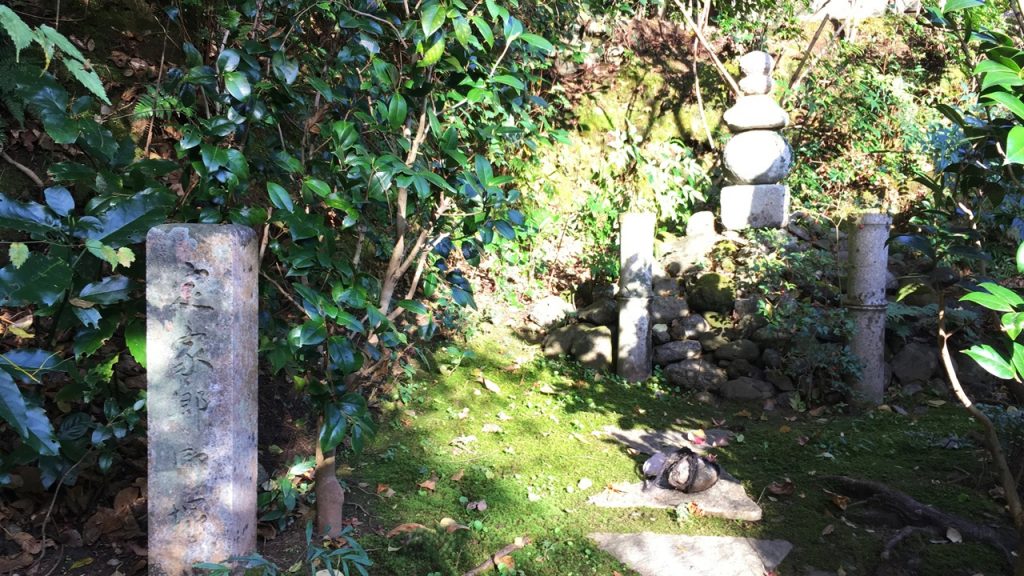 This Temple’s Sumigaki(The words which was written with a sumi(black ink)) is the 31-syllable Japanese poem which FUJIWARA no Teika wrote.
“来ぬ人を まつほの浦の 夕なぎに 焼くや藻塩(もしほ)の 身もこがれつつ“
“Like the salt sea-weed, Burning in the evening calm. On Matsuo’s shore, All my being is aflame, Awaiting her who does not come.” 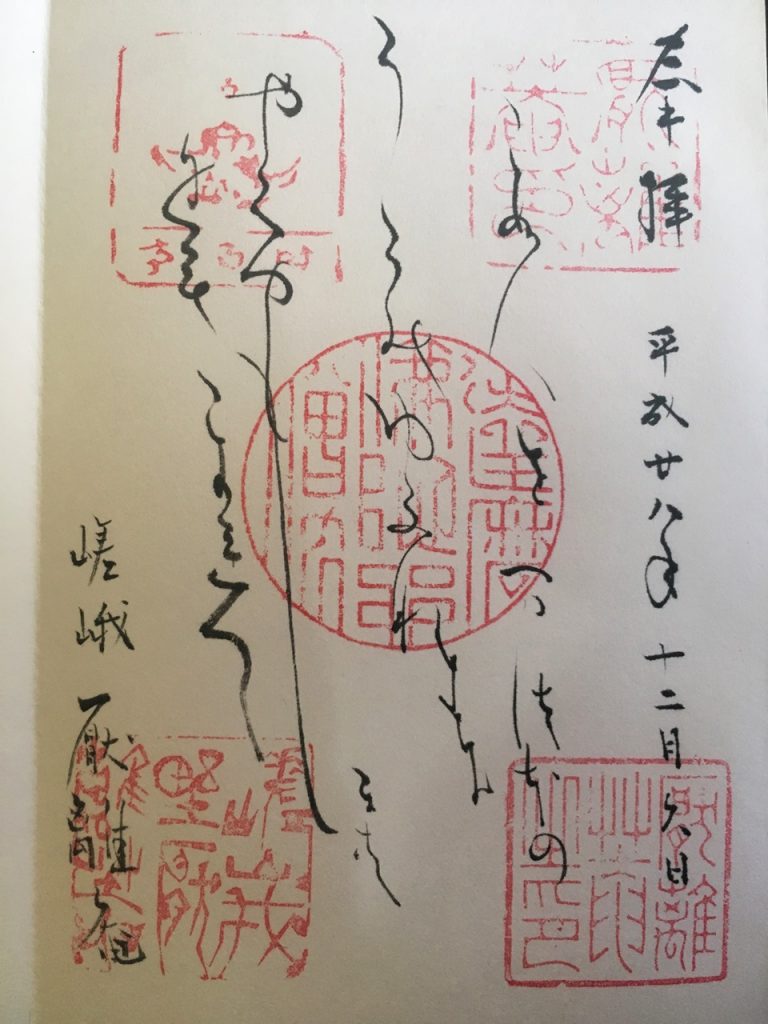 6.How to get to Enrian Temple 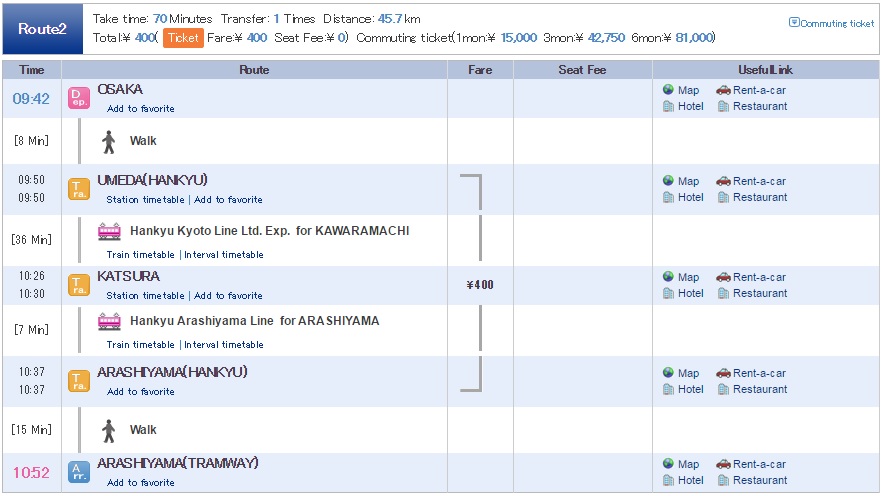 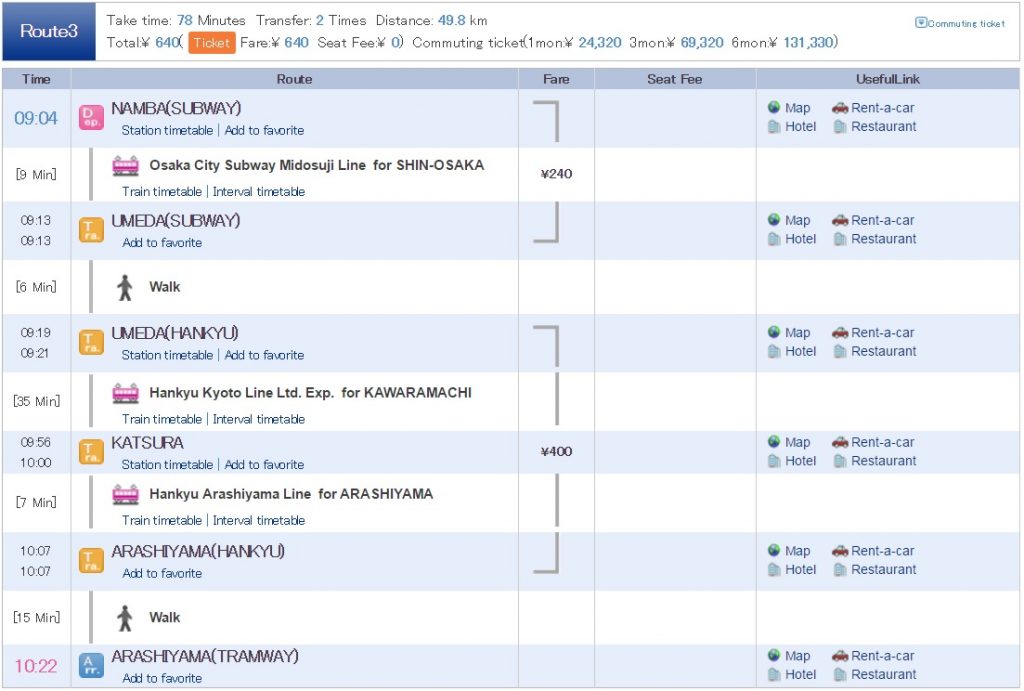 We go on foot or by bus from Randen Arashiyama Station to Enrian Temple.

An entrance is hard to find, please be careful.

■When you go on foot from Randen Arashiyama Station 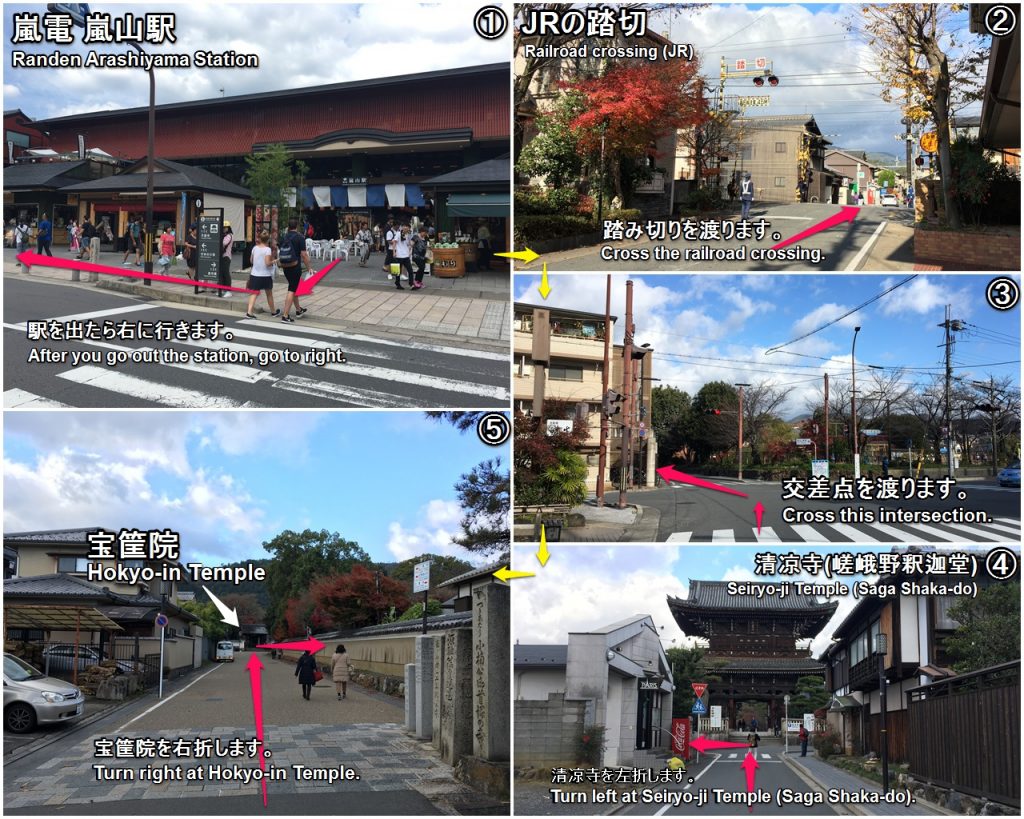 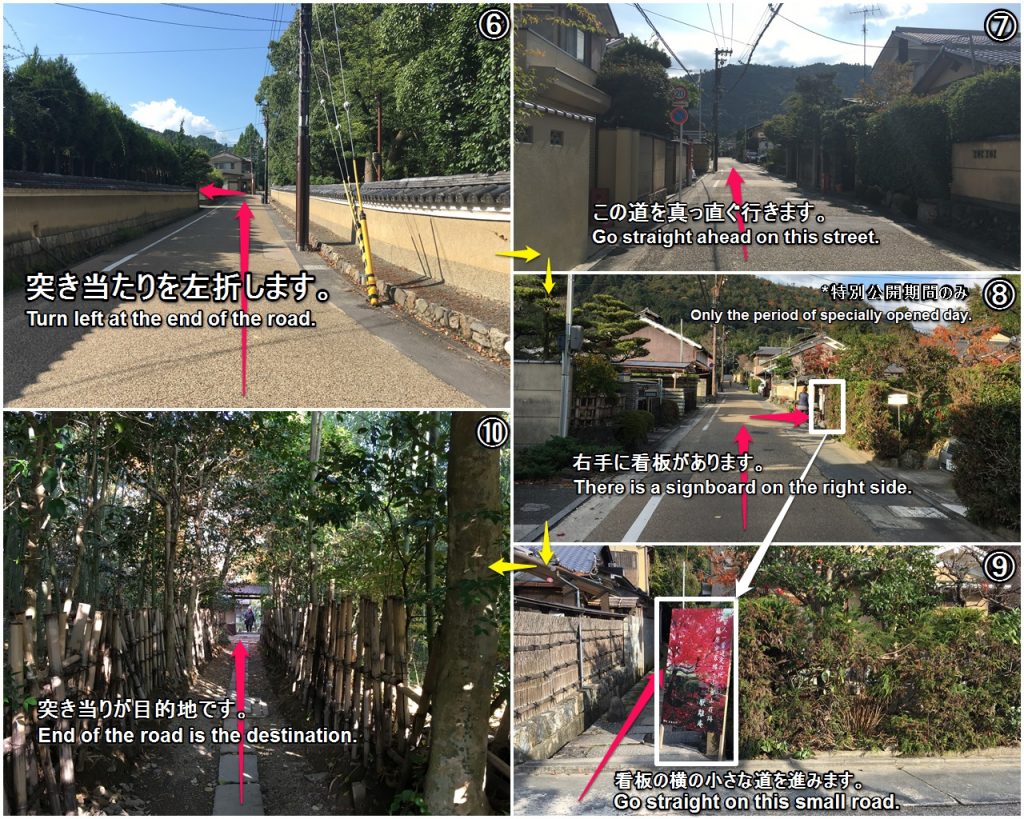 ■When you get on a bus from Randen Arashiyama Station

Timetable and Route Search of bus

■When you take a taxi

[Phone number of taxi dispatch : Around the Kyoto Station]*Japanese text only.

Please try to go to this temple!!