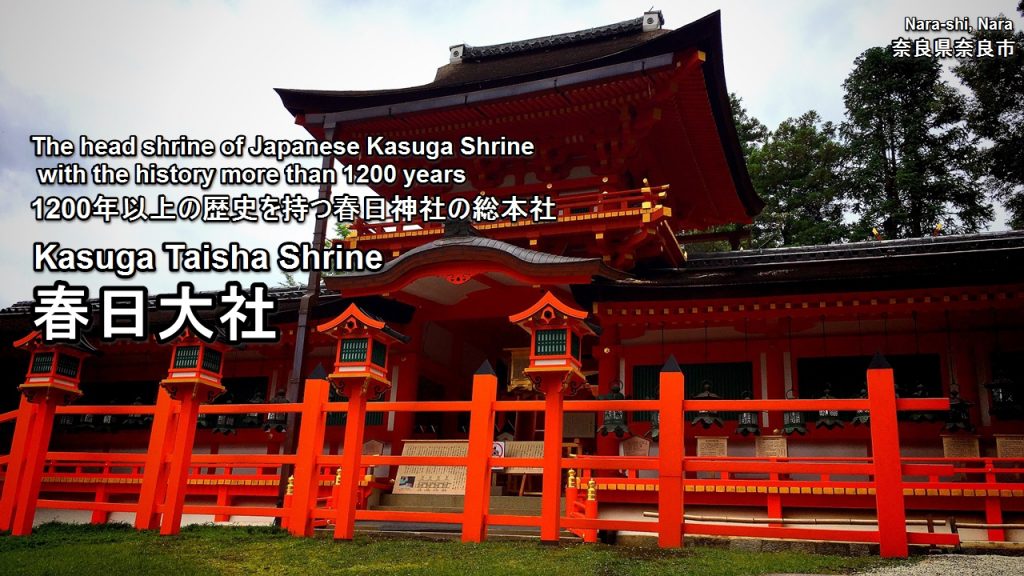 Kasuga Taisha Shrine which is Nara Shrine on behalf of Japan.

It has the history more than 1,200 years, and is the head temple of the Kasuga Shinto shrine which are built in 1,000 places in Japan.

Above all, 3, 000 number of garden lanterns displayed in Kasuga Taisha Shrine is said to be the biggest number in Japan

In addition, Todai-ji Temple and Kofuku-ji Temple are near this shrine.

8 places of temples, shrines and Special Natural Monument of Nara are designated as ‘Historic Monuments of Ancient Nara’.

www.kasugataisha.or.jp
3 Pockets
Kasugataisha shrine / About the Shrine / History
http://www.kasugataisha.or.jp/about/index_en.html
Kasuga Taisha Shrine stands in Nara Park, with the ancient Kasugayama Forest at its back. Listed as a UNESCO World Heritage Site under the name of “Historic Monuments of Ancient Nara”, the shrine was first built during the Nara Period (the 8th century) to pray for the protection of the capital of Heijo-kyo and for national prosperity, and has enshrined within it guardian gods of the Fujiwara Clan. A legend says that the first deity of the shrine appeared on the back of a deer.

Kasuga Grand Shrine (春日大社 Kasuga-taisha) is a Shinto shrine in the city of Nara, in Nara Prefecture, Japan. Established in 768 AD and rebuilt several times over the centuries, it is the shrine of the Fujiwara family. The interior is famous for its many bronze lanterns, as well as the many stone lanterns that lead up the shrine.
The architectural style Kasuga-zukuri takes its name from Kasuga Shrine’s honden (sanctuary).
Kasuga Shrine, and the Kasugayama Primeval Forest near it, are registered as a UNESCO World Heritage Site as part of the “Historic Monuments of Ancient Nara”.
The path to Kasuga Shrine passes through Deer Park. In Deer Park, deer are able to roam freely and are believed to be sacred messengers of the Shinto gods that inhabit the shrine and surrounding mountainous terrain. Kasuga Shrine and the deer have been featured in several paintings and works of art of the Nambokucho Period. Over three thousand stone lanterns line the way. The Man’yo Botanical Garden, Nara is adjacent to the shrine.
引用(citation):https://en.wikipedia.org/wiki/Kasuga-taisha

Because the site of Kasuga Taisha Shrine is very large, there is a lot of highlight.

This is Haraido Shrine which is one of Setsumatsu sha (smaller shrines managed under the shrine).
At first you cleanse your hand here to go and worship at Kasuga Taisha Shrine. d(*ﾟーﾟ*) 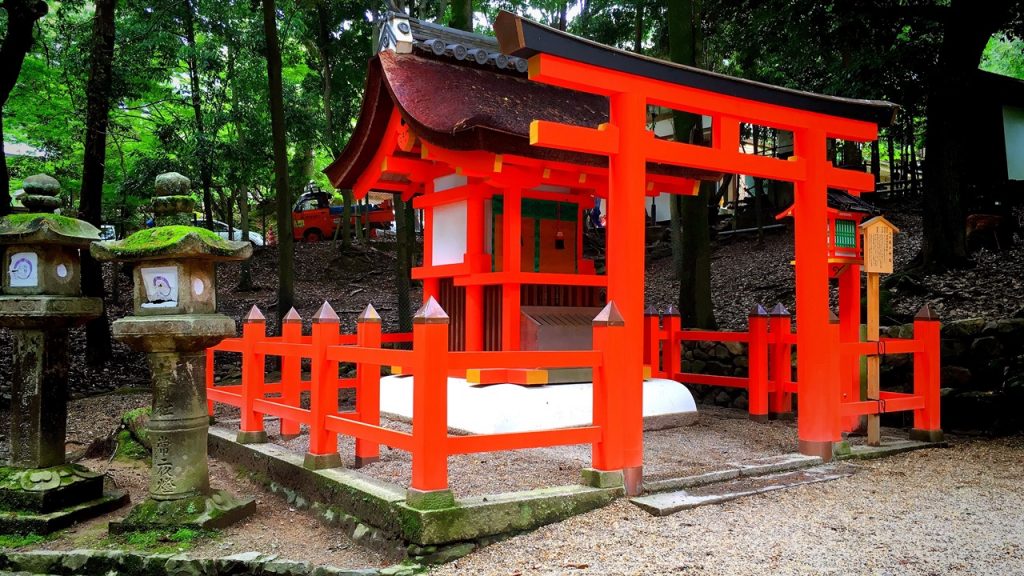 In addition, a lot of deer live in Kasuga Taisha Shrine because there is it near Nara-koen Park. (○´艸｀) 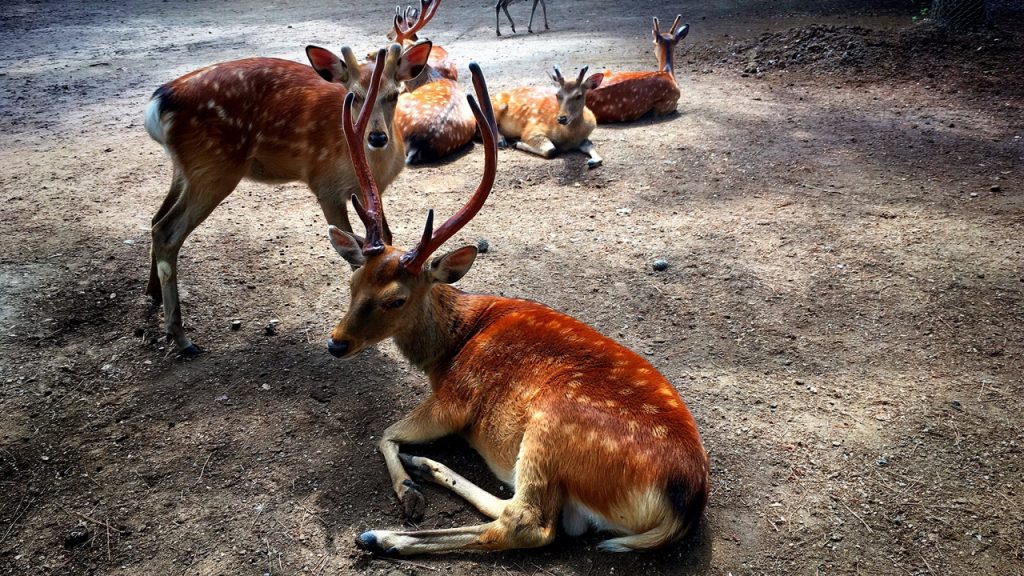 Shinto ritual which is called “万燈籠(Mantourou)” is performed on August 14, August 15 and The Last Day of Winter (Setsubun). Because all garden lanterns are lighted in the day of “万灯篭(Mantourou)”, it is very beautiful. 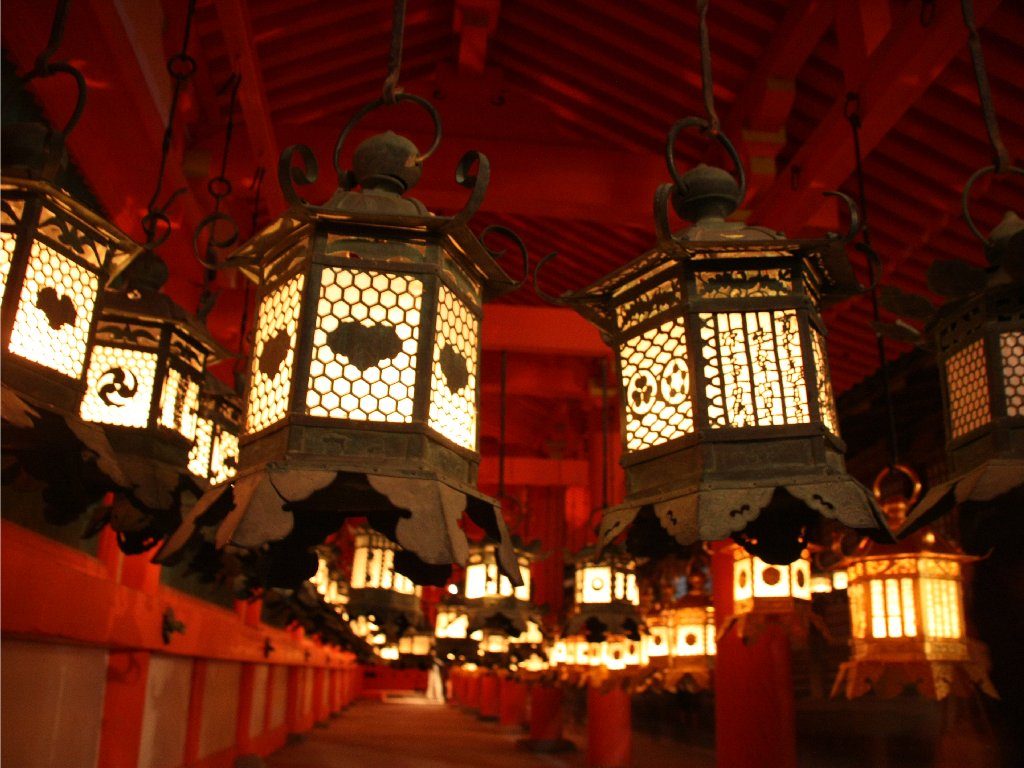 My recommended highlight of Kasuga Taisha Shrine is ･･･

・An approach to a shrine where there is the history

・A lot of garden lanterns

A lot of stone lantern baskets are put on the approach to this shrine. 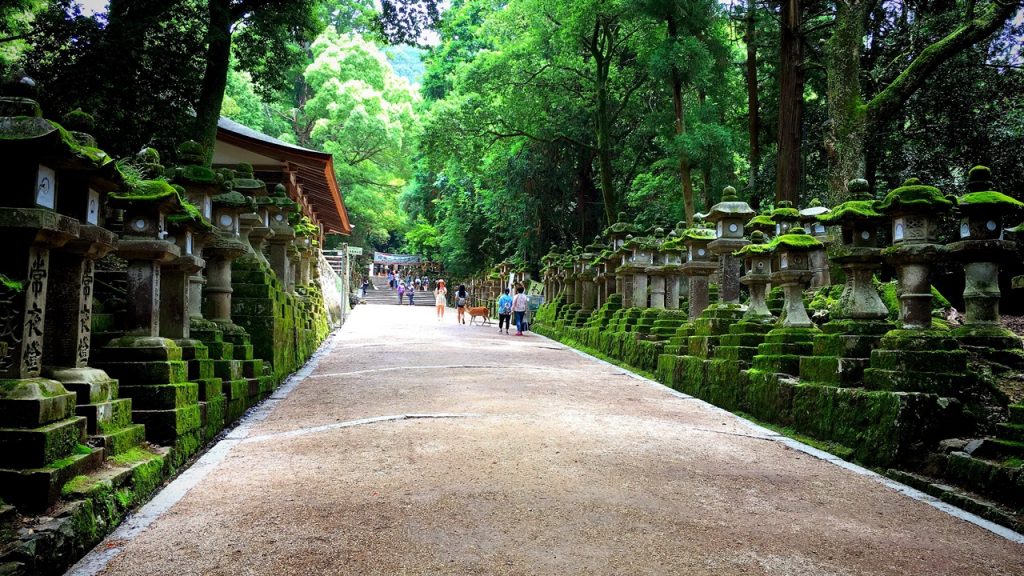 About 2,000 stone lantern baskets are put on this shrine. 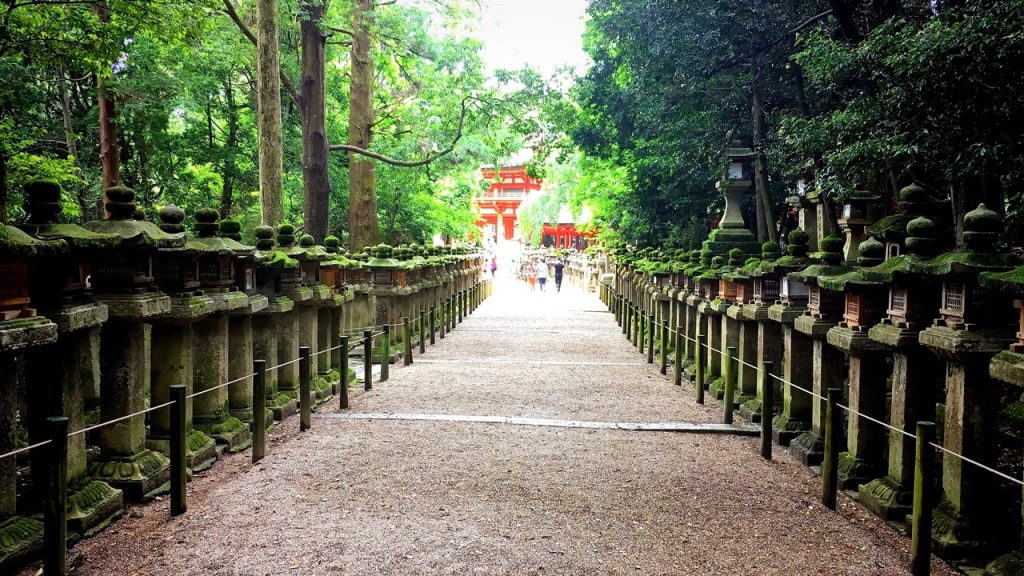 The stone lantern which is covered with moss. 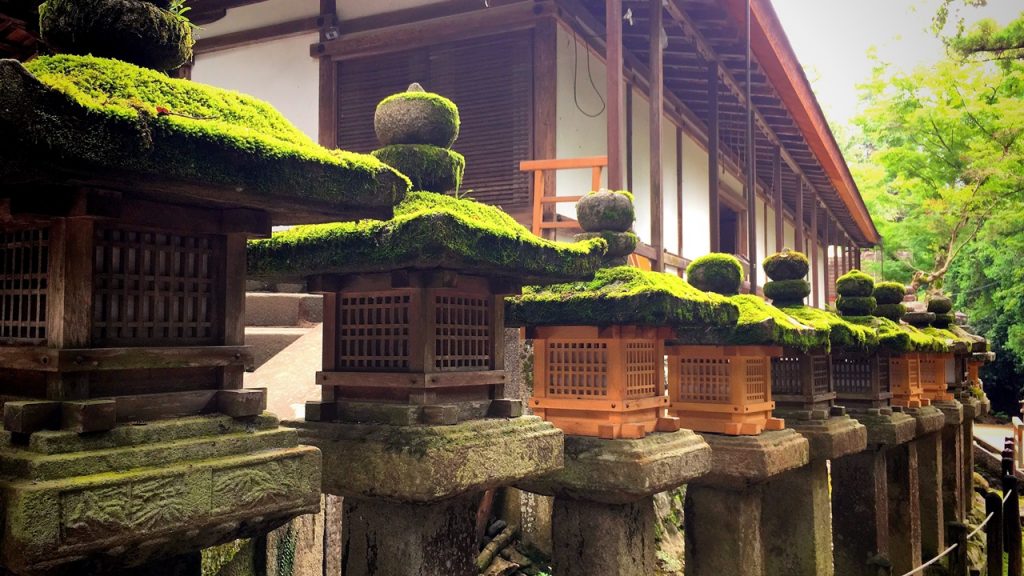 Most garden lanterns are built by oblation from general people. 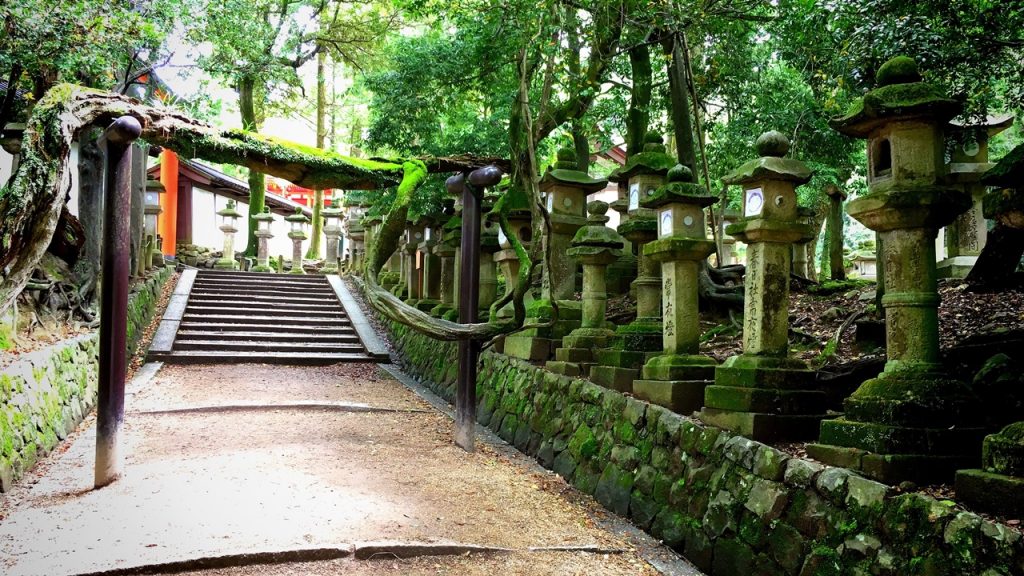 The thought of the person who did oblation on each garden lantern is put. 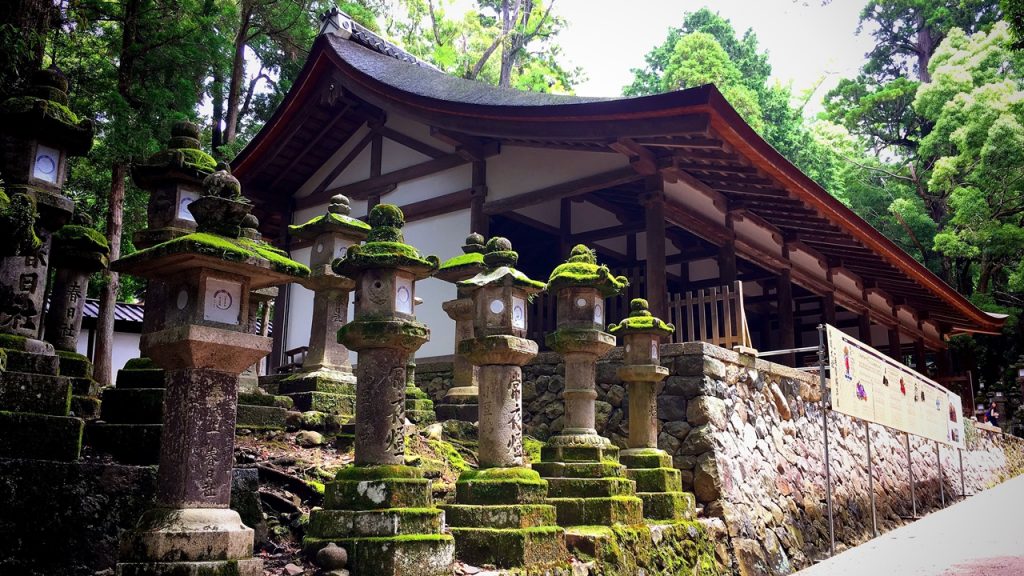 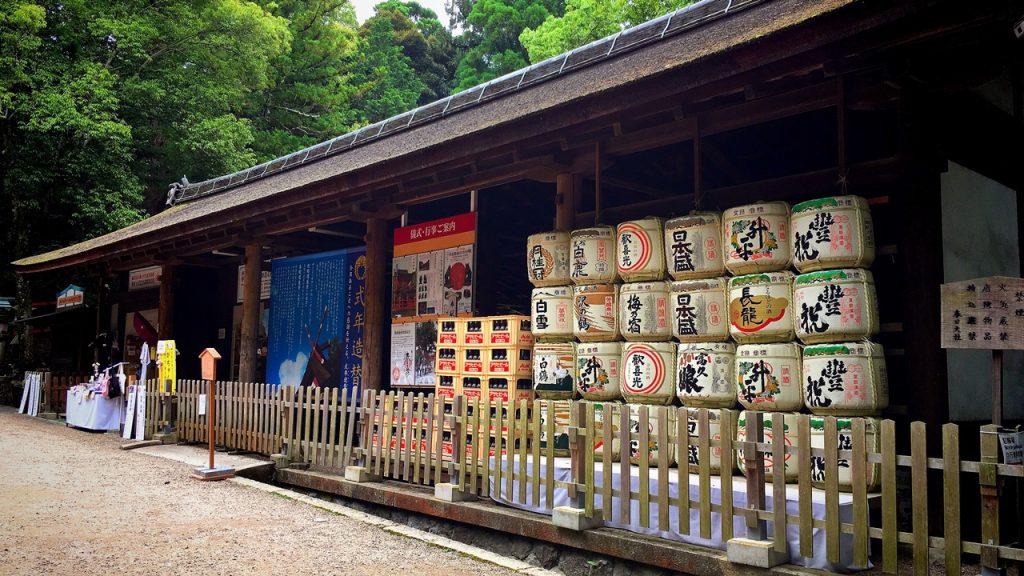 The south gate of Kasuga Taisha Shrine is important cultural property of this countries. 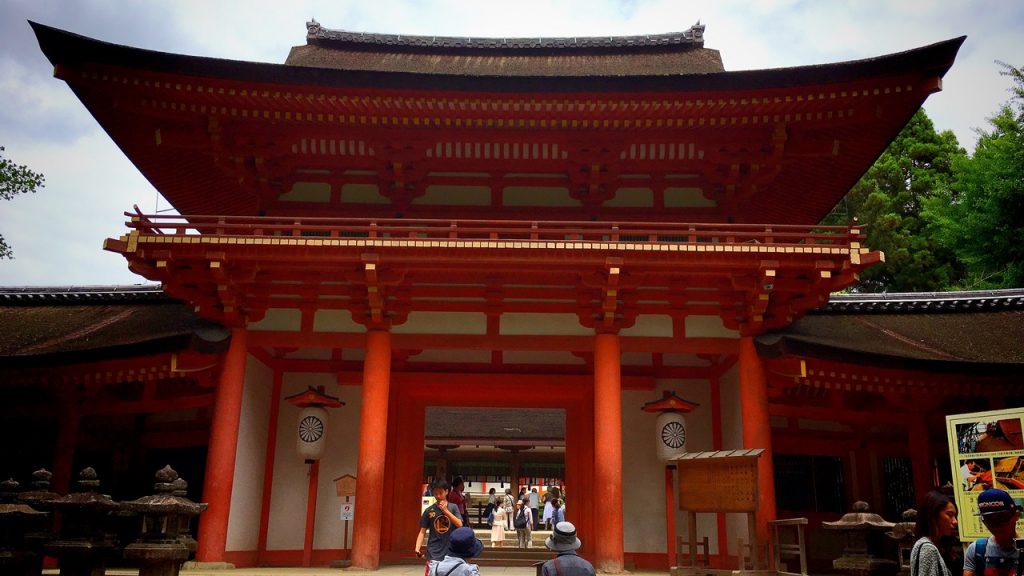 The main shrine is designated as a national treasure. This is a very beautiful cinnabar red palace. d(*ﾟーﾟ*) 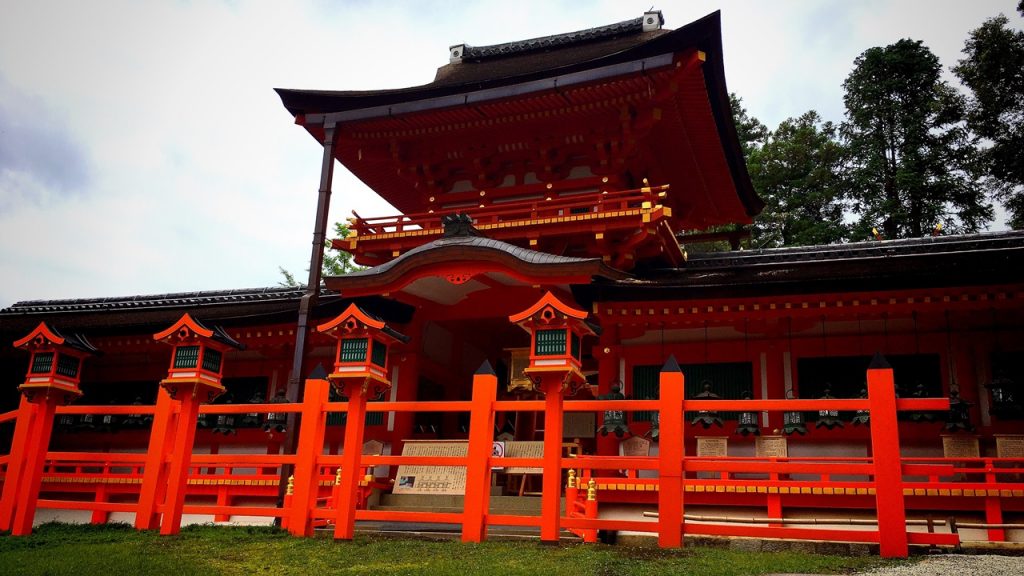 The Priestess who walks the corridor. (○´艸｀) 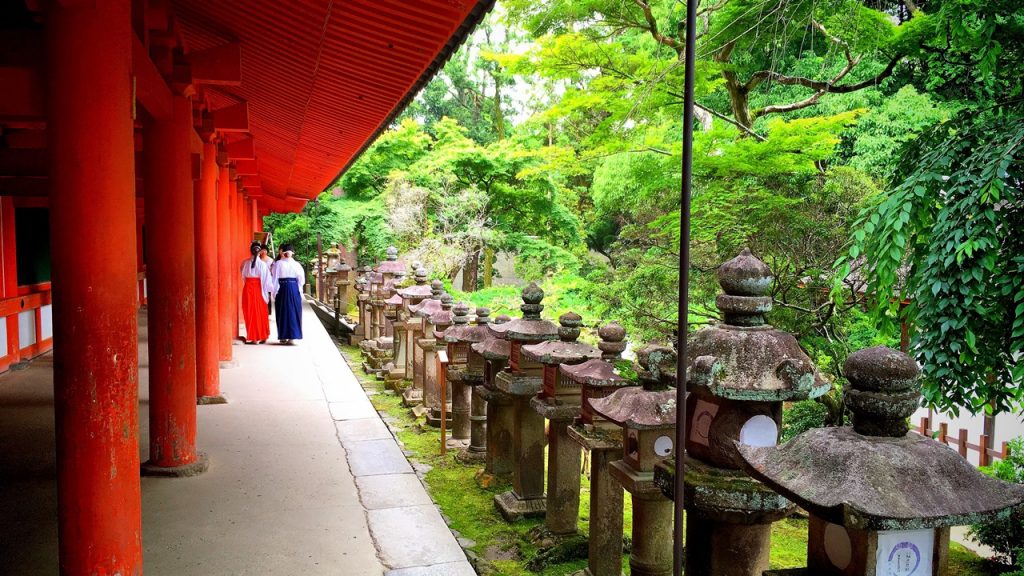 About 1,000 hanging lanterns are displayed in this shrine. 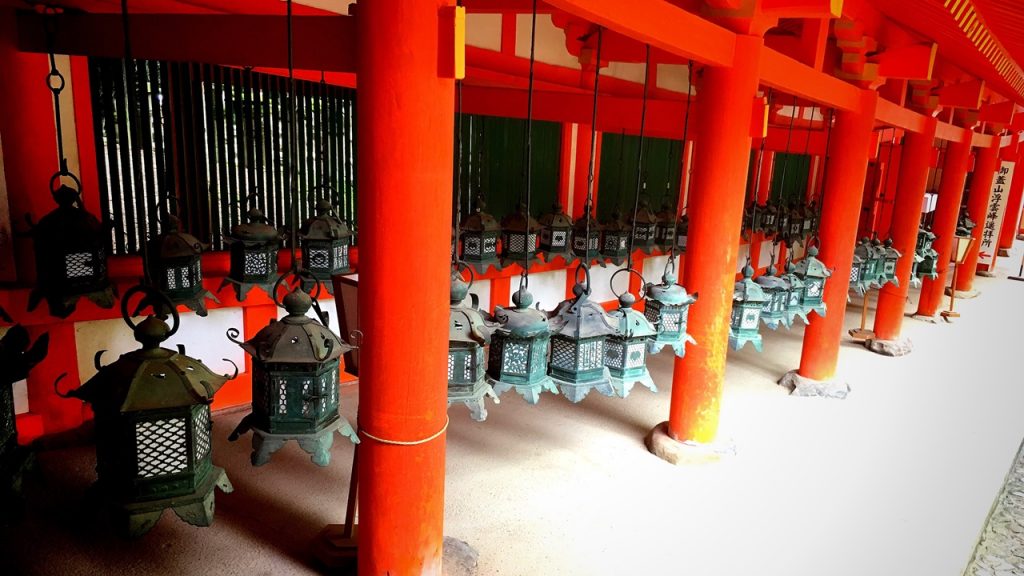 There is the hanging lantern of various form and colors. (○´艸｀) 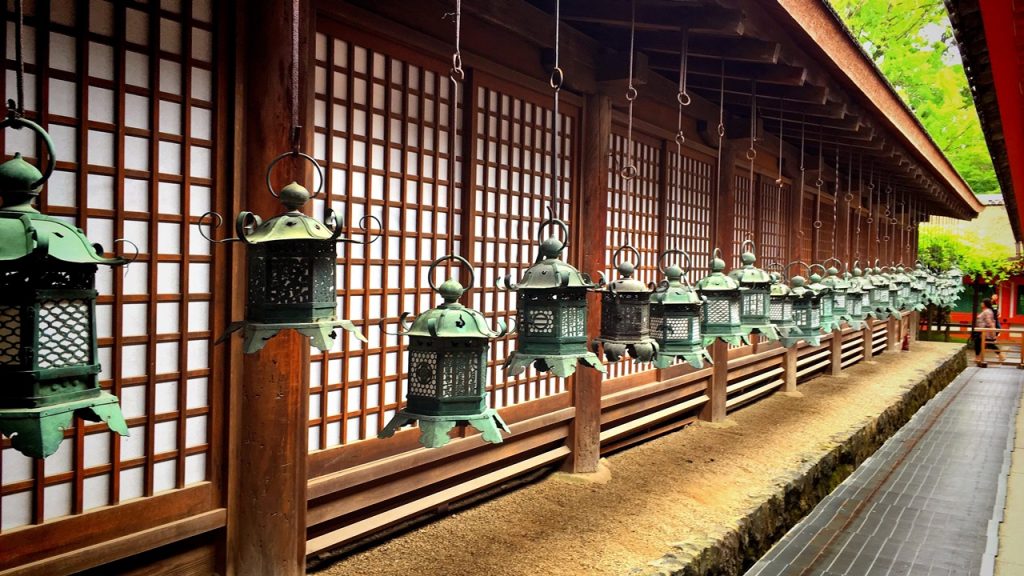 Because there are a lot of garden lanterns that a deer was designed, please look for it. d(*ﾟーﾟ*) 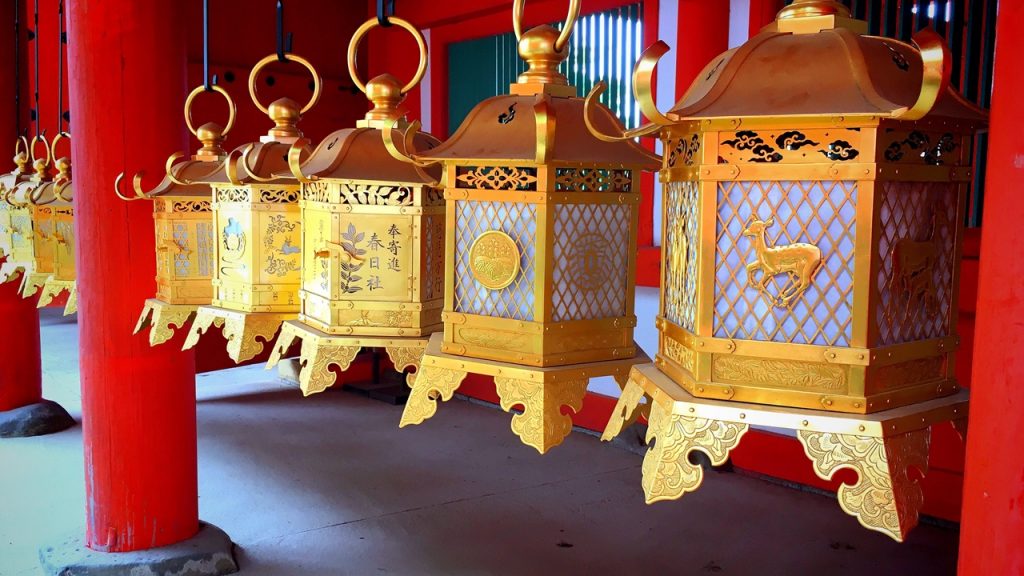 There is the place that reproduced “万燈籠(Mantourou)” called “藤波之屋(Fujinaminoya)” in the back of the main shrine.

Let’s go and worship without forgetting it because the entrance of 藤波之屋(Fujinaminoya) is hard to find.

The garden lanterns which appears in darkness. 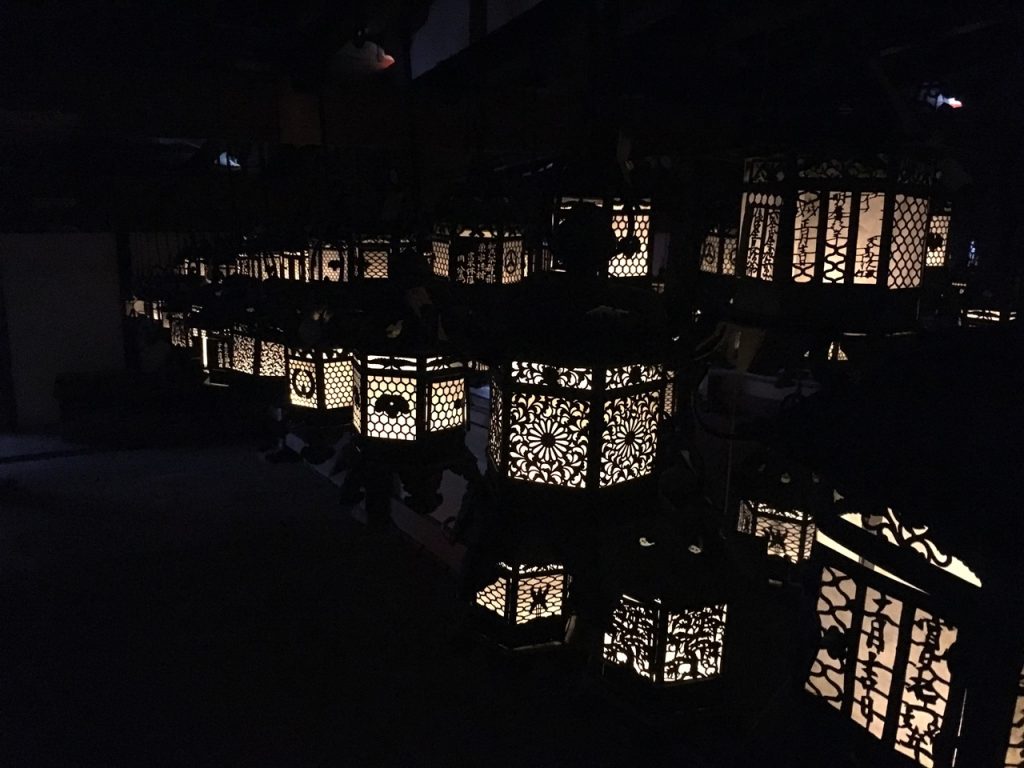 This time, I got a time-limited Goshuin(shrine seal or stamp).
(The commemorative Goshuin of the dedication of a new shrine.) 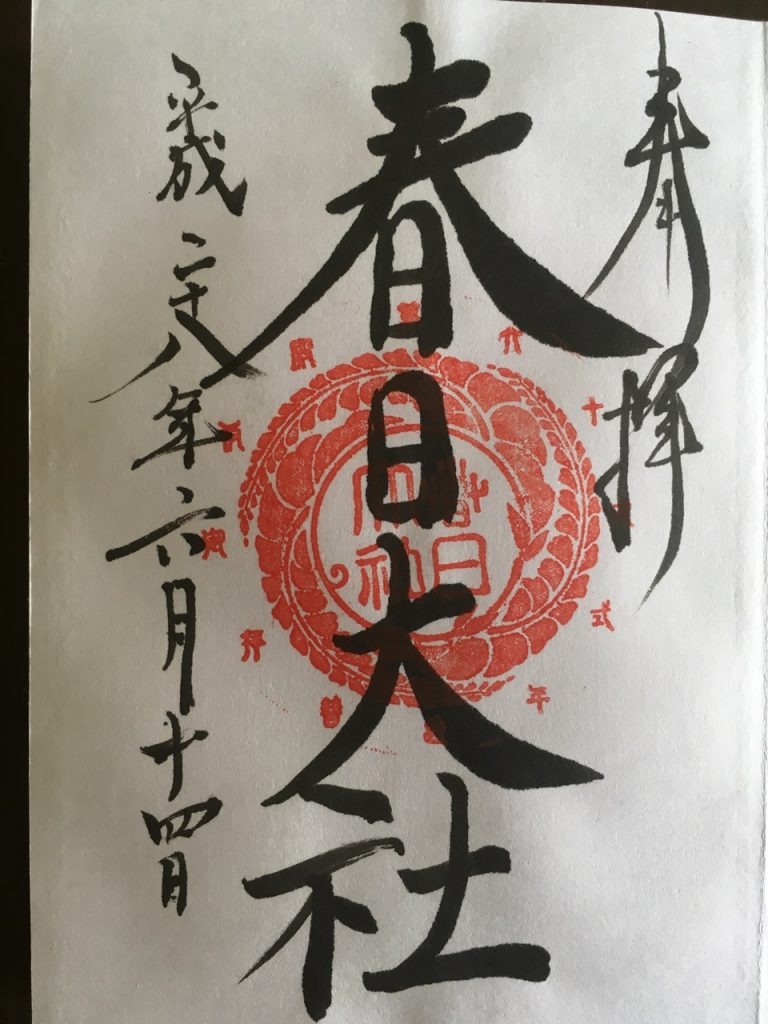 5.How to get to Kasuga Taisha Shrine 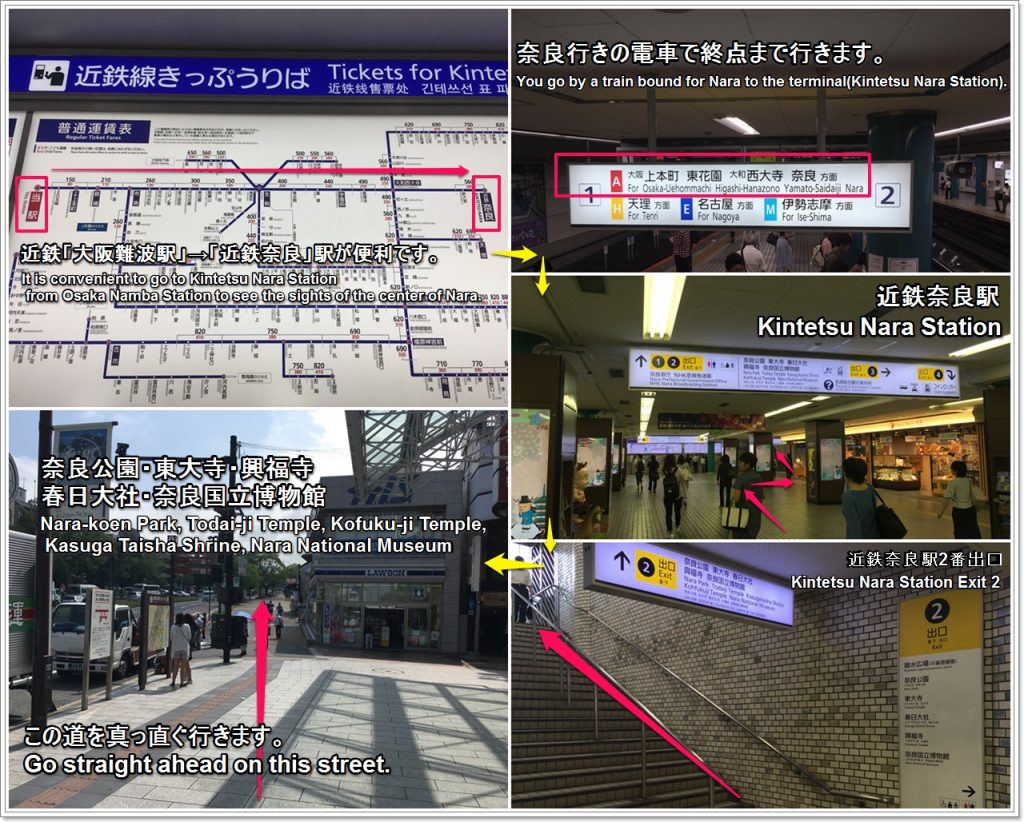